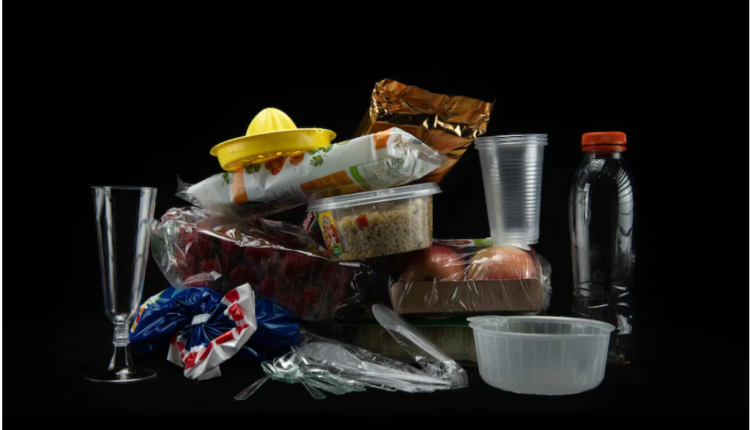 This illustration shows plastic containers, plastic cutlery and plastic-wrapped food packaging containing phthalates, a group of chemicals used by major fast-food brands in products from food-handling gloves to processing equipment, such as industrial tubing and conveyors. A new study says these leach into the food we order at restaurants. (Olivier Morin/AFP/Getty Images)

A new study out Tuesday reports that far too often, small amounts of industrial chemicals called phthalates (pronounced THA-lates), which are used to make plastics soft, have been found in samples of food from popular outlets including McDonald’s, Pizza Hut and Chipotle.

The study found harmful chemicals in a majority of samples collected. Phthalates are linked to health problems, including disruption to the endocrine system, and fertility and reproductive problems, as well as increased risk for learning, attention and behavioral disorders in children.

None of the six restaurant chains responded to requests for comment.

The Food and Drug Administration, which regulates the safety of food, has no legal thresholds limiting phthalate concentrations in food. The levels of phthalates found in the fast food that researchers tested were below the Environmental Protection Agency’s health protective thresholds, Edwards said. Under guidelines, the levels of phthalates researchers found would not have raised alarms at federal agencies.

The FDA said in a statement that it will review the George Washington study and consider it as part of the body of scientific evidence.

“Although the FDA has high safety standards, as new scientific information becomes available, we reevaluate our safety assessments,” said an FDA spokesperson. “Where new information raises safety questions, the FDA may revoke food additive approvals, if the FDA is no longer able to conclude that there is a reasonable certainty of no harm from the authorized use.”

The restaurant food and supply chains are long and there are many places along that chain that food comes in contact with plastics and packaging, said Larry Lynch, senior vice president of science and industry at the National Restaurant Association, which represents the restaurants in question. That said, operators and owners work closely with their suppliers to ensure they have packaging and supplies that meet all FDA guidelines and best practices, Lynch added.

Although some phthalates have been banned from toys and other products, they are frequently used to make such things as rubber gloves, industrial tubing or food conveyor belts pliable and can migrate from those things into the foods we ingest.

All of the foods the GWU researchers tested contained one or more phthalates or other plasticizer chemicals, according to the study, which received funding from foundations that promote liberal or left-leaning policies.

Food items sold by fast-food chains are heavily processed, packaged and handled, providing more opportunities to come into contact with these phthalates and plasticizers. The researchers collected food-handling gloves from many of the restaurants, which also tested positive for these chemicals.

While identifying sources of the chemicals was not part of the study, the researchers hypothesized that the concentration of these chemicals was because phthalates and replacement plasticizers exist throughout the food supply chain, with food coming into contact with packaging and food-handling gloves, as well as processing equipment such as industrial tubing and conveyors, said Edwards, the lead author.

Pizza pockets and late-night fries: How the government is urging food companies and restaurants to reduce our salt consumption

The team also found 86 percent of the foods contained a plasticizer called DEHT, which was developed to replace phthalates, according to Edwards. These alternative non-phthalate plasticizers’ potential effects on human health and the environment are not yet well studied.

In the George Washington University study, foods containing meats had higher levels of phthalates, with chicken burritos and cheeseburgers testing higher for DEHT (gloves collected from the same restaurants also contained this chemical). Cheese pizzas and fries had the lowest levels of most chemicals tested.

Previous research by Zota, a professor of environmental and occupational health at GWU’s Milken School of Public Health, showed that people who often cook their own food at home have lower levels of these chemicals in their bodies, probably because home cooks do not use food handling gloves or as much plastic packaging.

The new report, published in the Journal of Exposure Science and Environmental Epidemiology, is among the first to examine the link between fast food and non-phthalate plasticizers such as DEHT that are increasingly being used in place of banned or restricted phthalates in food packaging and processing equipment.

The study results also raise concerns that people of color and low-income Americans may be disproportionately affected by these chemicals, according to Zota.

“Disadvantaged neighborhoods often have plenty of fast-food outlets but limited access to healthier foods like fruits and vegetables,” Zota said. “Additional research needs to be done to find out whether people living in such food deserts are at higher risk of exposure to these harmful chemicals.”

Edwards said the team selected restaurants that were ranked most popular in each category by market share data, testing multiple outposts for each chain and sampling their best-selling food items, ordering each item with standard toppings or fillings. Items were transported to the lab in a cooler in their original packaging, and then each menu item was blended into a slurry, the liquid tested for these chemicals via a technique called gas chromatography-mass spectrometry.

Ruby on Rails will be dead soon!

Fad diets are out. It’s your lifestyle habits that matter

Citrus trees: how to grow, feed and harvest