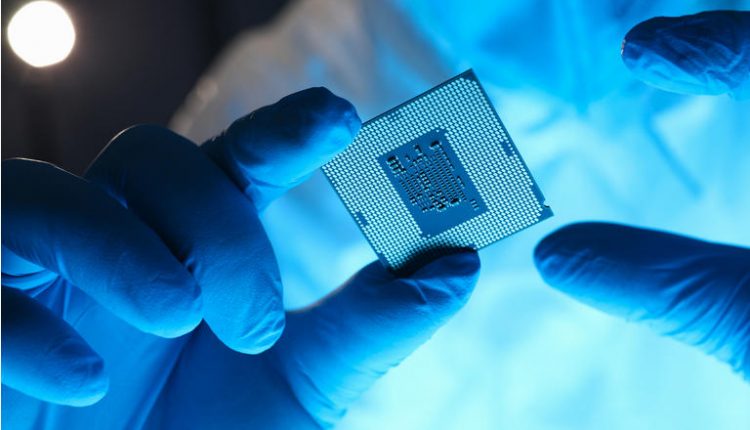 Semiconductor stocks have been hot in the recent past, on the back of a global semiconductor shortage that has been good for margins, and due to long-term growth tailwinds as our lives become ever more digitalized. Two of the highest-valued semiconductor companies are Intel Corporation (INTC) and NVIDIA Corporation (NVDA), and in this report, we will pitch these two against each other to gauge which stock is the better investment. In the end, both have their merits, although, depending on your goals, you will likely prefer one of them over the other.

Intel Corporation has, for a long time, been one of the largest semiconductor companies in the world. It is a leading player by revenue generation, output, and earnings, although its slower growth compared to peers such as NVIDIA and AMD (AMD) is why Intel trades at a substantially lower valuation than other semi stocks. At 12 times this year’s earnings, Intel is currently trading for $56 per share, which is down marginally over the last year. Shares are up by around 70% over the last five years before dividends, which is very solid, but which lags the performance of many other semi stocks, including NVIDIA. Year-to-date, Intel’s shares are up 12% so far, which is very solid again, but which is, at the same time, below par when compared to NVIDIA, although Intel has outperformed AMD so far this year.

NVIDIA Corporation has been one of the greatest investments one could have made over the last couple of years, as shares are up by a whopping 1,460% over the last five years. Even those that entered positions relatively recently have already experienced gains of a little above 40% so far in 2021, easily outperforming most peers and the broad market. At $740 per share, NVIDIA is trading at a pretty high valuation, however, as multiple expansion has been one of the factors driving NVIDIA’s share price performance. NVIDIA is valued at 46 times this year’s expected net profits right now, which equates to a market capitalization of around $460 billion. For reference, that is twice Intel’s market capitalization, while NVIDIA’s earnings multiple is four times as high as that of Intel.

In order to compare these two companies against each other, we will take a look at the respective growth of the two companies, as well as the valuations their shares trade at, and at the shareholder payouts that can be expected. Depending on your own investment goals, time horizon, and risk tolerance, you may weigh these individual metrics differently. Income investors, for example, will, of course, consider dividend payments to a large degree, while those seeking long-term share price appreciation may put more focus on growth potential throughout the next decade.

NVIDIA has delivered a lot more growth than Intel over the last couple of years, as can be seen in the following chart:

Intel’s growth pales in comparison, but that doesn’t mean that Intel’s growth was weak in that time frame. In fact, with earnings per share rising by 115% and cash flow growing by more than 80% in five years, Intel delivered quite substantial growth as well. NVIDIA’s growth, however, was in another dimension, as the company grew its revenue and gross profit by more than 250%, while EPS and cash flows rose by more than 400% in just five years.

This was partially due to the fact that NVIDIA was growing from a smaller base, which makes it easier to maintain high relative growth rates. On top of that, however, NVIDIA also profited to a large degree from tailwinds such as crypto currency mining and gamers’ growing interest in high-powered graphic cards. Last but not least, NVIDIA continues to make gains in areas such as data centers and with its AI chips that can be used, among other use cases, for autonomous vehicle technology. Intel’s product lineup was less centered on high-growth markets, although Intel also benefited from growing data center demand to some degree.

The markets that NVIDIA addresses will likely be higher-growth markets compared to Intel’s core areas over the coming years as well, and on top of that, NVIDIA still is the smaller company by revenue, which means that maintaining higher relative growth will be easier. It is thus not really surprising to see that the analyst consensus estimate foresees higher growth for NVIDIA compared to Intel:

Intel is expected to see earnings per share growth of 2% in 2022 and of 5% in 2023, while analysts are forecasting that INTC will grow its EPS by 8% in the long run. NVIDIA, meanwhile, is expected to grow its EPS by 9% in 2022 and by 14% in 2023, while analysts are forecasting a long-term growth rate of 24% a year. Clearly, NVIDIA is the higher-growth pick, although it remains to be seen whether a 24% growth rate can be maintained throughout the 2020s. Growth will, I believe, eventually slow down, as another 9-fold increase in EPS over the next decade seems a little aggressive to me.

As stated earlier, NVIDIA trades at roughly 4x the P/E ratio INTC trades at, with shares trading for 46x and 12x this year’s forecasted EPS, respectively. NVIDIA, due to its higher growth and more attractive end markets naturally deserves a higher earnings multiple, but whether it should really trade at a 300% premium to Intel can be debated. Intel’s shares are currently inexpensive relative to how they were valued historically: 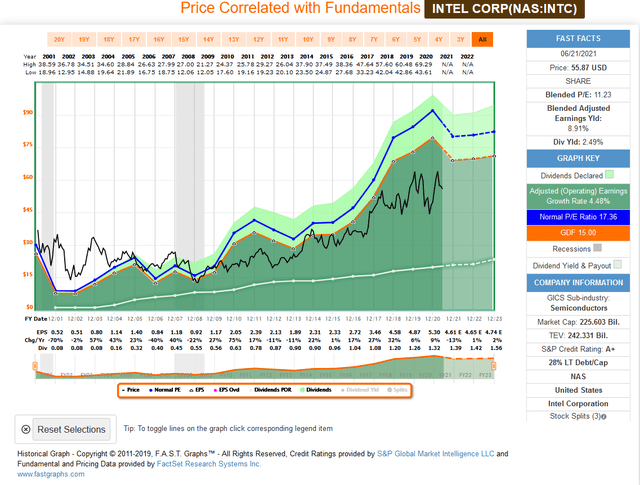 As we see in the above chart, Intel used to trade at a mid-to-high teens earnings multiple, whereas, right now, at 12 times net profits, shares seem rather inexpensive. One can argue, of course, that this is justified due to the fact that competition in the data center market has been heating up over the last couple of years. But, on the other hand, a discount compared to the historic valuation could also lead to upside potential over the coming years, as Intel’s valuation may very well expand to 15 times earnings, which would still not be high.

NVIDIA, on the other hand, trades at a premium compared to how shares were valued in the past, and this could hurt the stock’s total returns over the coming years. NVIDIA’s 10-year median earnings multiple is 29, according to YCharts, which indicates that shares are rather expensive today. This may not necessarily be a major problem, but multiple normalization definitely could eat into NVIDIA’s returns over the coming years. 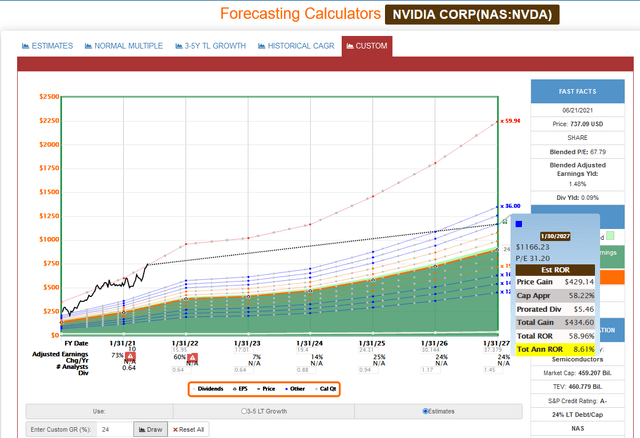 The above chart shows what NVIDIA’s returns could look like over the coming years if growth comes in as expected, while the stock’s earnings multiple declines to 31. In this scenario, NVIDIA would return about 8%-9% a year, which would not at all be bad. But, then again, returns would be significantly lower than they were over the last couple of years. Thus, NVIDIA’s elevated earnings multiple is something that investors should keep an eye on, I believe.

On an income basis, Intel clearly is the better choice. The massive gains for NVIDIA’s shares in the recent past have made its dividend yield decline to just 0.1%, and NVIDIA doesn’t seem interested in raising its dividend meaningfully. Intel, on the other hand, offers a dividend yield of 2.5%, and the company has raised its dividend regularly, with a 6.1% increase in early 2021. The combination of a 2.5% dividend yield and a 6% growth rate is not unattractive, although this doesn’t make INTC an outstanding income investment, either.

Is Intel Or NVIDIA Stock The Better Buy?

It is pretty obvious, in retrospect, that NVIDIA was the better buy five years ago – even though INTC was not a bad buy in 2016, either. But, today, with NVIDIA trading at a premium to the historic average, while INTC trades at a discount to its historic valuation, things are less clear.

One can expect, I believe, solid returns from both companies. The above chart shows that high-single-digit total returns from NVIDIA seem realistic when we assume that its earnings multiple will eventually head back to around 30, where it was in the past. Intel, at the same time, through its dividend and some earnings per share growth, could deliver similar returns in the future, too. In Intel’s case, shares do seem to have short-term upside potential in case its multiple heads back to where it was in the past. But, then again, NVIDIA is the company that gains market share, so growth investors may continue to pile into the stock, which would mean that it is possible for NVIDIA to see more near-term gains as well, even though shares are already trading at a premium.

For income investors the choice seems clear, but for everyone else, both companies seem like solid long-term picks to me at current prices. It seems, I think, realistic that investors will see returns of 7%-10% a year in the long run from both companies. Neither of the two is looking like an outrageously strong buy at today’s prices, but both look like solid investments, with your individual taste and strategy dictating which of these is the better choice for you.

Is This an Income Stream Which Induces Fear?

The primary goal of the Cash Flow Kingdom Income Portfolio is to produce an overall yield in the 7% – 10% range. We accomplish this by combining several different income streams to form an attractive, steady portfolio payout. The portfolio’s price can fluctuate, but the income stream remains consistent.

Upgrade to the New Windows 11