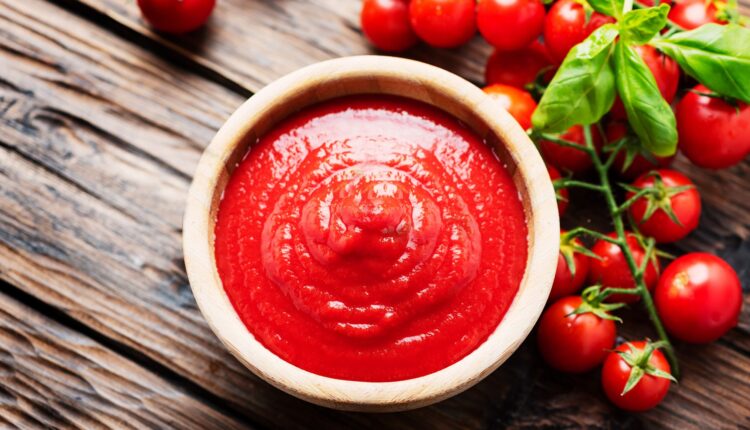 Tomato ketchup and brown sauce :The perfect present for the classic condiment fan in your life: the richer, more complex flavour of these homemade versions of two much-loved sauces will bring joy to the breakfast table well into the new year. Choose their favourite, or encourage them to expand their culinary horizons by giving them one of each. You never know, you might change their life.

1 Roast the tomatoes for the ketchup

For the ketchup, heat the oven to 180C (160C fan)/350F/gas 4. Arrange the tomatoes on a lightly greased baking sheet and bake for about 30-40 minutes, until very soft and beginning to collapse. (I like to use plum tomatoes, but ketchup is a great use for any slightly disappointing winter tomato.)

Push the roast tomatoes through a sieve into a large saucepan, regularly scraping the underside of the sieve to speed things up and working hard to ensure you get as much of the flesh through as possible – by the time you’re done, you should be left with just papery skin and seeds in the sieve, which you can now scrape out and discard.

Peel the shallots and garlic, and lightly crush both by squashing them with the flat of a large knife. Add these to the tomato pan along with the sugar, vinegar and chillies – I use four, but if you’re less keen on heat, or using very intense varieties, you may wish to halve the amount.

4 Cook until thick, then season and jar

Bring to a boil, then turn down the heat and simmer, stirring regularly, for about 20-25 minutes, until thick. Take off the heat, leave to cool a little, then scoop out and discard the solid elements and stir in salt and any other seasonings you fancy (ground allspice or cumin and coriander, for example, or garam masala) to taste. Store in sterilised jars, preferably in the fridge, where it should keep for up to three months.

1 Steep the tomatoes for the brown sauce

Roughly chop the tomatoes and put them, seeds, juices and all, in a bowl. Sprinkle with the salt, stir and leave to steep for about an hour (a bit longer won’t hurt), then drain and discard the salty liquid exuded by the tomatoes.

Meanwhile, peel and core the apple, and peel the red onion, garlic and ginger. Roughly chop the apple, onion, ginger and dates, and finely chop the garlic. Put all these in a large pan with the tomatoes, apple juice, tamarind, vinegar, treacle and 100ml water. (Note: tamarind pastes vary in strength, so I’ve given a conservative amount here, which you can adjust later.)

3 Cook down to a pulp

Bring to a boil, leave to bubble away merrily for five minutes, then turn down the heat to medium-low and simmer gently until the contents are soft and pulpy and starting to break down and merge into each other. Towards the end, stir occasionally to stop the mix catching and burning.

Take off the heat, leave to cool slightly, then blitz the mix with a stick blender (or use a jug blender) to reduce it to a puree, taking care because it will still be very hot. Crush the cloves and mustard seeds to a powder, then stir these into the sauce with the ground allspice and cinnamon.

5 Reduce to thicken, then jar up

Bring the pan back to a boil, then turn down the heat and simmer, stirring often, for another 30 or so minutes, until thick; remember that the sauce will thicken further as it cools. Season with salt, more tamarind or any of the spices, as you see fit, then decant into sterilised jars and store, preferably in the fridge, where it should keep for up to three months.