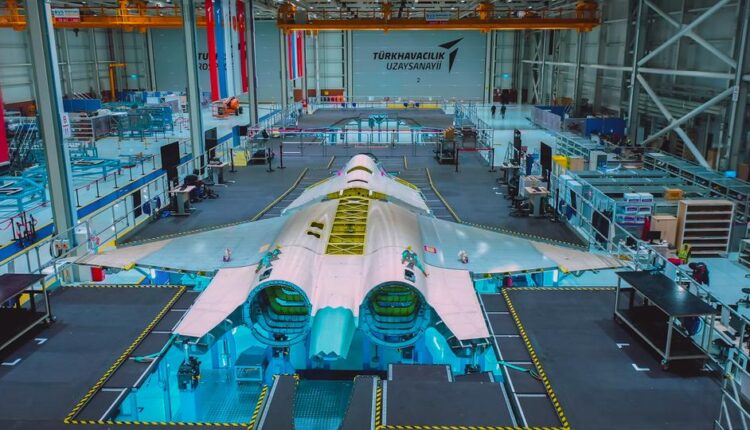 The hurdles in the path of building the 5th generation TF-X multi-role combat aircraft has only spurred Türkiye’s defence industry towards bigger success.

A video released by Ismail Demir, President of the Defence Industry Agency, on November 23 shows that the first prototype of Türkiye’s indigenously built fighter jet TF-X has entered the final assembly line at the facilities of TUSAS, the Turkish Aerospace Industries.

The fighter is expected to be rolled out in March 2023 and make its first flight in either 2025 or 2026. Entry into service is not expected before 2030. While the Turkish defence industry has gained a reputation for the production of Unmanned Combat Aerial Vehicles (UCAVs) and more advanced armed drones are in the making, producing a 5th generation fighter – bypassing a 4th generation aircraft – will be a first for the sector.

The future Turkish fighter – also known as the Milli Muharip Ucak (MMU) or National Combat Aircraft – is a multirole stealth aircraft having air-to-surface and air-to-air combat capabilities. The strong and agile jet will be powered by twin engines, each providing 30.000 lb. thrust with an afterburner. General Electric’s F110 engines, which are already powering the highly efficient F-16s, have been fitted in TF-X’s first five prototypes. The Turkish Aerospace Industries has already bought ten engines for this purpose.

In case the producer company TUSAS faces any sanctions from the US administration – which has created multiple problems for Türkiye in its quest for a multi-role fighter jet – it plans to provide engines from other suppliers. Yet, the Turkish government does not want to assemble a foreign engine during mass production. Hence it has ordered a few Turkish companies, such as TUSAS Engine Industries Inc. (TEI) and Kale Kalip Incorporated Company, to develop an indigenous engine alone or together with foreign partners.

TEI has already produced a TF-6000 engine providing 10.000 lb. of thrust with an afterburner. TEI’s General Manager, Mahmut Aksit, asserts that they can produce an engine with 35.000 lb. of thrust by increasing the TF-6000’s capacity. Some anonymous sources also said that TEI has enough know-how thanks to the collaboration with foreign partners.

TUSAS collaborated with the British BAE Systems for the design. TF-X will have a design for low radar cross-sectional density, internal weapons bays, the ability to supercruise, high precision stand-off weapons, low observability, and optimised combat radius. Electronic equipment, radars, and avionics will be supplied by Turkish companies. With a length of 21 metres, a width of 14 metres, and standing a height of 6 metres, the TF-X is expected to have a cruise speed of 1.8 mach with a maximum speed of 2.2 mach. Its size will be bigger than the F-35 but a bit smaller than the F-22.

The Turkish government is very eager to see its home-made jet flying as soon as possible since it has become a necessity and will be a force multiplier in many aspects. First of all, the National Combat Aircraft, which is yet to be named, will replace the ageing fleet of about 240 F-16s.

The plan was to buy F-35As to replace the F-4E-2000 jets so that the former could fly alongside Turkish F-16s. But procuring F-35s does not look possible in the short term as Turkish-American relations have been severed due to various reasons, including Türkiye’s procurement of S-400 missiles from Russia. As a solution, the Turkish Air Force has revised its fleet plans and decided to prolong the lifetime of its F-16s either with the help of Americans or locally. In this way, Türkiye will gain time to produce the TF-Xs and put them into service.

In addition, when Türkiye was in the F-35 programme, Turkish companies supplied components to Lockheed Martin, creating a lucrative revenue for Turkish suppliers. After removal from the partnership, Pentagon announced Türkiye will continue manufacturing components for F-35 fighter jets through 2022.

With the commencement of the TF-X project, this economic activity will resume, and perhaps even more revenue will be generated, including export revenues. Thus, the fighter will be a lifeline for Turkish defence. Besides, the Turkish army will acquire jets at a lower cost.

Among all advantages, being self-sufficient and independent of foreign jet vendors will be the most conspicuous benefit. Türkiye is almost 100 percent dependent on the US, as of now, when it comes to fighter jets.

Buying defence equipment from European countries might also not be possible due to the US pressure and diplomatic rifts between Türkiye and some European countries. Therefore, when TF-X flies in the sky, embargoes will have no effect on the Turkish military’s weapons supply. In this way, Turkish Air Forces will have absolute superiority in the region.

On the other hand, as the fighter is taking shape, most probably, friendly countries will show their interest in it sooner or later. TUSAS’s head Temel Kotil has already called on other nations to partner with them. There are rumours that at least two countries will join the project. It will not be surprising if more governments announce their participation in the TF-X programme after the first flight. In this regard, the funding problem particularly will be resolved, and more progress can be made.

There are, of course, challenges such as blueprint, component production, and embargoes but Türkiye’s ambition to produce TF-X is quite promising. Just ten years ago, it was claimed that Türkiye could not produce drones, missiles, helicopters, engines, etc., but currently, it has the most famous drones, air defence missiles with a 100 km range, and land-to-land missiles with a 600-km range.

Soon, the Türkiye’s-made Gokbey helicopter will fly with TEI’s TS-1400 engine. Past and ongoing successes indicate that the Turkish government and defence industry have moved ahead in an irreversible way, and all hurdles before the TF-X project have only had a motivating impact on the Turkish dream.