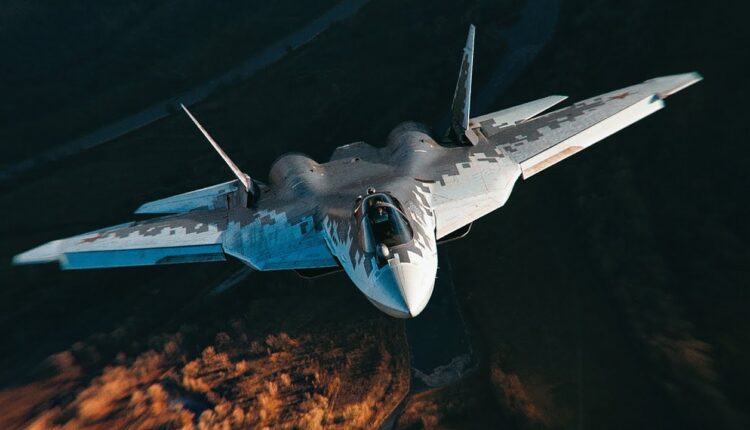 In May, the Russian state-owned media, TASS, reported that the Russian military has been using Su-57 fighters in the ongoing Ukraine war for two or three weeks after the onset of the Russian assault on Ukraine.

The claims made by the TASS news agency were followed by a report on June 9 from another Russian state-owned media, Ria Novosti, which said, based on the information from a source, that four Su-57 fighter jets operating in a network, identified and destroyed Ukrainian air defense systems.

These claims so far remain unverified, but a video surfaced on the internet allegedly showing a Su-57 fighter jet flying over the Zhytomyr region of Ukraine. There were speculations at the time that Russia’s Southern Military District deployed the jet.

According to the TASS, the Su-57 has been operating outside the kill zone of Ukrainian air defense systems using missiles. Experts suggest that the aircraft may be operating within the safety of the Russian airspace, only firing stand-off missiles at Ukrainian targets.

If true, this would mean a minimal role for Russia’s first stealth aircraft and the only fifth-generation fighter jet which Russia touts as an airplane that surpasses the F-22 and F-35.

Suppose the Su-57 is as stealthy as its American peers, in that case, it can be expected the plane to be able to fly undetected inside the Ukrainian airspace to suppress enemy air defenses, experts commented.

Billie Flynn, a former F-35 Lightning II Senior Experimental Test Pilot, agreed with this suggestion when asked about it by EurAsian Times.

He said, “Su-57 is not survivable in a high threat SAM (surface-to-air missile) environment at this point in its development, so would not be deployed within range of any Ukrainian SAMs.”

Moreover, it is also the question of whether Russia has enough Su-57s to make any meaningful impact on the course of the ongoing war in Ukraine, where the Russian military has failed to establish control over the skies.

“There are not enough Su-57 operating to make any appreciable contribution to the invasion of Ukraine,” Flynn told EurAsian Times.

As of March, the Russian Su-57 fleet appeared to have only three aircraft, according to a EurAsian Times report.

One of the two aircraft delivered in 2021 had the number ’52’ written in blue on its airframe, suggesting it was the fourth, and the third could be numbered ’51’.

However, the latest reports from May indicate that two more serially produced aircraft might have joined the VKS’ Su-57 fleet.

According to Russian-language news and social media, two new serially produced Su-57 with airframes numbered ’53’ and ’54’ in red were spotted at the Novosibirsk Tolmachevo Airport in Siberia, Russia, in late May.

Therefore, Russia may have five Su-57s, excluding the prototypes.

When asked about the claims made by Ria Novosti of four Su-57s operating in a network to destroy Ukrainian air defense systems, Flynn said he did not think it was likely, as “four Su-57 jets over enemy territory without adequate self-protection would have put those scarce assets at significant risk.”

“The press release makes for good public relations but is inaccurate,” he continued.

Flynn thinks it is unlikely that the Su-57 is being deployed and used for any measurable effectiveness in Ukraine. According to him, the Su-57 remains a “tactically immature platform” which is not ready for a highly contested combat environment.

“Ukraine is not Syria, where the Su-57 was observed earlier. The risks are far too great, and the chances of survivability diminish when facing the capable and still lethal Ukrainian air defense forces,” said Flynn when asked how much of a role he saw for this platform in the ongoing war, assuming Russia is indeed using the Su-57 against Ukraine.