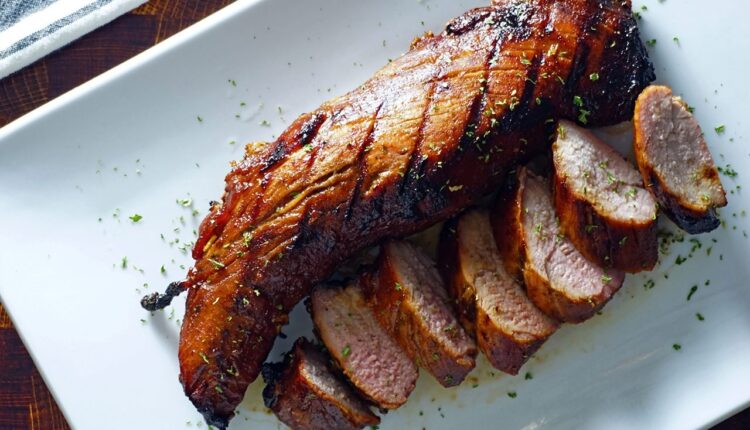 For many home cooks, firing up the grill to create a meal can feel intimidating, especially when cooking a piece of meat seldom used in their kitchen. But Chef Dale Talde, a Top Chef alum and the host of Tastemade’s All Up In My Grill video series, says there’s no reason to be nervous when grilling pork tenderloin this summer season.

“We all need more in our life,” Talde says of the other white meat. In his own kitchen, the process for perfectly grilled pork loin begins hours before grill time.

How to brine pork loin for grilling

“I like brining it first,” says Talde. “So putting it in a salt, sugar and water solution: If you have a pork loin, bone-in or bone-out, cut it into about one-inch medallions and then put it in the brine for an hour to an hour and a half. [Brine it for] two hours if you can, the longer the better, but no more than 24 hours.”

Talde says brining, the process of soaking meat in salty water to tenderize it and make it juicier, will ensure the pork loin stays moist and tender throughout the cooking process — while adding some great flavor, too.

How to season pork loin for grilling

To add even more flavor, coating the outside of the pork loin with more than just salt and pepper is imperative.

“I love sweet and spicy [seasonings] with pork,” says Talde. “So brown sugar, cayenne, paprika, coriander, cumin, garlic powder — any of the traditional barbeque rubs. For me, of course, it’s awesome to make your own, but there are so many good rubs out there … I think find your own rub [with] the flavor profiles you’re looking for.”

How to grill pork tenderloin

While Talde makes it all sound simple, he understands why pork can be intimidating.

“There are different cuts,” he tells Yahoo Life. “It’s not like steak where you get a rib eye, a New York, a porterhouse, a hanger steak — cooking it hot and fast, getting a sear on it, cooking it to medium, slicing it.”

“With pork it’s like, the pork shoulder needs to be a long and slow braise or pork ribs [need to be cooked] low and slow,” he continues, “and I think for people there are some shocks still from having bad pork loins that have been cooked for way too long and are dry and almost crumbly.”

Once brining and seasoning have been completed, it’s time to head to the grill. Talde has some pointers to ensure that grilling pork tenderloin is simple and results in a delicious final product.

“And I like it directly on the grill,” he says. “If you’re pan-searing [the pork tenderloin], maybe wrap it in bacon or prosciutto, but on the grill, you’re already dealing with so many variables, so let the pork and the smoke speak for itself.”

For grilling pork tenderloin, Talde says hardwood or charcoal is the best heat source. “If you’re going to smoke anything, pork is the number one thing,” he says. “If you can’t get a hardwood or charcoal grill and you’re using gas, make sure the sauce you’re pairing with your pork is a little smokey.”

When it’s time to plate your grilled pork loin, Talde says a flavorful sauce is the perfect accessory.

“Some care and a little bit of finesse goes a long way, and you have to have a sauce with it,” he says. “I love an Argentinian red chimichurri with sherry vinegar and smoked paprika, tons of parsley, cilantro and garlic — but [whatever your taste preferences are], it needs a sauce.”

“Even a doctored-up barbeque sauce,” he adds, “a mustard-based sauce is fantastic with pork.”

What side dishes go with grilled pork tenderloin?

Once the pork is seasoned and grilled to perfection, the last step is to plate it up with a side dish that compliments its rich bold flavors. Goodbye to the days of dry pork and mashed potatoes: Talde suggests a lighter and more refreshing accompaniment for the summer.

“Fruit pairs very well with pork — peaches, nectarines, stone fruits — anything in season right now, lightly grilled with a glaze of honey and vinegar and mustard, maybe,” he says. “I love lettuce: Simply dressed lettuce with a protein like that makes a great light mid-week meal. I love when you’re not relying on heavy starches [and instead serve] a couple of pork medallions, some greens and some fruit to accompany it.”

To assemble: Slice the pork chops and top with the sliced peaches. Dress it all with the bacon mustard vinaigrette.

Russia Knows Nothing Can Stop The B-2 Spirit Stealth Bomber