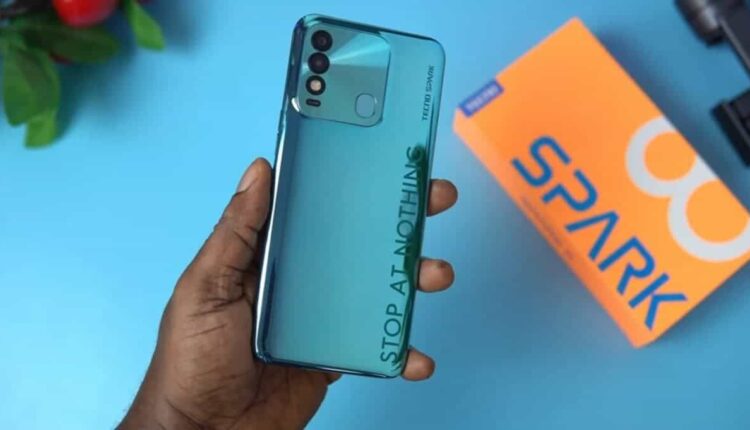 While nothing is set in stone yet, a noted tipster has already shared renders of the Tecno Spark 8P smartphone. As expected, the leaked renders give us a clearer idea of how the phone looks. Aside from that, it showcases some of its notable features including the rear panel, camera module, and more. Furthermore, the leaker has revealed the phone’s color options, battery capacity, and a myriad of other details.

In his latest tweet, tipster Paras Guglani (@passionategeekz) claims that the Tecno Spark 8P will sport a mammoth 6.6-inch display. This screen could offer an HD+ resolution. Furthermore, he suggests that the screen will have a waterdrop notch to house the front shooter. The bezels are noticeably narrow on three sides, while the chin at the bottom is relatively larger.

As far as the rear panel design is concerned, the leaked renders show a dual pattern design. The bottom features a textured design, while the rear-mounted camera module is housed on a glossy panel. In the optics department, the phone houses a triple camera setup at the back. This includes a 50MP main camera. Regrettably, details about the other two sensors are still scarce.

However, it could be a 2MP depth sensor and a 2MP macro lens, according to a report from MySmartPrice. Furthermore, the phone could pack a powerful MediaTek Helio G70 SoC under the hood. It is likely to ship with 4GB of RAM and offer 128GB of built-in storage capacity. Aside from that, the phone could draw its juices from a 5,000mAh battery that supports quick charging.

Also, the Tecno Spark 8P is likely to go on sale in four appealing color options. This comprises Cocoa Gold, Iris Purple, Atlantic Blue, and a Turquoise Cyan colorway. Moreover, the fingerprint scanner will probably appear on the side edge, along with a DTS stereo speaker setup. Tecno is still mum on the phone’s exact launch date, pricing, and availability. However, more shreds of information about the handset are likely to surface online in the next few days.