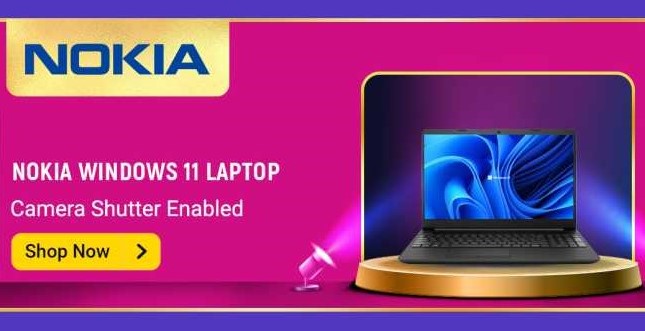 The Indian festive season will begin in the coming weeks, and Flipkart will embrace it with The Big Billion Days sale. It will also uncover new Nokia products during/before the sale, including a Nokia Windows 11 laptop.

Flipkart and Nokia are not promoting the laptop as much as they are promoting the upcoming Nokia Android 11 TVs, so not much is known about the device except that it features a camera shutter and involves some Dolby technology. However, if we go by a teaser that was live on the Flipkart application for a day, then the new laptop will possibly be called the Nokia PureBook S14.

For the uninitiated, the previous laptop was named Nokia PureBook X14.

Anyways, this new laptop might have already appeared on Geekbench in the form of NKi511TL165S. The model number is in line with what Flipkart follows for the Nokia laptops. It was tested while it was running “Microsoft Windows 11 Home Single Language (64-bit).”

The laptop recorded a score of 3502 in the multi-core test and 1213 in the single-core test with one of the Tiger Lake processors, i.e., an 11th Generation Intel Core i5-1135G7 processor and dual-channel 16 GB RAM (DDR4 SDRAM).

Given that the second last character in the laptop’s model number is 5, the amount of internal storage will possibly be 512 GB. Apart from that, Flipkart updated the teaser page and revealed that the new Nokia laptop will be available starting October 3, but the launch might happen earlier.