The Intel ARC Alchemist GPUs will be heading out to the consumer segment on both desktops and laptops in Q1 2022 however, we have seen various entries of these chips ahead of launch. Intel has been evaluating its next-gen graphics on Rocket Lake, Tiger Lake, and Alder Lake platforms and the latest entry was tested on the Tiger Lake 11th gen reference platform.

The chip shows up with 512 Xe Cores (Compute Units) which equals 4096 ALUs. The chip is clocked at 1800 MHz which is reportedly the maximum frequency it could reach but considering that this is still an early sample, final variants could clock much higher considering Intel is using TSMC’s latest 6nm process node. 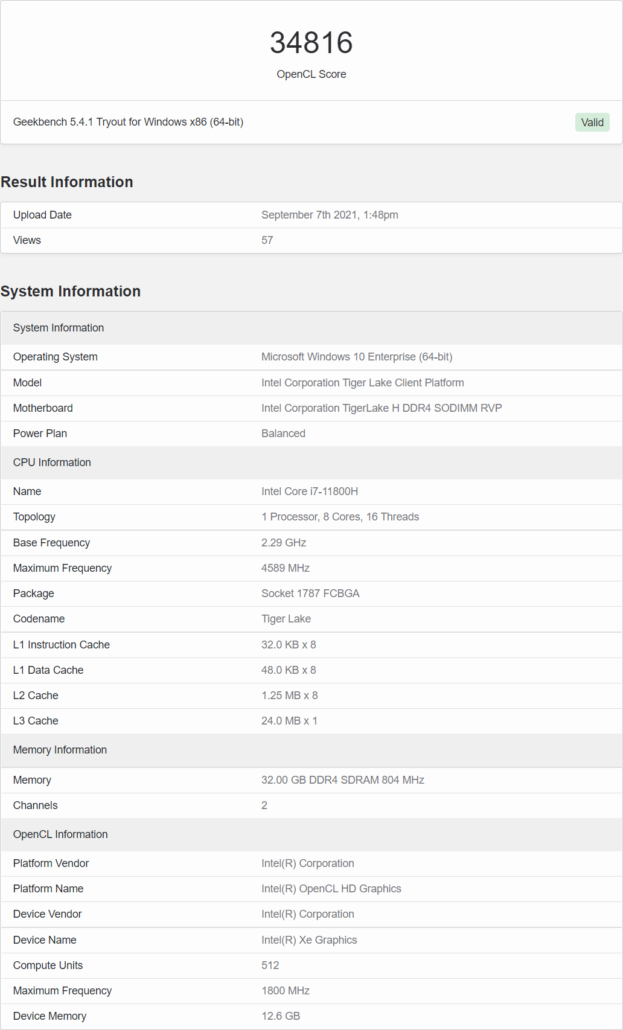 As for the performance of this specific variant, well it’s a 4.5x increase over the last entry for the same chip which shows that the earlier benchmarks were still from early silicon with drivers that weren’t really optimized at all. Even still, the drivers are not up to par with what we will see in the final samples but you can see that the performance is definitely improving in this particular bench. At the same time, the ARC Alchemist 512 core chip is 88% faster than the 256 core SKU that leaked out earlier. This is almost linear scaling for double the cores.

The fact that Intel tested this on a Tiger Lake laptop may or may not be that significant. It might hint that Intel plans to introduce its ARC Alchemist GPUs on Tiger Lake-H laptops first but it may just be them evaluating the performance on a Tiger Lake reference motherboard whereas the final variant will be integrated on Alder Lake-H laptops. That remains to be seen but if Alder Lake laptops ship in Q2 or Q3 2022, then an intermediary Tiger Lake-H refresh with ARC Alchemist GPUs makes sense.

The performance when compared to GPUs from NVIDIA and AMD is still underwhelming at the moment. The flagship delivers performance on par with the AMD RX 500 and NVIDIA GTX 1650 series which are really old cards by now. Again, Intel’s ARC Alchemist GPU lineup is launching in about 6-8 months from now so they still got a lot of time to properly be optimized.