WhatsApp finally adds disappearing photos feature: How to enable it 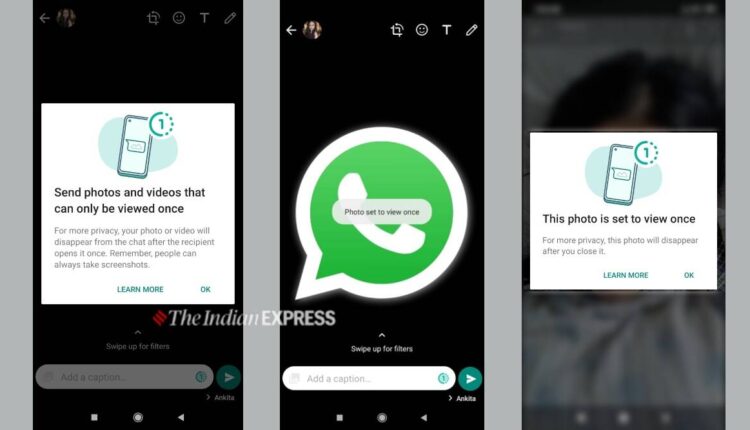 WhatsApp has finally added the disappearing photos feature to the stable version of the app. The feature is known as ‘View Once’ and is similar to how Instagram’s expiring media feature works. When you send a photo using this feature, then it will disappear once the receiver opens it and leaves the chat. But, you will have to select View Once media each time you want to send a view once photo or video. Keep reading to know more.

What you should know about the new WhatsApp feature?

WhatsApp has confirmed that any photo or video you send using the ‘View Once’ feature will not be saved to the recipient’s Photos or Gallery. Once you send a View Once photo or video, WhatsApp won’t be able to show it again.

Must Read |WhatsApp: How to read deleted messages easily

The messaging app won’t allow you to forward, save, star, or share photos or videos that were sent or received with View Once media feature. You can only see if a recipient has opened a View Once photo or video if they have read receipts turned on.

The Facebook-owned company also says that if you don’t open the photo or video within 14 days of it being sent, the media will expire from the chat. However, one will be able to restore the ‘View once media’ from backup if the message remains unread at the time of backup. If the photo or video has already been opened, the media will not be included in the backup and can’t be restored.

Why you should send media using ‘View Once’ feature to ‘trusted’ users?

WhatsApp also warns that one can even take a photo or video of the media with a camera or other device before it disappears. The company says “Encrypted media may be stored for a few weeks on WhatsApp’s servers after you’ve sent it.”

How to send View Once media on WhatsApp?

Step 1: Open WhatsApp and tap on the attachment icon.

Step 2: Then, go to Gallery and select the photo or video you want to send to your contact.

Step 3: After selecting it, you will see a clock-like icon in the ‘Add a caption’ bar, just tap on it to enable the View Once feature. Once you enable it, the app will show a message saying “Photo set to View Once.” You can then send disappearing photos to your friends and family members.