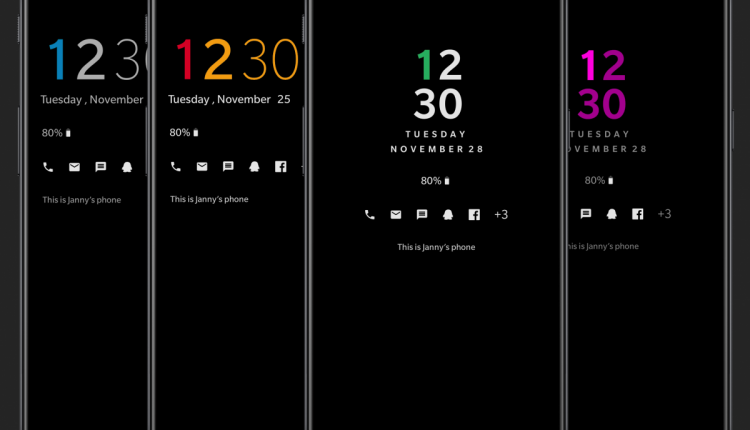 he “Always On Display” feature has been a staple of Android devices for years. It was first introduced by Samsung and took advantage of their phones’ AMOLED display. The concept behind it is pretty simple — it keeps a part of your screen constantly turned on with a clock or useful widgets, while keeping the rest dark. Hence the name “always on.”

The concept behind having your display permanently turned on would’ve sounded like madness a few years back, but AMOLED displays can turn off pixels completely and individually, so the impact on the battery is minimized. Further improvements on both AMOLED displays and smartphone software have also helped minimize screen retention and overall wear and tear while using it.

Most phones already come with this feature built-in nowadays, while some that don’t are also perfectly capable of using it. So today, we’re going to teach you how to enable Always On Display on your phone.

It should be noted that these methods will not work on phones using LCD displays. LCDs are not capable of producing true blacks as AMOLED panels do, and enabling the feature would mean that users would have the whole display turned on all the time, which is not ideal for either battery life or display longevity.

How to enable Always On Display on:
ASUS
OnePlus
OPPO/Realme
Pixel
Samsung
Xiaomi
How to enable AoD with Third-Party Apps
Why should I care about Always On Display?
While the steps are largely going to be correct, there may be some variations across different phones depending on the software and OS version that they are running.

How to enable Always On Display on ASUS phones It’s easy to enable AOD on ASUS phones running ZenUI. Shown above are the steps to enable it on the ZenFone 8 running ZenUI 8, but the steps are basically the same on older versions of ZenUI.

How to enable Always On Display on OnePlus phones

OnePlus resisted adding an always-on display feature to their phones for quite a while, but they finally caved into user demands and added the feature this year with the release of the OnePlus 9 series. It then arrived with the OnePlus 8 series as well.

How to enable Always On Display on OPPO/Realme phones

OPPO and Realme phones with AMOLED displays are compatible with this feature since it’s fully supported on ColorOS and Realme OS, and getting them working is as much of a breeze as it is on other smartphones.

How to enable Always On Display on Pixel phones

Always On Display on Pixel phones is actually a rather new feature. While Pixel phones have had an ambient display feature for a while, they didn’t really work like comparable competitors, as it would only show up while you’re actually looking at your phone.

How to enable Always On Display on Samsung phones

Samsung phones have pioneered this feature since it was first introduced with the Samsung Galaxy S7 series in 2016, and as long as you have a compatible panel, you should be able to take advantage of it and turn it on on your phone.

If you don’t want to have it turned on constantly and you’d rather turn it off sometimes, you also have a handy Quick Settings tile to turn it on and off:

How to enable Always On Display on Xiaomi phones

Xiaomi devices running MIUI 12 and featuring AMOLED panels will be able to enjoy Always On Display on their phones as well, and it’s pretty straightforward to enable.

If you’re not satisfied with the AOD themes that come pre-loaded on your phone, you can check out more on the MIUI Theme store.

What if my phone doesn’t have the feature?

There are several apps that provide similar, or better, functionality to the ones that are included with several devices. These apps can be used on any devices — even phones with LCD displays, although if you’re thinking about it, you should think twice and read the warning I wrote at the beginning of the article.

One of the best apps is “Always On AMOLED” by Tomer Rosefield. It has 10 million downloads and provides features such as auto-movement to prevent burn-in, Tasker and Greenify integration, backgrounds and wallpapers, quick note-taking, and much more. If you’d like something a little lighter than that, “AlwaysOn” by Domi0415309 is as good as it gets, and it’s even open-source. It asks for minimal permissions, comes with multiple watch faces, displays notifications, and more. The source code is also fully available in GitHub for people to read through. Of course, getting a third-party app always has downsides compared to official options. Particularly, these apps require the “draw over other apps” permission just like lock screen replacement apps do. That isn’t bad by itself, but it does mean that it’s slower, heavier, more resource-demanding, and a potential security issue compared to a feature that you turn on in the Settings app.

Why should I care about Always On Display?

This feature is pretty much just the natural evolution of the “ambient display” that was so popular on Motorola phones several years ago, a feature that eventually trickled down to stock Android as well. I’ve found it pretty useful as taking my phone out of my pocket would show me the time without needing to unlock it. Always On means that it’s just constantly on instead of turning itself on every time it detects movement.

That means when it’s laying on a table, the time will always be visible on the display, meaning that you don’t have to grab it to check the time. Whenever the proximity sensor detects the phone is in a pocket, the display will, in most implementations, be turned off to avoid accidental taps on the display and further save on battery. AMOLED displays and the advancements in both hardware and software also mean that the impact on battery between having the feature turned on or off is minimal.