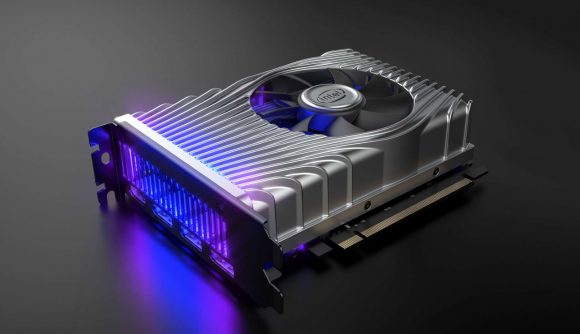 Last month, we saw Intel’s new 30W OEM-only DG1 graphics card inside a prebuilt gaming PC, suggesting that it may have more gaming credentials than we initially thought. This looks to be the case, after Youtuber ETA Prime picked up the $750 rig and put it through its paces in 3DMark and some of the best PC games.

Using 3DMark’s Night Raid, Fire Strike, and Time Spy benchmarks, the DG1 achieved graphics scores of 21,313, 5,837, and 1,630 respectively. That’s close to the performance of AMD’s Ryzen 7 5700G, which is a prebuilt exclusive APU that will finally release as a $359 standalone product in August. Those are also similar to the average 3DMark scores you’ll find on AMD’s dedicated RX 550 GPU.

The DG1 looks like it’s a great card for budget 1080p gaming, if you don’t mind turning the settings down a little. It achieves an average of 62fps on Forza Horizon 4 at low settings, while the most impressive result is in Fortnite with an average of 151fps in performance mode. Only time will tell if Intel will reverse its decision and make the DG1 available for purchase outside of prebuilt systems, like AMD did with its Zen 3 APUs.

The upcoming gaming-focused DG2 graphics card is in another league of performance, however. Leaker Tum_Apisak claims that a model with 448 execution units will have 97% of the performance seen in AMD’s RX 6700XT, and 5% less than Nvidia’s RTX 3070.

Another DG2 SKU with 512 execution units is in the works too, which could see Intel’s GPU take the lead.