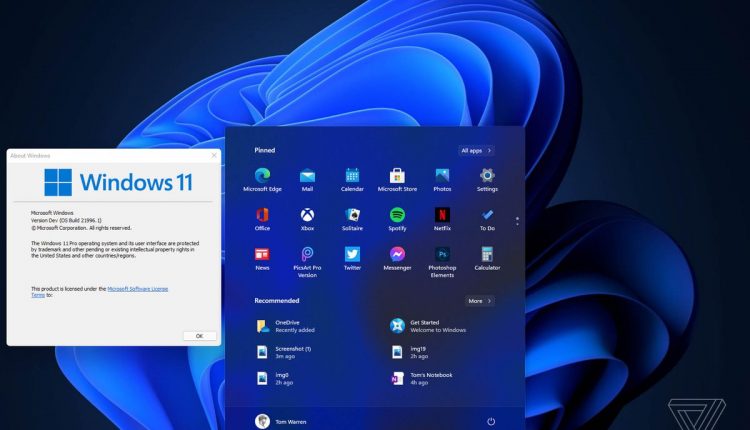 Windows 11 looks all but certain – both in name and in what’s going to be announced at Microsoft’s event on June 24.

A very early build of Windows 11 has leaked already, showcasing a refreshed look and a new name, to the surprise of many.

With ‘Sun Valley‘ still scheduled to arrive for Windows 10 as an update soon, it looks as though Microsoft are already looking further ahead, with an event scheduled for June 24.

Here’s everything we know so far about Windows 11, the successor to Windows 10.

Cut to the chase

Right now there is no confirmed release date for Windows 11.

Microsoft has announced an event on June 24 to talk about ‘the next generation of Windows’ at 11 a.m. Eastern Time, so we’re going to know for certain very soon.

Back in 2015 with the launch of Windows 10, Microsoft was adamant that there would be no Windows 11, but technology changes over the years, and there’s only so long you can stick with the number 10. Apple technically did it for ten years until macOS 11 Big Sur arrived, and that brand doesn’t have the same size of customer base clamoring for a new number.

On June 9, the company released the below video, full of start-up sounds slowed down to 4,000%. It’s telling that the length of the video is exactly 11 minutes.

With the leaked build being named 21996 and as Windows 11, it’s also labelled as near-final, so we could see a release sooner rather than later.

While the build is available for a few out there, we strongly recommend to hold off for now, as it looks to be a very early build to what we may see unveiled at the June 24 event.

It’s now rumored that the upgrade could be free for Windows 8 and Windows 7 users. Similar to how Apple offers their new macOS releases every year for free, Microsoft are now likely to be offering the same free charge for Windows 11, enticing more users to update sooner, without paying anything.

The name of Windows 11

During the opening keynote to Build 2021, Microsoft CEO Satya Nadella spoke about using a new version of Windows. “I’ve been self hosting it over the past several months, and I’m incredibly excited about the next generation of Windows,” Nadella told attendees.

A spin-off called Windows 10x was in the works for tablet devices and low-end laptops, until it was suddenly scrapped earlier this year.

One telling attribute is seeing that support for Windows 10 is ending in 2025, merely three years from now.

This has seemingly been confirmed, with Windows 11 leaking a week before the June 24 event, and being named within the near-final build.

This only confirms that Windows 11 is coming sooner rather than later.

Windows Central reports that the internal timeline for the Windows 10 21H2 release points to October, with testing through the Windows Insider channels before then.

The company has now set the end date for updates and support of Windows 10 for 2025. Although it should be noted that in the past, Microsoft has delayed the killing off of previous Windows releases before, Windows 7 being a great example here. So we could still see Windows 10 live on beyond its 2025 end date while Windows 11 is going strong.

While ‘Sun Valley‘ is still rumored to have a refined look for Windows 10, it’s not a long shot to imagine some of these features being moved onto Windows 11 instead, which the recent leak now confirms.

A new look for Windows 11

In the latest Insider dev channels, there are already countless icons that have seen a redesign, giving most of these the most dramatic changes in looks since Windows 7.

It’s been long rumored that the UI is currently being redesigned, with a new font, Segoe UI Variable, already enabled in dev versions as early as build 21376. However, Microsoft’s design team is also looking for a new font, asking users to pick from five fonts to replace Calibri.

There’s been a recent job posting spotted, that gives even more weight to a redesign coming. It described the role as “building new parts and modernizing existing parts of the Windows UX, conducting user research to understand users’ needs.”

While this could also mean a subtle refresh of Windows 10, it could mean a huge redesign for Windows 11, if it is confirmed at the June 24 event.

With the recent build of 21996 confirming the Windows 11 name, we can also see a refresh UI, with the start button and the icons on the taskbar moving to the middle, being reminiscent of the dock from macOS.

It’s not just the fonts and the icons that are seeing a refresh for Windows 11, it even goes to the corners across the whole of the operating system, which looks to set it apart even further from Windows 10.

Alongside the new look, there’s also the implementation of rounded corners coming up. This will remove the sharp edges across the whole of the user interface and bring a softer appearance to Windows 11.

The start menu is now apparently at the center of the taskbar, but there is a way to bring the classic menu back to the left thanks to a discovery.

From app windows to the Start Menu, to buttons, Live Tiles, and even the Action Center. This one feature could have a dramatic effect on how Windows 11 looks, and help make it stand out to users if they are upgrading from Windows 10.

It looks as though there’s another feature being lifted from both Android and iOS smartphones, in the form of ‘Wake to Touch’. By just tapping on a screen, it can wake up the tablet from standby, and have it ready to be used once again.

A big update to Windows 11 won’t just be to the look of the operating system, but in the useful features that it can bring to many situations.

It’s been reported that Microsoft will be including battery usage statistics to the Settings app. Smartphones have had this sort of feature for many years, but it’s been conspicuously absent in Windows.

Other rumored features that could be moved over from ‘Sun Valley’ to Windows 11 could include the ability to uninstall most of the pre-installed Microsoft apps, improvements to snap assist for external displays, and a dashboard for your Microsoft Account that lives in the taskbar.

Additionally, recent test builds have suggested that the taskbar and the File Explorer process usually seen in Task Manager looks to be separated at long last.

There’s even a refined feature to better arrange windows on a single screen. By hovering over the ‘maximise’ button, a pop-up will appear, giving you the option of re-arranging your open applications and having them all display at once in a tidy fashion.

Alongside this, thanks to the leaked build, right clicking on the taskbar for Task Manager is now absent, alongside the keyboard shortcut of Win + X to switch to PowerShell is also gone.

Tablet mode has been one of Windows’ weaker points ever since Windows 8.

However the most important feature currently rumored is a new ‘gesture layer’ that would sit above the user interface and allow trackpad-like gestures on a touchscreen.

Pen and voice inputs are both expected to receive further refinement as well, with a new UI for voice and context menu for pen both planned.

These tablet features could be a showcase for Windows 11, especially with future Surface products in the pipeline from Microsoft. To have a new, numbered operating system for its upcoming tablets could be a big selling point for new users in due time.