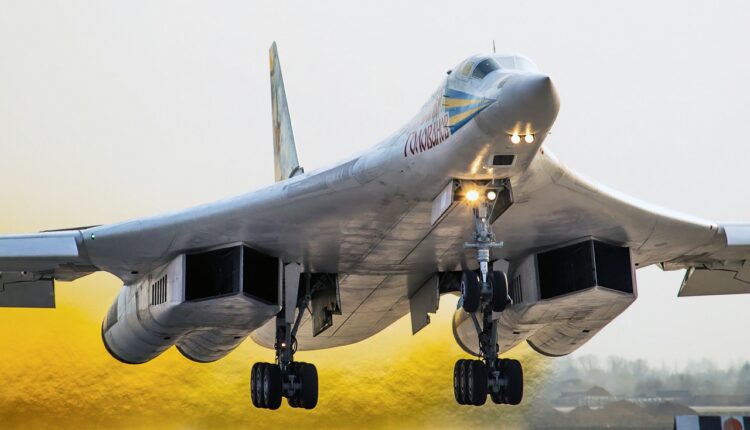 Russia‘s Tu-160 is an old-school Cold Warrior. The bomber can fly faster than most fighter jets and drop a lot of bombs on target. But how long can this plane stay in service, considering her age? The Tu-160 Soviet-era bomber is still menacing Ukraine. This Russian titan even fired missiles at Kyiv recently. The Tu-160 was designed for a nuclear war with the United States, now it serves as a missile truck that stays outside of Ukrainian air space to launch its stand-off munitions. It’s the largest and fastest bomber in service. Even though the Russian air force could be running out of precision-guided missiles, Moscow is still dependent on the strategic bomber.

Known in Russia as the White Swan (for its white finish) and by its NATO moniker – the Blackjack, the Tu-160 is still playing a major role over the skies above Ukraine. In late June Tu-160s, along with Tu-195s, reportedly launched Kh-101 cruise missiles from the Caspian Sea at Kyiv. This was a brazen attack that surprised locals who had been attempting to return to life as normal after Russia abandoned its ground operation against Kyiv.

Nuclear Weapons Delivery: Yes We Can

A scary feature of the Kh-101 is that the cruise missiles are nuclear-capable and were likely sent to Ukraine to show the defenders that Russia can still reach out and touch the capital with dangerous munitions from thousands of miles away. The attack created four explosions and two missiles killed one resident in an apartment building while injuring five others, including a child.

The Tu-160 dates back to the early 1970s when the Soviets wanted an airplane that could give them a qualitative edge and improve its nuclear triad. After about a ten-year development period, the Blackjack first flew in 1981 and was delivered to the air force in 1987. Only about 17 Blackjacks are still flying currently after the program was halted in 1994. The Russian bomber can launch up to a dozen nuclear missiles. The airplane is comparable to the American B-1B Lancer bomber. Blackjacks are based out of southwestern Russia in Saratov Oblast.

Fast With a Large Payload

This warbird has variable sweep wings to reduce drag and a narrow fuselage. Four powerful NK-32-02 engines enable top speeds of MACH 2 – remarkable for such a large airplane. It can launch other nuclear-capable air-launched missiles such as the Kh-55MS.

Updates Keep the Pressure on Enemies

An updated Tu-160M maintains the Blackjack’s status as one of the best bombers in the world. The Tu-160M has better radar, an improved bomb sighting system, and a new electronic warfare jamming capability.

Missile Truck Stays Out of Range of SAMs

The Tu-160M flew missions over Syria to attack ISIS and rebel positions, although it wasn’t challenged by air defenses in that theater. Since Russia has such a small Blackjack fleet, it usually stays out of range of Ukrainian surface-to-air missiles even though it can fly fast on afterburner to avoid SAMs.

The Tu-160 is a fearsome airplane that will continue to threaten Ukraine and is only limited by the number of missiles in Russia’s arsenal. It’s a feat of Russian engineering from the Cold War that is still flying today. The specs are impressive, and Russia likely wishes it had more in the fleet. The role of missile truck is apt for the Blackjack and more attacks on Kyiv could be in store for the Ukrainians. There’s not much President Volodymyr Zelenskyy’s forces can do to stop it.