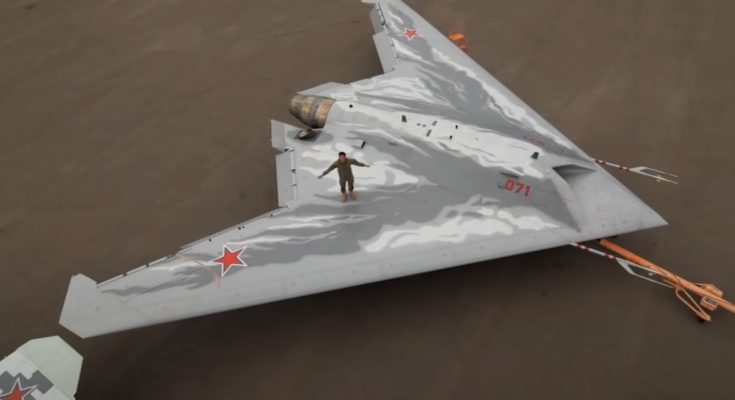 Russia’s S-70 stealth drone seems like a powerful new weapon of war for Moscow. But, just like all new weapons platforms coming out of Russia these days, there is a lot of tough talk and amazing HD pictures and video, but very little production of such weapons. How should the U.S. military consider such a new drone? Should they be worried or not? Vladimir Putin is likely becoming impatient as one of his marquee military hardware programs is suffering growing pains. The S-70 “Okhotnik” (Hunter) stealth unmanned combat aerial vehicle will not enter serial production until 2023 keeping it from flying over the Ukrainian battlefields until the following year if the war rages that long. In June, the unmanned craft completed a milestone that seemed to point toward an on-time delivery when it conducted a successful air-to-ground missile test. Manufacturer Rostec gave the latest news to Putin last month.

Rostec CEO Sergey Chemezov said about the Okhotnik “The first flying prototype was rolled out in 2021 and we will begin serial-producing and delivering it to the [Russian] defense ministry in 2023.” This means the aircraft will not go to the air force until 2024 at the earliest.

The Okhotnik is expected to fly as the semi-autonomous “loyal wingman” with the Su-57 stealth fighter. The S-70 will conduct deep strike and recon missions in a configuration that will allow the Russian air force to have a force multiplier with radar-evading aerial combat teams. Up to four Okhotniks could fly with the Su-57.

The Level of Stealthiness Is a Moving Target

The drone’s flying wing design with internal weapons bays should add to its radar-evading capability. In 2019, the Okhotnik took its maiden test flight for 20 minutes at around 2,000 feet altitude. This mission was supposed to be held earlier that year, but it suffered a delay. Early photos of the Okhotnik revealed an outward engine exhaust and “exposed fasteners and seams” that will lower the level of overall stealthiness. However, in 2021 the Okhotnik was photographed with a flat jet nozzle that would increase the amount of radar evasion.

The Okhotnik is a large aircraft weighing 20 tons at 46 feet in length. Its wingspan is 62 feet. These dimensions make it minimally smaller than the Su-57. The drone may also have the same engine as the Su-57. The unmanned craft is believed to be outfitted with the AL-41F turbofan powerplant. This would give it a range of 2,500 miles and a maximum speed of 621 miles per hour. The weapons payload could be up to 4,400 pounds.

Can the S-70 Okhotnik Learn New Tricks During Flight?

The unmanned vehicle may have elements of artificial intelligence in which the machine could learn from aspects of its flight.

“From our point of view, artificial intelligence is the ability of a machine to make decisions in a rapidly changing environment without operator intervention,” said Nikolai Dolzhenkov, chief designer of Kronstadt JSC, one of the suppliers for the Okhotnik. “The second absolutely necessary trait is the ability to self-learn using one’s own machine experience. That is, the program should be one that allows you to constantly improve your skills and abilities, namely software ones.”

Can Russia Deliver on These Bold Objectives?

The S-70 Okhotnik is an ambitious program, and the 2024 delivery goal sounds optimistic with the necessity of integrating autonomous flight and machine learning with the drone. If the drone can indeed fly with the Su-57 as a loyal wingman, it will extend the long-range strike capability of the Su-57. The drone could also send recon and targeting data back to the manned airplane for more accurate standoff missile strikes. The level of radar evasion capability will be paramount in the loyal wingman concept, so improvements with the addition of the flat jet nozzle is an important innovation for the drone. With artificial intelligence added into the mix, there could be more delays as the Russian defense industry is not known for coming on time and under budget for its aircraft development.