Hong Kong (CNN Business)Xiaomi stumbled in the third quarter as it grappled with fallout from the global chip shortage and fiercer competition.

The Chinese company, which only recently became the world’s second-biggest smartphone maker, fell back to third place behind Apple (AAPL) in the three months ended September, according to Counterpoint Research and Canalys.
Posting earnings on Tuesday, Xiaomi said that its smartphone business had been severely affected by the ongoing shortage of semiconductors, which it expects to continue through the first half of next year.
“This year, there is a very special background, and that is there is a shortage of components globally,” Wang Xiang, Xiaomi’s president, said on an earnings call. “The shortage is a big challenge to us.”
The company logged 43.9 million global smartphone shipments in the third quarter of 2021, down about 6% compared with the same period last year.
Xiaomi has called smartphones “the cornerstone” of its business, which includes other connected devices such as home appliances. Lately, the company has also announced a push into electric cars, with plans to mass produce its first vehicle in the first half of 2024.
Enter your email to receive CNN’s nightcap newsletter.
close dialog
It excited investors this summer after leapfrogging Apple to become the world’s second best-selling manufacturer. The Beijing-based company’s shipments had soared in the three months ended June, trailing only those of Samsung (SSNLF).

Since then, however, Xiaomi has been hit hard by supply chain woes.
Tarun Pathak, a research director at Counterpoint, said that while component shortages had affected virtually every vendor, Xiaomi had to contend with bigger headaches due to its extensive lineup.
In the most recent quarter, the company offered more than 50 different smartphone models, compared to about 14 that Apple had on the market, he estimated.
That adds complexity and “becomes challenging,” said Pathak. “Because you have to deal with a range of components.”
A relative lack of exposure to the problem helped Apple, in part, reclaim the second spot in the race in the third quarter, he added.
The US giant also benefited from strong iPhone 13 sales, according to Canalys Research. In a recent report, the firm estimated that Apple had nabbed 15% of global shipments, just one percent more than Xiaomi.
But don’t count Xiaomi out, according to Pathak.
He said the firm could well reclaim its runner-up position, particularly as it usually performs strongly in the first half of the year, with upcoming events such as Chinese New Year. 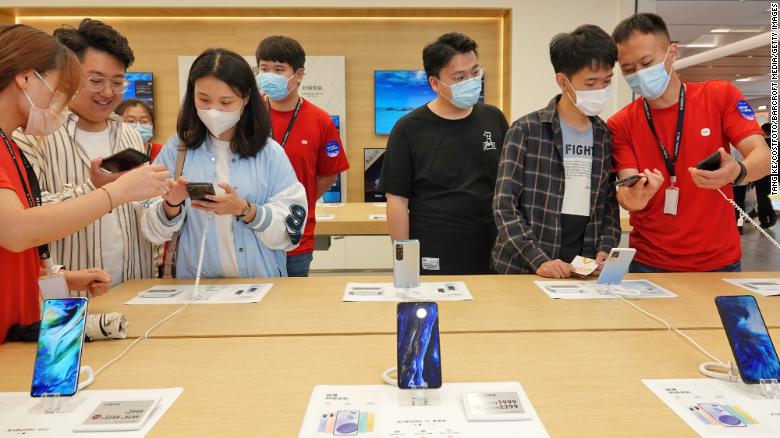 Customers buying phones at a Xiaomi store in Yantai, Shandong province, China, in September.
Xiaomi’s ultimate goal — of eventually getting to number one — isn’t out of the question either, according to Pathak.
He said the company would need to retain its lead in two of its most important markets, China and India, while working to carve out a greater presence in places such as the United States.
“If they [become] number one, it can’t be just because of these two countries,” Pathak said. “The US has the number three [smartphone] market in the world, which is largely missing from Xiaomi’s portfolio.”
Xiaomi posted overall revenue of 78.1 billion yuan ($12.2 billion) in the third quarter. That represented an 8% increase compared to the same time last year, but was slightly less than analysts were expecting.
Net profit climbed 25% to nearly 5.2 billion yuan ($814 million) during that period, slightly higher than analyst projections.
Source: https://edition.cnn.com
AppleXiaomi
78
Share

How to view saved Wi-Fi passwords in Windows 11