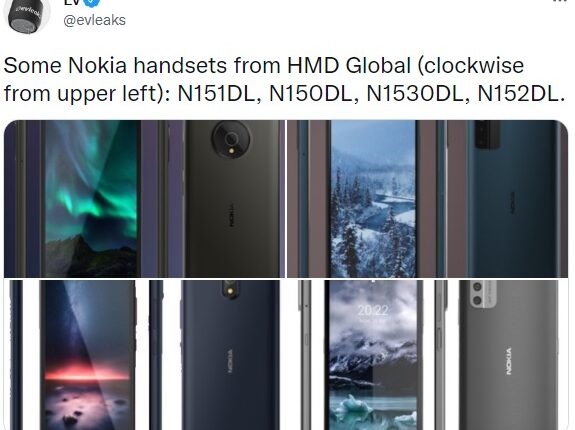 Evleaks the all-mighty leaked what seems to be the official renders of yet to be announced four new Nokia smartphones. The phones are hiding behind the model names of N151DL, N150DL, N1530DL and N152DL, which are not following the usually assigned TA-number scheme. But, the devices don’t look like the standard Nokia devices we are used to seeing. Well, at least not the N150DL and N152DL. If you ask me, these models seem to be designed on the order of some carrier, probably the US one since Evleaks got the promo materials and shared them.

Nokia N151DL looks like an affordable entry phone with a simple design, teardrop notch for the selfie cam, 3.5 mm audio jack, round camera module at the back and probably a removable back cover.

Nokia N150DL is a change in design, at least at the back of the device. The body is most likely aluminium with a plastic back cover. The camera module is moved from the centre to the upper right corner like in the latest Motorola G series phones. The camera module holds main, and two more cameras, probably an ultra-wide lens and a depth sensor. The LED flash is next to the main camera on the other half of the module. The body lines are surprisingly clean, just having the basic buttons, side fingerprint reader, ports and it seems that the Google Assistant button is gone. The 3.5 mm headphone jack and one microphone are on top of the device, and on the bottom are USB-C charging port, another microphone and a loudspeaker. The front of the device is housing a chin with a Nokia logo and a teardrop selfie cam notch with an earpiece above it.

Nokia N152DL seems to be the best out of the four devices leaked by Evleaks. The body is probably made of aluminium with a glass back cover. The power button seems a bit strange, but it could be combined with a fingerprint reader. This model is, unfortunately, coming with the Google Assistant button which is going to be the first thing you’ll disable in the settings.
The front of the device is bringing a teardrop notch for a selfie camera and a chin bezel that holds the Nokia logo. The camera module is designed like in N150DL, but modules seem to be having better sensors for the main, depth and ultra-wide cameras (just guessing the composition). The main camera could be a 48 MP but I can’t see clearly the text written on the module.

These phones are a shift in the standard profound Nokia design, and I do hope those are for a carrier, but there is a chance we are seeing a new design approach, at least for the camera module. Nokia Mobile is working on something lately since their EUIPO page got four new design protection applications, so whatever it is, we are going to be seeing it soon.