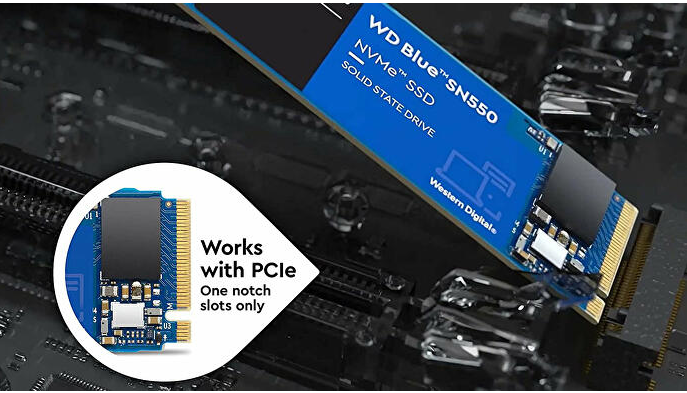 Share
If you’ve been looking to give your PC or laptop a quick boost of speed and capacity, then this is the deal for you. The WD Blue SN550 NVMe SSD is now at one of its lowest price points on Amazon, going for just £69.97 for the 1TB model.

An SSD is one of the best upgrades that you can do to your computer. A fast storage device can improve performance across the board, from speeding up your boot times to improving application launch performance and also improving loading times in games.

The WD Blue SN550 is an M.2 NVMe SSD. Unlike traditional 2.5-inch SSDs that rely on your motherboard’s SATA interface, M.2 drives plug directly into the PCIe bus of your motherboard, providing faster transfer speeds.

How much faster? Consider a traditional 2.5-inch SSD, which has a transfer speed that maxes out at around 550MB/s. The SN550, on the other hand, has sequential read speeds of around 2400MB/s and write speeds of 1950MB/s, which is roughly four times faster.

Compared to traditional SATA drives, M.2 drives require no wiring and no additional power as they can do both through the M.2 socket on the motherboard. This makes installation much easier, as it usually just requires one screw to secure it in place. As for compatibility, if you have a computer from the last two years or so then it’s highly likely it already has a M.2 socket somewhere on it.

One thing to keep in mind is that not all M.2 drives are the same. If you are hunting for a deal, make sure to avoid any M.2 drives that still utilize the SATA interface. They will look like other M.2 NVMe drives but offer the same speeds as 2.5-inch SATA SSD and are usually not that much cheaper to take that performance hit.

If you are looking for an SSD for your PlayStation 5, then check out this ADATA XPG S70 Blade instead, which has the minimum specs required to meet Sony’s guidelines. It also works well in PCs with PCIe 4.0 compatibility, providing even faster speeds than the PCIe 3.0 drive we highlighted in this article.

If you want to check out more Black Friday deals, follow us @dealsfoundry and also get instant notifications delivered any time a new deal becomes available.

Digital Foundry specialises in technical analysis of gaming hardware and software, using state-of-the-art capture systems and bespoke software to show you how well games and hardware run, visualising precisely what they’re capable of. In order to show you what 4K gaming actually looks like we needed to build our own platform to supply high quality 4K video for offline viewing. So we did.

Our videos are multi-gigabyte files and we’ve chosen a high quality provider to ensure fast downloads. However, that bandwidth isn’t free and so we charge a small monthly subscription fee of €5. We think it’s a small price to pay for unlimited access to top-tier quality encodes of our content. Thank you.