The 990 Pro series launches this October 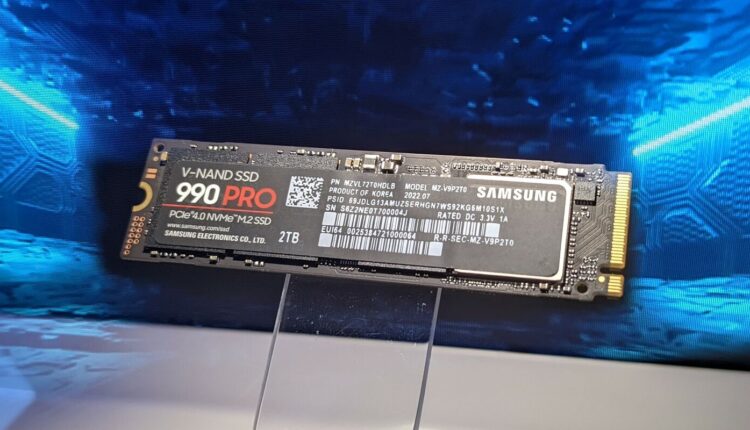 Samsung unveiled its new flagship SSD (solid-state drive) line, the 990 PRO Series, which is said to be built for a wide range of applications like gaming and 4K video editing.

There’s a fair amount of hype for the 990 because there were hints this new SSD would run on the PCIe 5.0 interface. Unfortunately, people will have to wait longer for a consumer-level PCIe 5.0 SSD from Samsung as the 990 PRO Series(opens in new tab) still runs on the old PCIe 4.0 interface, just like the 980. To offer a simplified explanation(opens in new tab), PCIe (Peripheral Component Interconnect Express) is an expansion bus that’s used to transfer data from an SSD to graphics or video capture cards. PCIe 4.0 can transfer data at an average speed of 16GT/s (giga transfers per second) while the 5.0 interface does it at 32 GT/s.

Either way, the 990 PRO Series still has impressive speeds. Samsung claims the 990 offers a “55 percent improvement in random performance over the [old] 980 PRO.” According to the company, the 990 has read and write speeds of up to 7,540 MBs (megabytes per second) and 6,900 MB/s, respectively. Read speed refers to how fast the 990 can access stored files. Faster speeds mean faster launch times for apps. And write speed refers to how fast the SSD can save files. This is particularly useful for editors who have to save or copy big 4K video files. Without these fast speeds, the process could be agonizingly slow.

Samsung claims it was able to push the performance of PCIe 4.0 thanks to a combination of the company’s V-NAND memory tech(opens in new tab) and a new proprietary controller inside the 990.

If that wasn’t enough, the new devices are powered by the NVMe(opens in new tab) (non-volatile memory express) protocol for even faster loading times. Samsung gives the example of testing the 990 SSD with the upcoming game Forspoken and found the map load times were about a second. When tested on hard disk drives, the load times went up substantially to around 30 seconds.

Dealing with the heat

With so much going on, an SSD like this can get pretty hot, so Samsung designed the 990 to be 50 percent more energy efficient when compared to the 980 PRO. The SSD also has the company’s Dynamic Thermal Guard tech to ensure an optimal temperature, and a heat spreader label to keep things cool.

The base 990 and Heatsink models will launch this October and come in two different storage capacities. The 1TB model will cost $179 while the 2TB has a $309 price tag. There are plans for a third 4TB model, but it won’t arrive until 2023. A price tag hasn’t been revealed for the third SSD.

The announcement seems to imply the price points are the same for both the base and Heatsink models. We reached out to Samsung to get clarification on this front because the wording was a little confusing. This story will be updated if we hear back.

We also asked if and when the company will launch a 990 PRO Series model with the PCIe 5.0 interface. Corsair has recently teased its new PCIe 5.0 SSD, which is slated to offer a massive read speed of 10,000 MB/s. Hopefully, Samsung will reveal a PCIe 5.0 model soon.