Xiaomi Pad 5 review: An iPad Air for the Android masses 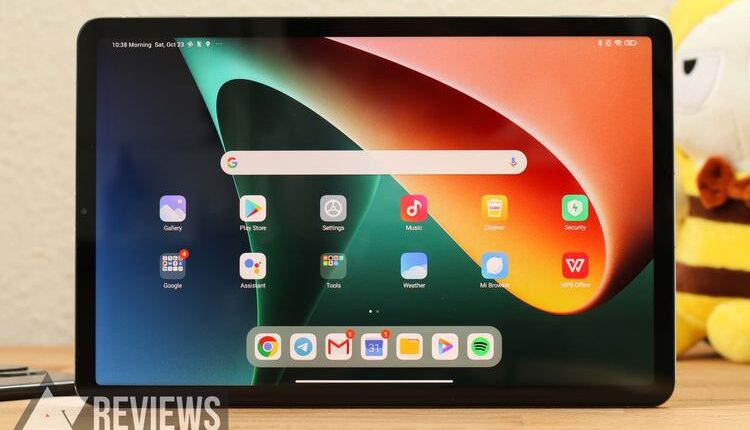 For a long time, it looked like most Android manufacturers other than Samsung had all but given up on the tablet form factor, but that’s changing. Following in the footsteps of competitors like Lenovo, Xiaomi has just released the all-new Pad 5, which is a significant departure from its aging, much smaller 8-inch predecessor.

Apart from bringing a sleek design to the table, the Xiaomi Pad 5 wants to woo potential buyers with its value proposition and versatility. Xiaomi claims it’s the perfect device for work and play, thanks to the 120Hz screen, quad speakers, great processor, and pen/keyboard support in one affordable package. And for the most part, Xiaomi delivers.

The Xiaomi Pad 5 is a versatile Android tablet that manages to compete with the iPad Air.

Design, hardware, what’s in the box

The Xiaomi Pad 5 looks like an iPad Pro and a recent Xiaomi phone had a child. While the front pretty much screams iPad due to its rounded display and narrow bezel (other than the 16:10 aspect ratio), the back looks much more in line with Xiaomi’s phone design. The singular 13MP back camera sits in a bump that looks like it’s cut straight out of a Xiaomi phone, complete with an unused space for a second camera that reminds me of those cars with fake exhaust tips. On the bright side, the white version of the tablet gives you a beautiful prism effect depending on your viewing angle. The boxy edges are another design element it shares with the iPad Air/Pro, complete with a magnetic charging stylus holder on one side and three pins for an optional keyboard accessory on the other. All in all, the tablet is pleasant to look at, and it doesn’t feel too heavy.

Coming back to the screen, Xiaomi didn’t shy away from adding a few high-end features to this €400 device. The 2560×1600 LCD reaches a refresh rate of up to 120Hz, though you can select 60Hz in settings if you prefer to save some battery life. While the screen does get plenty bright when you need it to, automatic brightness often is a tad too conservative. Xiaomi has also included an optional adaptive color mode that’s surprisingly unobtrusive once activated, similar to what iPads, MacBooks, and Nest smart displays do. The panel does not use OLED technology, but it still provides good enough black levels and color accuracy.

Xiaomi positions the tablet both for work and play, and its four-speaker setup makes it clear it’s not slacking in the latter department. They’re placed on the shorter sides of the tablet, perfect for video consumption. Sound is crisp and loud but, of course, neither fidelity nor bass are comparable to proper speakers. Watching films and shows is definitely more enjoyable than listening to music.

The optional €100 Smart Pen imitates a real pencil as closely as it can, though it’s made of plastic and comes with a soft-touch tip (plus a replacement tip). Its two hardware buttons could be just a tad easier to press, too. In the hand, it’s well balanced and makes for a writing/doodling experience on-par with other touchscreen styluses. You’ll never see the same kind of app support as the Apple Pencil, though. To charge or store the pencil, you can magnetically snap it to the right side of the tablet. If you’re a leftie and feeling adventurous, you can even snap it to the other side. It doesn’t charge there, but thanks to the magnetic pins in place for Xiaomi’s optional external keyboard (which we don’t have to test), it’s still a passable storage solution.

The 8MP front camera is fine for video calls, though I’d prefer if Xiaomi put it in the middle of the long side instead of the short side for better landscape video calling. The 13MP rear camera serves well as a document scanner or as a whiteboard shooter, but don’t expect perfect results ready to be used in Instagram out of it.

Xiaomi tweaked MIUI 12.5 (based on Android 11) to better fit the big display. When you first view the home screen, you’ll be reminded of the iPad once again. There’s a floating bar full of your favorite apps at the bottom and an app drawer-free launcher that, by default, collects all installed apps. The floating favorites bar doesn’t show up in the Recents overview, though. Having it here would make it possible to tap and hold icons to start split-screen and multi-window experiences effortlessly — instead, you have to open apps individually first and then select them from the Recents screen to start using them in split-screen, which is tedious. Some of Xiaomi’s software tweaks, like the option to drag down notifications to open the corresponding app in a floating window, make a lot more sense. This mixed experience makes me feel like Xiaomi stopped just short of providing real improvements to the Android tablet user experience.

Another problem is Android’s lack of optimized tablet applications. For example, Xiaomi uses Gboard as its software keyboard out of the box, but I wish it would work better when using the tablet in landscape mode. The keyboard buttons are stretched out if you don’t select the extra-tall keyboard height in settings, making it hard to hit the right letters. There’s also no split-keyboard option to help you out. That problem gets even worse when you select a smaller interface density option, which I personally prefer. And then there’s the issue that way too many apps just have stretched out phone UIs on tablets. This isn’t Xiaomi’s fault, but it deserves mentioning if you’re in the market for a tablet.

Despite these small quibbles, the Pad 5 absolutely flies in everyday usage. Switching between apps, browsing the web, gaming, streaming, and anything else I throw at it feels buttery smooth thanks to the high-end Snapdragon 860 SoC. The only thing I worry about in the long term is the stingy 6GB of RAM. I haven’t run into any problems, but with software evolving and needing more resources, things might be different two or three years down the road. At least you get a minimum of 128GB of storage.

To get back to the Smart Pen, it perfectly complements the tablet experience and turns it into a proper work machine, at least for me. While gimmicky features like shortcuts for screenshots and notetaking are a given for almost any advanced stylus, the Smart Pen also excels when it comes to annotating documents and jotting down thoughts, making for a natural experience with on-board tools like Xiaomi’s Notes app and the pre-installed WPS Office suite. I just wish it didn’t have such high input delay. When writing quickly, I can see the ink trailing behind the tip of the pen.

The 8,720mAh battery is plenty for my usage that consists of streaming, reading, and occasional gaming sessions. Since this isn’t a device that I have on me all day like a phone, I managed to eke out multi-day battery life routinely. Depending on your usage, you could end up with fewer hours, but with Xiaomi saying that the battery will give you more than 10+ hours of gaming and more than 16 hours of video playback, you’re going to have to try very hard to run it down in less than a day.

Should you buy it?

Yes. While I think it’s a bummer that you have to purchase the Smart Pen separately, this also means that you get a significantly lower starting price of €400. That makes it a much better value than its nearest competitor, the Samsung Galaxy Tab S7 Fan Edition. And if you don’t want the pen, this will only be beneficial to you. After all, the 120Hz screen, the blazing-fast processor, and the quad speaker setup make a great case for themselves.

You’ll be hard-pressed to find a similarly equipped Android tablet at this price — if you’re really adamant about getting an Android tablet with a USB-C port, that is. The regular iPad and its first-gen Apple Pencil are available for less than €500 / $500, too.

How to Use Fuel-Efficient Routes in Google Maps