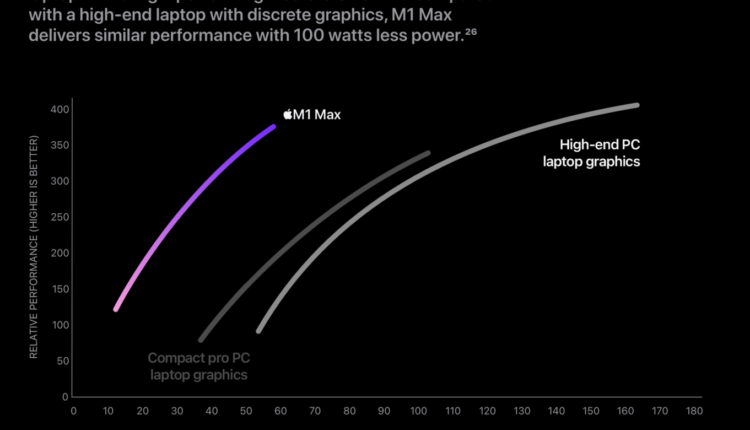 Apple’s big claims about the performance capabilities of the M1 Pro and M1 Max seem to be legitimate as more benchmarks surface. This time, a Redditor found GFXBench scores for the M1 Max that place it at around 25% faster than the mobile Nvidia RTX 3070. This puts it in line with Apple’s charts from its presentation.

Reddit user senttoschool posted the first M1 Max GFXBench scores in the r/Hardware subreddit. Obviously, it would be wise to be skeptical of these results for a couple of reasons. First, the submission on GFXBench was made utilizing Apple’s Metal API, compared to the Nvidia and AMD results using OpenGL on Windows.

That said, comparing M1 Max results to the RTX 3080 Mobile and Radeon RX 6800M (the same GPUs that Apple used in its presentation) sees the Apple Silicon either beating or coming within striking distance of the other two GPUs when looking at the offscreen results.

Cool Down Your Phone With This Fan

Comparing the Aztec Ruins Normal Tier Offscreen results to other GPUs is pretty mind-blowing. The M1 Max appears more powerful than several desktop graphics cards, including the RTX 2080 Super, Radeon RX 6800 XT, and even the Nvidia Titan V. The M1 Max doesn’t win on every benchmark such as the Car Chase and the Aztec Ruins High Tier, but the fact that it’s even keeping up at all with desktop components is a game changer.

These aren’t the only benchmarks that bear out the performance of the M1 Max. Just a few days ago, we reported on early Geekbench scores for the M1 Max. In that benchmark, the M1 Max scored a 1,749 in the single-core test and 11,542 on the multi-core. Compared to Apple’s own M1 silicon in the MacBook Pro 13-inch, the M1 Max is almost 60% faster in multi-core performance.

It must be stated that raw power alone isn’t the only feat here. These performance gains are in spite of the M1 Pro and Max consuming 70% less power compared to Intel’s offerings. Remember, the maximum wattage available for charging the new MacBook Pro 16-inch is 140 watts. The desktop RTX 2080 Super alone has a 250W TGP.

As stated before, it’s important to look at these numbers with healthy skepticism. Using Apple’s Metal API gives an advantage as it’s tailored specifically for Apple hardware, whereas OpenGL is more generalized for hardware compatibility.

However, this also means that apps that are specifically made for Apple Silicon could see much greater performance benefits. Apple has not only put Intel on notice, but also AMD and Nvidia, and it will be interesting to see how the companies combat Apple’s massive vertical integration advantage.