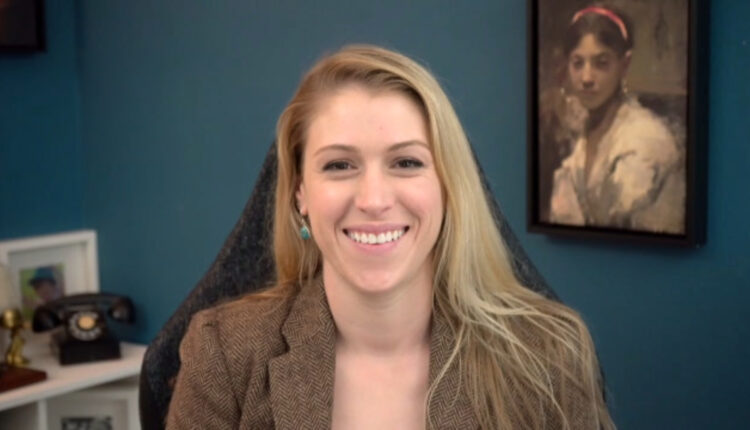 Imagine if we still communicated the way people did in the 1960s? The inefficiency of mailing letters and waiting for a reply or repeat calling a landline until someone is home to answer would drive a 21st-century citizen insane.

So why does the software (systems) development lifecycle still rely on a model created before the advent of color television?

“The SDLC is a remnant, an artifact of a previous era,” said Emily Freeman (pictured), author of ‘DevOps for Dummies’ and head of DevOps product marketing at Amazon Web Services Inc. “A linear, single-threaded model designed for the manufacture of material goods cannot possibly capture the distributed complexity of modern socio-technical systems.”

In her keynote presentation during the recent AWS Startup Showcase: New Breakthroughs in DevOps, Analytics, and Cloud Management Tools event, Freeman called for a “revolution in DevOps” and presented a new model for the SDLC.

“My mission with this is to challenge the status quo, to create a model that I think more accurately reflects the complexity of modern cloud native software development,” Freeman stated.

Speaking with John Furrier, host of theCUBE, SiliconANGLE Media’s livestreaming studio, prior to her keynote address, Freeman talked about the history of the software development lifecycle and why the DevOps process, created back in the late 2000s, needs to change. (* Disclosure below.)

Just what is DevOps, anyway?

DevOps was created in a different ecosystem than the world we are living in now, according to Freeman. In 2009, serverless and containers didn’t exist, applications were monolithic, and cloud computing was in its infancy. As technology advanced and cloud computing entered the enterprise, DevOps became a catch-all phrase that described different things to different people.

Some say DevOps requires continuous integration and continuous delivery of software updates, while others will count deploying code more frequently with occasional testing. And even many companies place organizational changes, such as adding platform teams or separating concerns within the engineering structure, under the DevOps banner.

“There isn’t a universally accepted standard of what DevOps is or what it looks like in execution. It’s a philosophy more than anything else; a framework people can utilize to configure and customize their specific circumstances to modern development practices,” Freeman stated.

One definition everyone agrees on is that DevOps “attempted to capture the challenges of the entire software development process,” Freeman said. It is this holistic definition that she aims to revitalize as she sets out to define a DevOps model for the cloud native future.

DevOps must embrace the chaotic nature of modern software development

“It’s a study in entropy, and it is not getting any more simple,” Freeman said.

A new software model needs to “capture the multi-threaded non-sequential nature of our work. It should embody the roles engineers take on and the considerations they make along the way. It should build on the foundations of agile and DevOps and represent the iterative nature of continuous innovation,” she added.

Building on this idea, Freeman has created her revolutionary model. In a play on the word “revolution,” Freeman’s concept is both groundbreaking and visually invokes a revolving sphere. The model is composed of five concentric circles separated by lines that resemble spokes on a wheel. Together, they symbolize the dynamic, fluid and non-linear process of software development as practiced today. 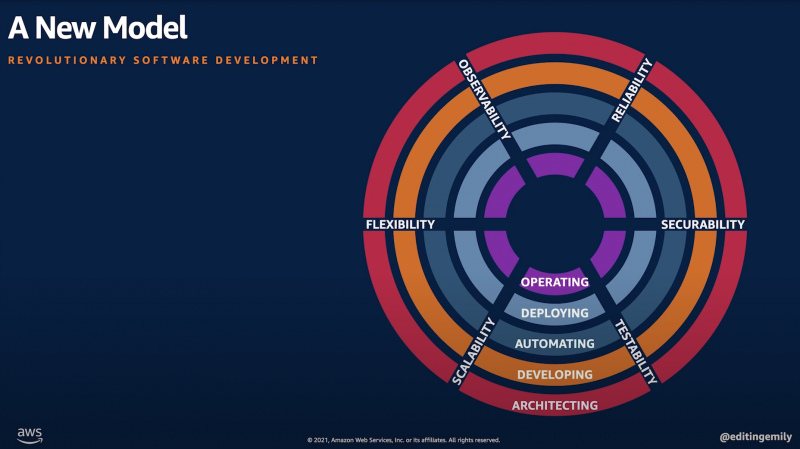 The five circles represent the critical roles of software development and move inward from architecting on the outmost ring through development, automating and deploying to operating in the central circle. The six spokes that segment these rings are testability, securability, reliability, observability, flexibility and scalability. These represent the production considerations every engineer has to consider throughout any engineering work, according to Freeman.

People tend to adopt a persona that they carry through their working life. A decade ago, these descriptions would have identified the sole role of an employee. Today, while people may continue to identify as a developer, administrator or architect, their workload requires them to play many different roles and use different skill sets.

But no matter what role the developer is fulfilling at any moment in the SDLC, the issues they have to consider remain the same, according to Freeman. It is these that compose the six spokes of the model.

The model as it currently stands isn’t a final concept, but a conversation starter, according to Freeman, acknowledging that “the considerations listed are not all-encompassing.” However, she believes they provide a distillation of the elements of the software development lifecycle and encourages feedback and input to create new iterations.

“I can’t write this story alone. I need you,” she said. “Software development isn’t a straight line nor is it a perfect loop; it is an ever-changing complex dance.”

Freeman believes her revolutionary model more accurately represents the fluidity and interactivity of the modern SDLC than the traditional linear one and urges the IT community to start a conversation around the issue.

“We need a modern model for this modern era, and I believe this is just the revolution to get us started,” she concluded.