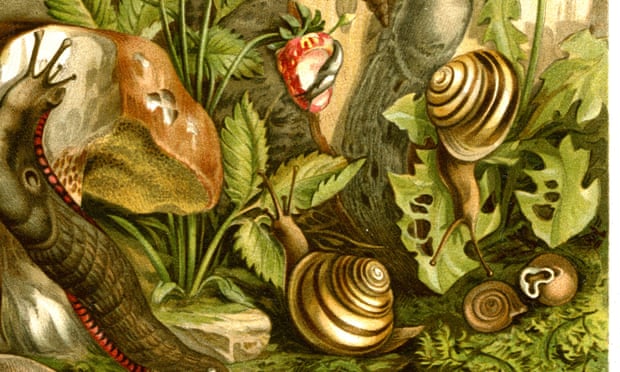 A garden snail is eating your roses. “Little snail / Dreaming you go / Weather and rose / Is all you know,” wrote Langston Hughes. It is night time, the snail’s time, after dew or rain – when the snail is happiest, because the conditions are optimal for slime-walkers.

The snail is blind. It knows the rose only by its smell and soft petals. You think you can hear the rasping of tiny teeth: scraping, scraping away at your roses. The snail is deaf: it does not hear your complaints. It could terrorise you for five years – or 10, if you chose to keep it as a pet.

Inside the snail are 100 eggs. Inside the eggs, 100 baby snails growing 100 protoconches. When they hatch, they will be smaller than a grain of rice and very pretty. Their mantles will produce electric currents, which push calcium ions into place. As their shells will grow, the protoconches remain the pinnacle of the spiral, ever-taller.

“So let us praise while yet we may / Those things that take the tortuous way / Which twist and turn spontaneously / To stem the trend to entropy,” the poet Gus Ferguson wrote in his book Snail Morning, in which snails can be found “caravanning with blind intent” or arriving 13 years too late at the birth of Christ.

They get their scientific name from their shells – cornu aspersum, “scattered” or “splashed over” shell, which seems to refer to its tabby pattern (tabby, itself, comes from the French word tabis, for “a rich watered silk”) – and their English name from the German, Schnecke.

In King Lear, the fool says the snail’s shell is a “case” for “his horns”. To the poet Mary Ruefle, the shell is headgear, too: “And I became the snail I always was / crossing the field in my helmet.” To the ancient Egyptians, snails were afterlife food for Ibis mummies. There are millions of bird mummies in Egyptian shrines. Scans show that their organs were removed, embalmed and replaced; their stomachs were filled with grain; and snails were placed in their beaks.

Recently, I passed two snails on the sidewalk. One was alive, the other was squashed. Sometimes it seems as though you’ll never get to where you’re going. Things move too slowly; you find yourself needing to swerve and the swerve itself takes ages. Sometimes, things move very fast. Suddenly, you are in shadow as an enormous, unthinking foot bears down: crunch.