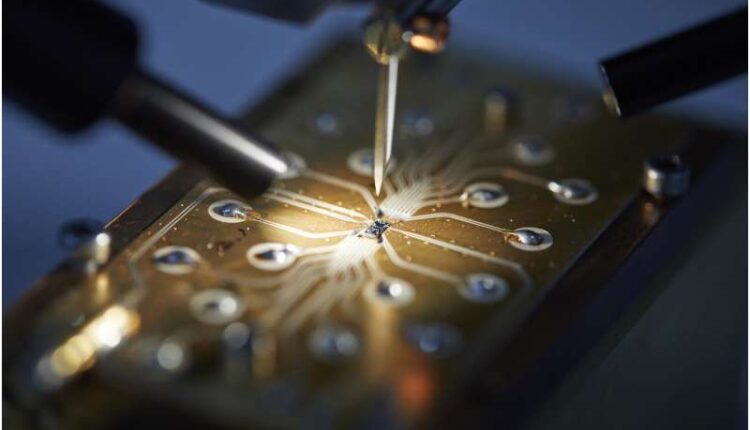 Quantum engineers from UNSW Sydney have removed a major obstacle that has stood in the way of quantum computers becoming a reality. They discovered a new technique they say will be capable of controlling millions of spin qubits—the basic units of information in a silicon quantum processor.

Until now, quantum computer engineers and scientists have worked with a proof-of-concept model of quantum processors by demonstrating the control of only a handful of qubits.

But with their latest research, published today in Science Advances, the team have found what they consider “the missing jigsaw piece” in the quantum computer architecture that should enable the control of the millions of qubits needed for extraordinarily complex calculations.

Dr. Jarryd Pla, a faculty member in UNSW’s School of Electrical Engineering and Telecommunications says his research team wanted to crack the problem that had stumped quantum computer scientists for decades—how to control not just a few but millions of qubits without taking up valuable space with more wiring, which uses more electricity and generates more heat.

“Up until this point, controlling electron spin qubits relied on us delivering microwave magnetic fields by putting a current through a wire right beside the qubit,” Dr. Pla says.

“This poses some real challenges if we want to scale up to the millions of qubits that a quantum computer will need to solve globally significant problems, such as the design of new vaccines.

“First off, the magnetic fields drop off really quickly with distance, so we can only control those qubits closest to the wire. That means we would need to add more and more wires as we brought in more and more qubits, which would take up a lot of real estate on the chip.”

And since the chip must operate at freezing cold temperatures, below -270°C, Dr. Pla says introducing more wires would generate way too much heat in the chip, interfering with the reliability of the qubits.

“So we come back to only being able to control a few qubits with this wire technique,” Dr. Pla says.

The solution to this problem involved a complete reimagining of the silicon chip structure.

Rather than having thousands of control wires on the same thumbnail-sized silicon chip that also needs to contain millions of qubits, the team looked at the feasibility of generating a magnetic field from above the chip that could manipulate all of the qubits simultaneously.

This idea of controlling all qubits simultaneously was first posited by quantum computing scientists back in the 1990s, but so far, nobody had worked out a practical way to do this, until now.

“First we removed the wire next to the qubits and then came up with a novel way to deliver microwave-frequency magnetic control fields across the entire system. So in principle, we could deliver control fields to up to four million qubits,” says Dr. Pla.

Dr. Pla and the team introduced a new component directly above the silicon chip—a crystal prism called a dielectric resonator. When microwaves are directed into the resonator, it focuses the wavelength of the microwaves down to a much smaller size.

“The dielectric resonator shrinks the wavelength down below one millimeter, so we now have a very efficient conversion of microwave power into the magnetic field that controls the spins of all the qubits.

“There are two key innovations here. The first is that we don’t have to put in a lot of power to get a strong driving field for the qubits, which crucially means we don’t generate much heat. The second is that the field is very uniform across the chip, so that millions of qubits all experience the same level of control.

Although Dr. Pla and his team had developed the prototype resonator technology, they didn’t have the silicon qubits to test it on. So he spoke with his engineering colleague at UNSW, Scientia Professor Andrew Dzurak, whose team had over the past decade demonstrated the first and the most accurate quantum logic using the same silicon manufacturing technology used to make conventional computer chips.

“I was completely blown away when Jarryd came to me with his new idea,” Prof. Dzurak says, “and we immediately got down to work to see how we could integrate it with the qubit chips that my team has developed.

“We put two of our best Ph.D. students on the project, Ensar Vahapoglu from my team, and James Slack-Smith from Jarryd’s.

“We were overjoyed when the experiment proved successful. This problem of how to control millions of qubits had been worrying me for a long time, since it was a major roadblock to building a full-scale quantum computer.”

Once only dreamt about in the 1980s, quantum computers using thousands of qubits to solve problems of commercial significance may now be less than a decade away. Beyond that, they are expected to bring new firepower to solving global challenges and developing new technologies because of their ability to model extraordinarily complex systems.

Next up, the team plans to use this new technology to simplify the design of near-term silicon quantum processors.

“Removing the on-chip control wire frees up space for additional qubits and all of the other electronics required to build a quantum processor. It makes the task of going to the next step of producing devices with some tens of qubits much simpler,” says Prof. Dzurak.

“While there are engineering challenges to resolve before processors with a million qubits can be made, we are excited by the fact that we now have a way to control them,” says Dr. Pla.