From bananas to mangoes, Europe grows tropical fruit – and you can thank global warming for that 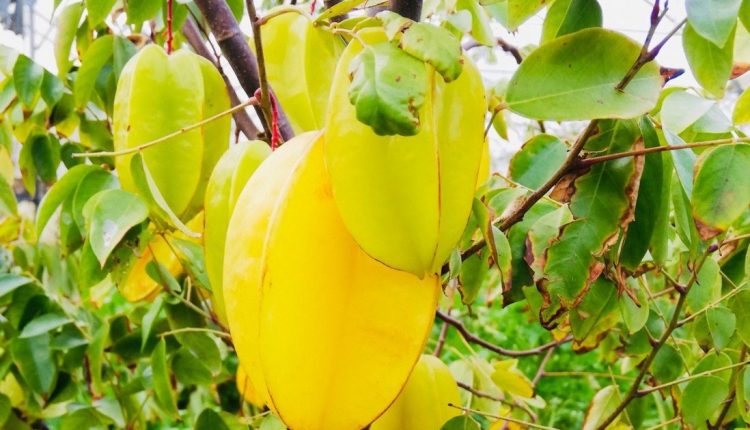 Plantations of tropical fruits – bananas, mangoes, papayas, passion fruits, finger limes, pomelo and avocados – are rising along the shores of the Mediterranean, where fig trees and olive groves have grown for centuries.

Travellers visiting southern Europe are often surprised to see lychee and kiwi trees, pitaya (dragon fruit) bushes and other exotic fruit typically found in tropical or subtropical Asian and South American countries. What is going on?

Thanks to climate change

, a fruit revolution is under way in Europe’s south, from Portugal and Spain to Italy and Greece. Asian and Latin American fruits have found fertile ground on Mediterranean shores in organic, non-intensive plantations, and chefs and bartenders are making the most of the unusual (to them) produce with tropical fruit ice-creams

“All is zero food miles and it’s helping revamp the local economy, bringing profit to growers,” says Italian agronomist Ottavio Cacioppo, who was the first to produce Italian kiwis in the 1970s. 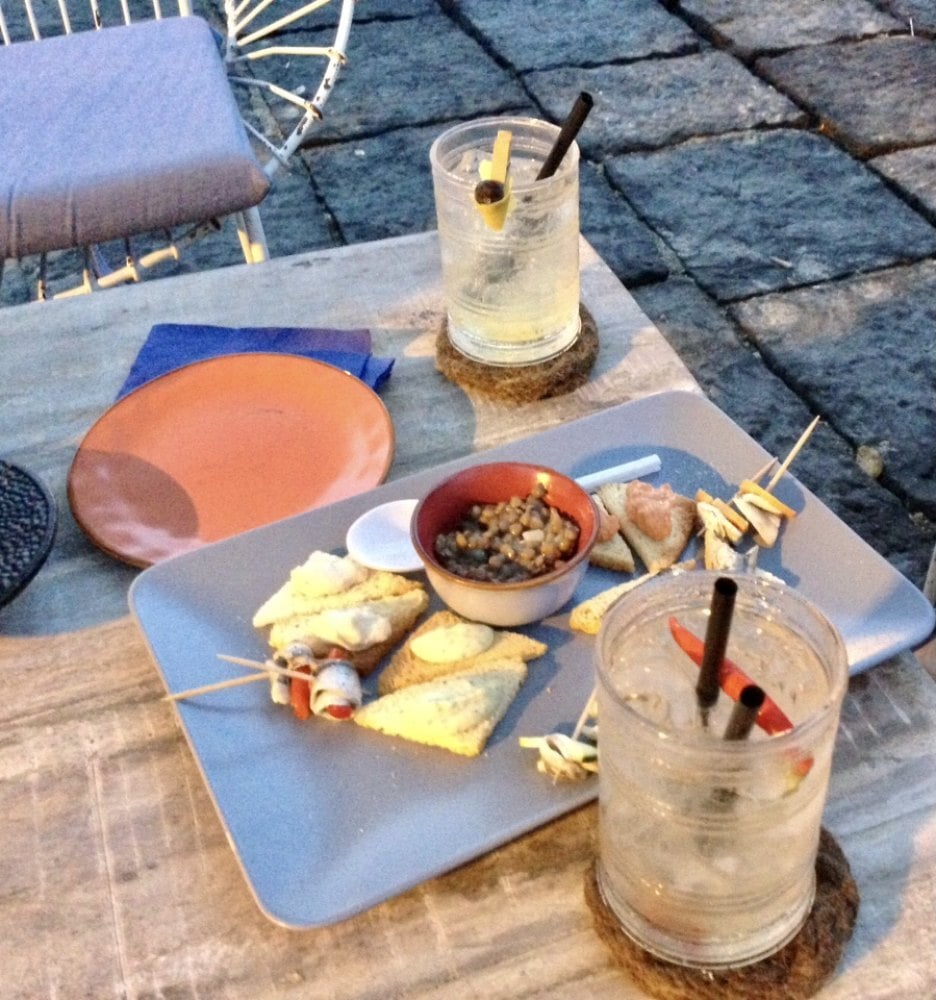 Italy is the world’s second largest producer of kiwi

, which originated in China. In his estate, south of Rome, Cacioppo also grows pitaya and other tropical produce.

“Even though production is small-scale, it is niche and high-quality, and allows local farmers to diversify traditional productions with alternative ones to compensate for low annual yields of, say, lemons and oranges or when such trees are attacked by parasites,” Cacioppo says. “Growing non-local exotic fruits has been a winning move.” 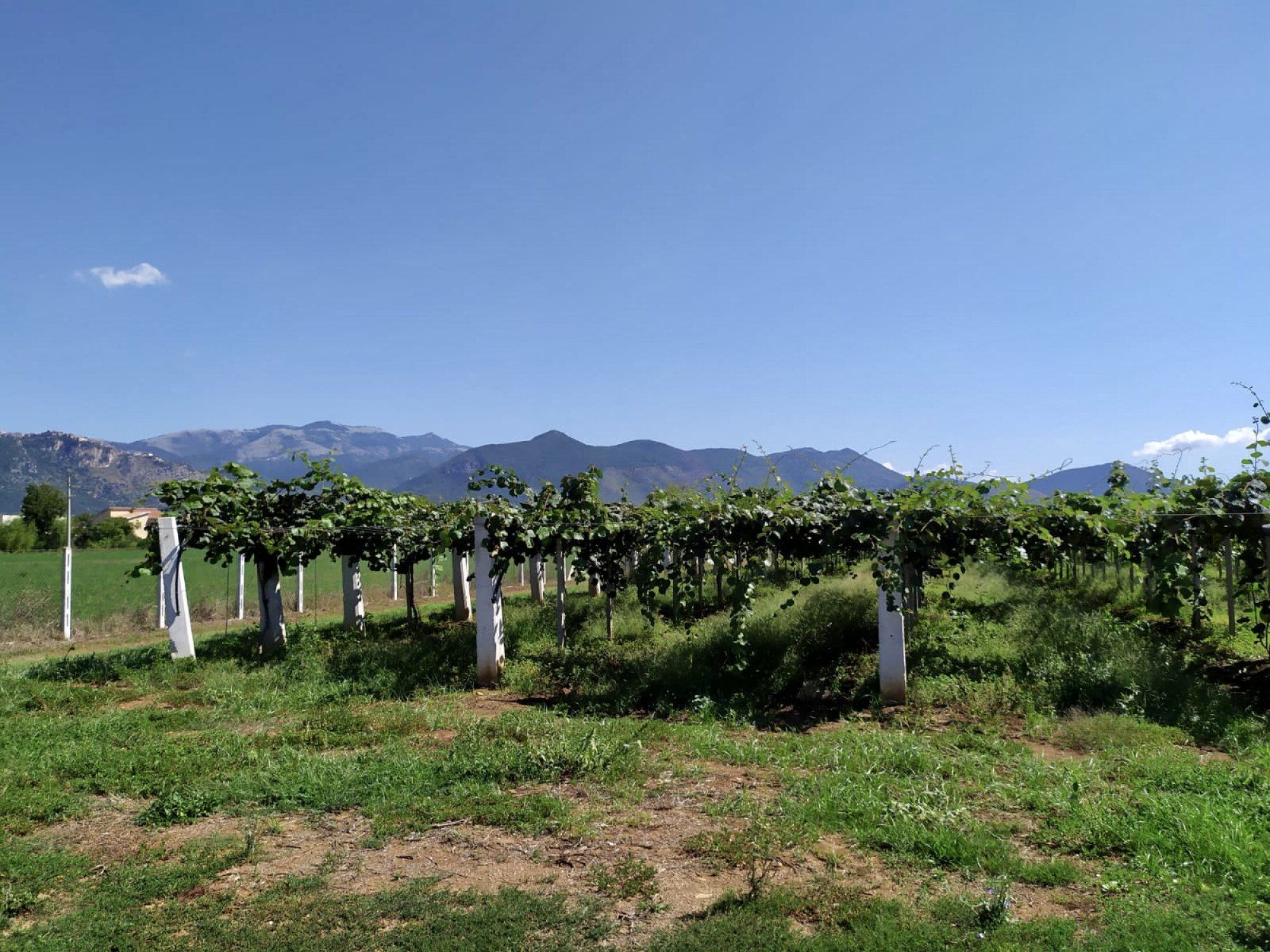 A kiwi plantation in the south of Rome. Photo: Silvia Marchetti

Melons, lemons, mandarins and tangerines (brought centuries ago along the Silk Road trade route) used to be the most exotic fruit grown in Italy and other Mediterranean countries.

As average temperatures increased, farmers realised their land would become suitable for growing warm-weather fruits. Those open to experimentation worked with university experts to learn more and flew to tropical-fruit-bearing countries to bring home the best seeds.

EVERY SATURDAY
SCMP Global Impact Newsletter
By submitting, you consent to receiving marketing emails from SCMP. If you don’t want these, tick here

The ideal microclimate for tropical fruits in Italy is the southernmost region of Sicily, followed by Puglia and Calabria in the south, and central Latium. 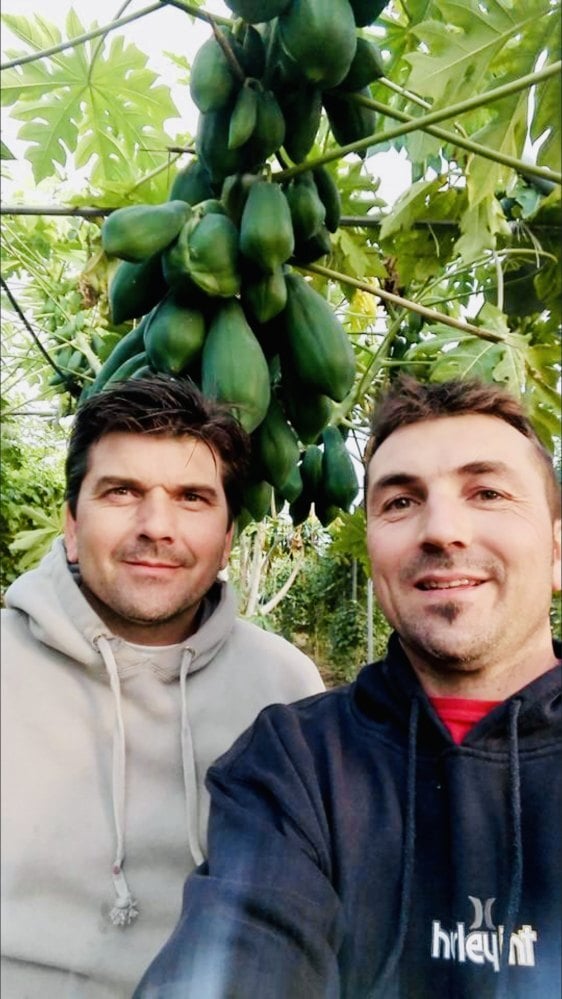 Farmers Rosolino Palazzolo (right) and his brother under a papaya tree. Photo: The Palazzolo family

on the coast near the Sicilian capital city of Palermo. They’re leading producers of tropical fruits which they ship across Italy and abroad, and have seen demand for their grown-in-Sicily produce increase over the last few years.

“We only have 11 hectares [27 acres] in a superb area where the sea wind acts as a natural balm,” says one brother, Rosolino Palazzolo. “We don’t stress our plantations and have adopted a green approach. We heal our tropical trees, when needed, with other plants by applying so-called agro-homeopathy. Instead of feeding [the trees] medicine in the form of nasty pesticides

, we use natural herb remedies.”

The Palazzolo estate is a patchwork of colourful tropical shrubs, and visitors can take shelter from the sultry sun under the shade of green baby banana trees. Guided tours are organised for people curious to see what these “foreign” fruits look and taste like, and they can even pick their own from the orchards. 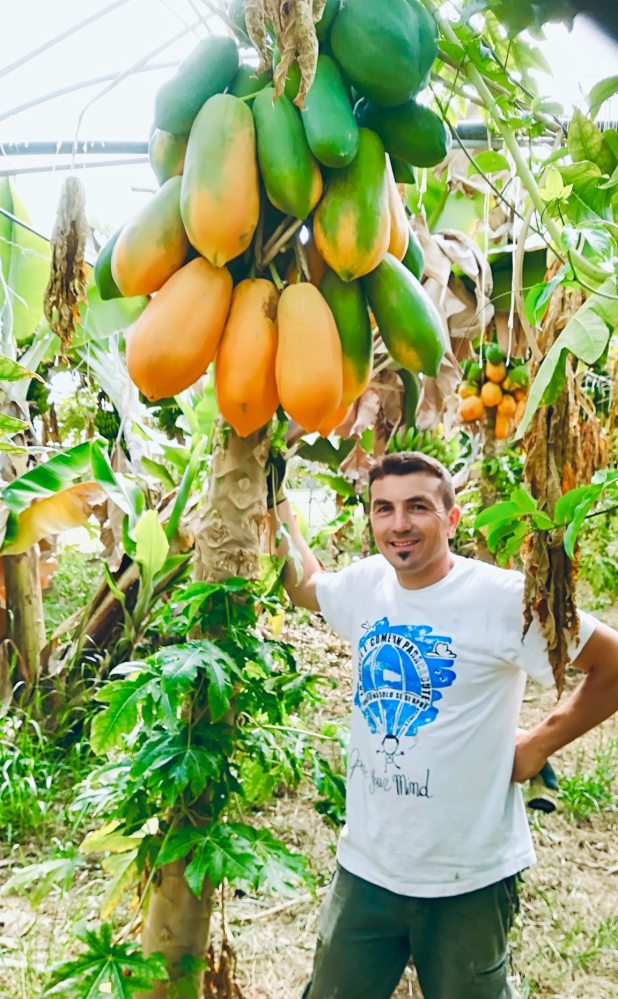 Rosolino Palazzolo says he uses natural herb remedies instead of pesticides on his trees. Photo: The Palazzolo family

are grown on the flanks of Mount Etna in Sicily, where the soil is extremely fertile thanks to past volcanic eruptions. Sicily has an Africa-like climate, with higher temperatures compared with the rest of Italy.

Here, there are also fields of feijoa, pineapple and guava, while experimental coffee and chocolate plantations are also growing. Lychees, native to the Chinese provinces of Guangdong and Fujian, are being grown alongside star fruit, Japanese medlar (loquat), lime and even coconut.

One of the most popular fruits in local markets is black sapote, which the Italians call “chocolate fruit” for its soft, dark, Nutella-like pulp that’s easy to spread on a slice of bread or scoop up with a spoon. There are currently more than 500 hectares of tropical fruit plantations in Sicily. Although the exotic fruit business has flourished in Italy in the last decade, the Iberian Peninsula (which includes Spain and Portugal) was introduced to tropical fruit during the Spanish colonisation of the Americas and Asia in the 15th and 16th centuries – possibly even before that. What is more recent for Spain and Portugal is how much exotic fruit production has increased.

Southern Spain is the kingdom of mangoes, avocados, lychees, carambola (star fruit) and cherimoyas. Above all, though, are bananas

The top European “tropical” spots are the coastal cities of Malaga, Granada and the Canary Islands just off the African coast. The cultivation of platanos (as bananas are called there) started in the early 1900s in this stunning archipelago, but took years to take hold. Now, the Canary Islands are the leading rural sector, employing 7,000 growers. Platanos are small and have a less intense yellow colour and a distinctive flavour.

In Spain, equatorial resorts offer stays amid extravagant plantations where guests are offered fruit tastings amid breathtaking scenery. These resorts are usually old lavish mansions dating back to the Arab rule. 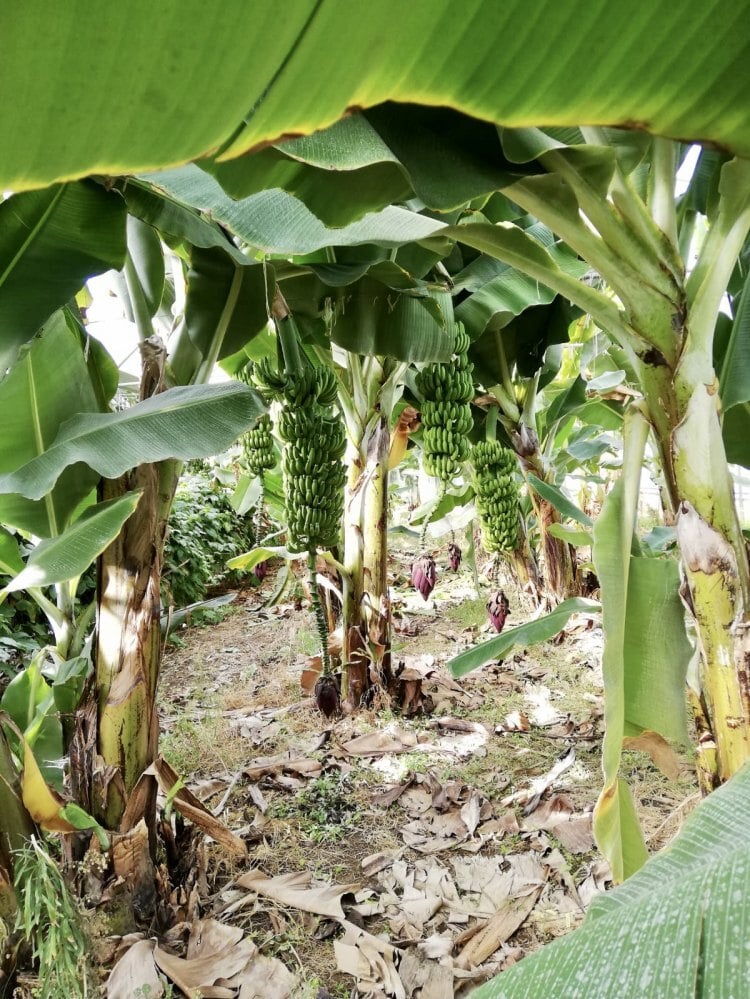 Portugal is famous for its premium passion fruits, avocados, mangoes and pineapples, but mainly for the anona de Madeira (cherimoya), a fruit that hails from the Peruvian Andes. Similar tropical fruits can be found in Greece – especially on the southern island of Crete, where baby bananas, passion fruits, mangoes

and loquats can be seen at local markets.

The common denominator of all exotic fruit grown in Europe is that producers try to avoid pesticides, preservatives and other chemical substances that many growers in other countries use to boost yield and to preserve the fruit as it is shipped.

The exotic fruit revolution is not only a matter of higher nutritional care from local consumers, but also a means to promote domestic over imported produce. “People in Europe have come to appreciate the qualities and taste of tropical and subtropical fruits, but now that they have a choice, they want to buy local and support their farmers so they can also have clear information on traceability,” says Cacioppo. 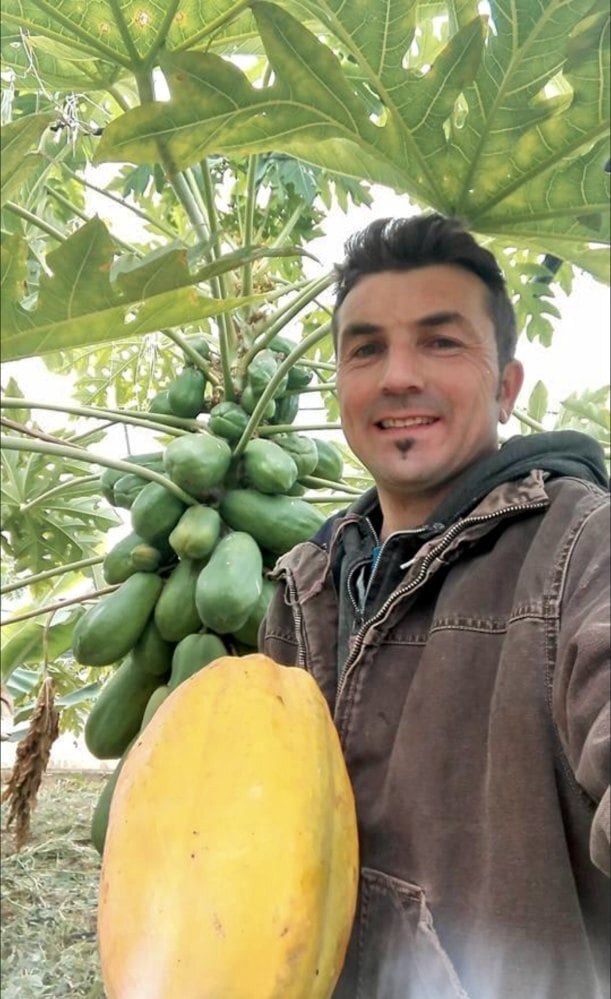 Local produce is more economical, too. In Italy, a Sicilian papaya is €3 (US$15) per kilogram (2.2 pounds), which is cheaper than the imported fruit. Tropical fruits are seen as trendy and it’s not uncommon to see a kumquat bush in a pot on a balcony (the fruit is originally from China), or planted in someone’s garden. These sweet-bitter fruits are eaten as a digestif after a heavy meal.

“[Lemon caviar] is incredibly expensive, but it really enhances the flavour of my fish crudités,” says chef Gaetano Nanì of restaurant Hycesia on the island of Panarea. “It’s great with king prawns and what makes me real proud is it is 100 per cent made in Sicily.” 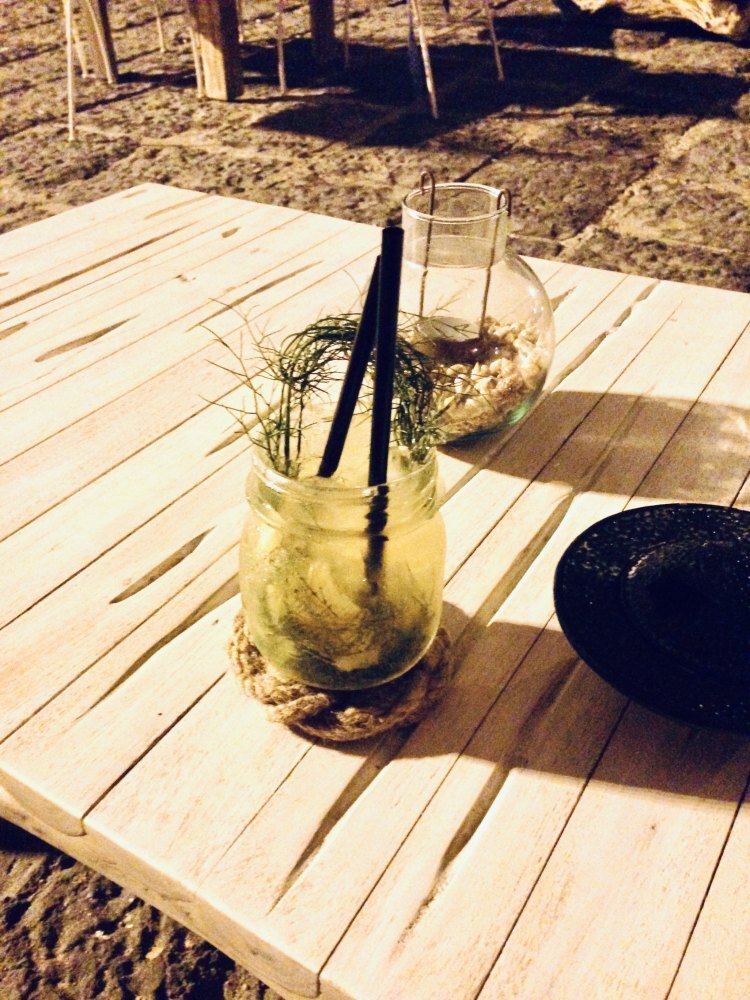 Finger lime estates can also be found close to Rome, in the Pontine Plains’ former marshland, connected to the sea by a network of lakes. The soil is incredibly fertile and there’s a warm microclimate similar to that of Sicily.

All the locally grown tropical fruits are being used by chefs eager to innovate. Italian restaurants are making artisan ice creams and topping their salads with mangoes and avocados. Mozzarella is served with kiwi or mango instead of tomatoes and basil. And bars are making cocktails with passion fruits and black sapote juice, and putting finger limes in  prosecco