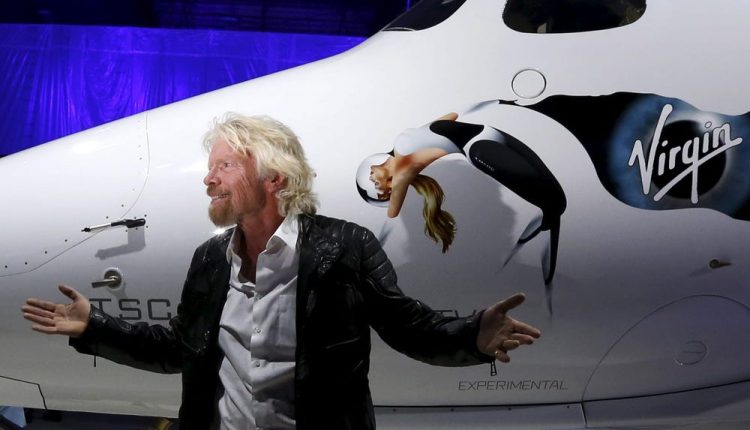 Share
NEWSLETTER
Sign up for the Insider Healthcare newsletter for the latest healthcare news and analysis delivered straight to your inbox.

If Virgin Galactic’s flight on Sunday goes as planned, its founder, Richard Branson, will become the first person to launch to the edge of space on his own company’s commercial vehicle. Blue Origin’s founder, Jeff Bezos, plans to do the same thing a mere nine days later.

Branson, for his part, has tried to downplay the competitive element of this billionaire space race — even though he announced his plan just weeks after Bezos shared his. Branson was originally scheduled to go on the Virgin Galactic flight after this one.

“It’s just an incredible, wonderful coincidence that we’re going up in the same month,” he told The Washington Post.

Blue Origin, meanwhile, has been anything but subtle in attempting to assert its superiority. The company maintains that Virgin Galactic can’t reach space at all.

“We wish him a great and safe flight, but they’re not flying above the Kármán line and it’s a very different experience,” Blue Origin CEO Bob Smith told The New York Times last week, referring to Branson.

The Kármán line is a hypothetical boundary between Earth and space, about 62 miles (100 kilometers) above sea level. That’s where New Shepard, Blue Origin’s rocket, is set to carry Bezos on July 20. Virgin Galactic, by contrast, will carry Branson and his crewmates to an altitude of 55 miles.

A Friday tweet and graphic from Blue Origin went after Virgin Galactic even more directly.

“From the beginning, New Shepard was designed to fly above the Kármán line so none of our astronauts have an asterisk next to their name. For 96% of the world’s population, space begins 100 km up at the internationally recognized Kármán line,” it said.

Where is the boundary between Earth and space?

However, NASA, the US Air Force, and the Federal Aviation Administration have awarded astronaut wings to pilots who flew past 50 miles. The FAI has also proposed a workshop to explore the idea of lowering the boundary from 62 miles to 50 miles.

In Blue Origin’s Friday tweet, the company suggested that right now, “only 4% of the world recognizes a lower limit of 80 km or 50 miles as the beginning of space” — implying that every country except the US relies on the Kármán line.

“New Shepard flies above both boundaries. One of the many benefits of flying with Blue Origin,” the company said.

Neither Virgin Galactic nor Blue Origin, however, have a vehicle that reaches low-Earth orbit.

Determining a boundary between Earth and space matters for more than billionaires’ egos or corporate profits. It’s important for legal reasons: The FAA regulates both aircraft and spacecraft in the US, but different sets of laws and treaties apply to airplanes in air space and rockets in outer space.

A rocket versus a space plane

Blue Origin’s spicy graphic highlighted other differences between its New Shepard and Virgin Galactic’s SpaceShipTwo. Notably, that the former involves a rocket, while the latter does not.

SpaceShipTwo, a high-altitude plane called VSS Unity, does not blast off from a launchpad. Instead, it gets carried aboard a double-fuselage mothership, which climbs to about 50,000 feet, or nearly 10 miles. The ship then releases the space plane, after which Virgin Galactic pilots must fire the plane’s engines, point the VSS Unity almost straight upward, and accelerate to more than three times the speed of sound.

Once the space plane gets about 55 miles above sea level, the pilots cut the engines and allow the vehicle to drift. That way, passengers can feel weightless for about five minutes. Through the space plane’s 17 windows, they should be able to see the Earth curving below them.

“I can’t wait,” Branson told NBC’s Today. “At that moment, we will have become astronauts. I will pinch myself and pinch myself again and again.”

The two vehicles land differently, too. For its return, the VSS Unity should rotate its wings and booms back into place to catch the wind and glide to a runway landing. Blue Origin’s space capsule, meanwhile, is designed to fall back toward Earth, with three parachutes ballooning into the air to slow it.

Everything New in the iOS 15 Messages App: Shared With You, Photo Collages, Memoji Updates and More