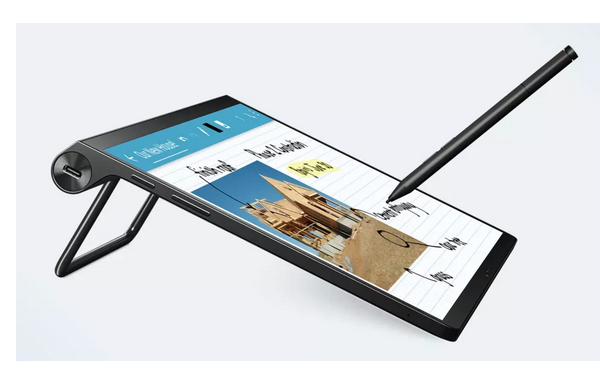 The Lenovo Yoga Tab 13 headlines a new crop of slates that look to give the Android crowd more options when trying to find the best Android tablet — and an Android tablet that’s even bigger than the 12.9-inch iPad Pr0 2021.

The Yoga Tab 13 is notably cheaper than the $1,099 iPad Pro at just $679, and Lenovo’s tablet promises even longer battery life along with a Dolby Vision display and built-in kickstand. But you shouldn’t expect the same amount of power and versatility as the iPad Pro.

The Yoga Tab 13 and 11 seem entirely focused on consuming content, thanks to the former’s Dolby Vision support, quad-speaker setups and built-in kickstands. Then there’s the Tab P11 Plus, which will work with a detachable keyboard and kickstand, somewhat like the Lenovo Chromebook Duet.

The Yoga Tab 13 may be the most expensive option, but it’s also the most noteworthy option. And that’s not just because it’s Lenovo’s first 13-inch slate in years.

It’s the only one of the trio with a Dolby Vision-supported display, which gets plenty bright (Lenovo rates it for up to 400 nits). For sound, it’s got a quad-speaker setup with JBL audio (which supports Dolby Atmos), and two of those speakers are built into the soundbar at the base of the Tab 13.  For inking, it supports the Lenovo Precision Pen 2 (pricing TBA).

It’s also got superior form and function on its side as well. Its micro-HDMI port means you can turn it into an external display for a laptop, while its Alcantara-clad back panel gives it a super-soft touch. And while its 1080p display probably can’t beat the mini-LED (2388 x 1668) panel in the 12.9-inch iPad Pro, it costs $420 less, at $679.

It’s also going to be the fastest of the pack, with its octa-core Qualcomm Snapdragon 870 that hits up to 3.2GHz. Apple’s iPad Pro and M1 chip aren’t concerned, though. The Snapdragon 870 in the Moto g100 phone only hit a 2,855 on Geekbench 5’s multi-core performance test, while the iPad Pro 2021’s M1 chip more-than-doubled that, with an 7,298. Lenovo may use a different version of the 870, but we’re not sure it will catch up. It will likely beat the Galaxy Tab S7 Plus‘ Snapdragon 865+ chip, but that tablet’s over a year old, and will likely be replaced soon, by the incoming Galaxy Tab S8 Ultra.

Just like the Yoga Tab 11, the Tab 13 doesn’t require you buy a stand to prop it up. On the rear, there’s a kickstand that comes out that can also double as a handle to carry it, or to hang it on a wall. The latest iPad Pro has no such built-in stand.

The Yoga Tab 13 is rated to last up to 12 hours of offline video playback on a single charge, and Lenovo didn’t provide estimates for endurance on web-browsing or streaming. That battery life may be different depending on where you get it, though, as Lenovo’s only provided estimates for the versions going out to the non-U.S. markets.

The Lenovo Yoga Tab 11 is more compelling than its big brother in one key way: it costs less than half as much, at $319. In exchange for that steep price cut, you’re losing some nice perks.

The octa-core MediaTek Helio G90T processor won’t be nearly as fast (its cores max out at 2.05GHz) and its 11-inch panel doesn’t pack Dolby Vision support. Audio isn’t a wash, though, as you’ve still got a quad-speaker array with Lenovo’s “Premium Audio Solution” that’s been optimized with Dolby Atmos. I didn’t get to hear it for myself, so we look forward to testing it out in our own spaces.

Oh, and you’re trading Alcantara away for what Lenovo calls a “high tenacity fabric.” Lenovo rates the Yoga Tab 11 as lasting up to 15 hours on a single charge, but that’s just for music playback. For video or web-browsing, that estimate falls to up to 12 hours.

The Yoga Tab 13 is due this August.

If Lenovo’s new tablets were a boy band, the $259 Tab P11 Plus (coming in August) would be “the bookish one,” as it’s designed for getting work done. Unlike the Yoga Tab 13 and 11, which are more built for consuming video and audio, the Tab P11 Plus will work with the Keyboard Pack (an attachable keyboard and kickstand). That’s just going to cost extra, as it’s sold separately (pricing is not available yet).

The Tab P11 Plus has a neat duo-tone design on its back, that helps it stand out from the Shadow Black Yoga Tab 13 and Storm Grey Yoga Tab 11. Lenovo rates it as lasting up to 15 hours for music playback, and 12 hours for video or web browsing. Again, that estimate is for the versions not sold in the States, so we’ll have to test it out on our own.

We can’t wait to get these tablets in for testing, to see if they’re strong iPad alternatives in the world of Android tablets. Currently, this field is dominated by Samsung at various price points that get steep quickly, and Amazon on the low. With this many options, it seems like Lenovo is trying to carve out a middle-ground.

How to Disable and Remove the Microsoft Edge Math Solver

5 reasons to use node.js