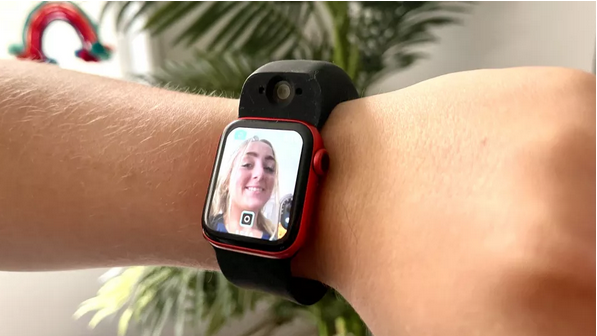 I wear my Apple Watch 6 every day, but this week, I wore it a bit differently. Instead of stretching a color-matched Solo Loop over my hand, I strapped on Wristcam, the first Apple-certified smart band with a built-in camera.

Wristcam has been on my radar for a few months now, promising the ability to turn the Apple Watch into a capable camera. For $299, Wristcam’s in-strap component packs both world-facing (8-megapixel) and self-facing (2-megapixel) lenses you can control either with the band’s manual controls or with the watchOS app.

I finally got one in to test out, and wore it to see whether it actually comes in handy, and if it helps make my Apple Watch more autonomous.

I’ve been thinking a lot lately about how the Apple Watch could gain independence from the iPhone. While watchOS 8 is bringing new digital keys so you could ditch your wallet, among other advancing updates, I still don’t want to leave home without my smartphone’s cameras.

My morning started at 7 a.m. with a Central Park walk with my dog, Steve. Fumbling Steve’s leash, my keys, 6.7-inch iPhone and sometimes a coffee, I usually refrain from taking pictures of my black lab while we’re out and about. Rude, I know.

Even when he’s freed from his leash to run with other four-legged friends, recording video is difficult. But this morning, I had a camera strapped to me, so I didn’t have to dig in my pocket for my phone and risk losing sight of my dog. This is when I realized Wristcam felt a little like a GoPro, meaning I could capture action content while staying the moment.

What surprised me most in the morning was how comfortable it felt despite it being much larger than all the best Apple Watch bands. The chunky component doesn’t seem ideal for a weight-lifting workout (plus Wristcam makes the Apple Watch feel heavier), but the silicone straps fared fine on my two-mile walk, even in Northeast’s heat wave humidity.

And shockingly, nothing weird happened on my walk, but in New York City “you gotta see to believe it” moments take place all the time. I imagine the spycam on my wrist would be great for those occasions, although I’ll admit orienting it takes practice. At first my photos and videos came out slanted, or with the subject off-center.

Take me out to the ball game

I assumed I would need to charge Wristcam at some point before my evening outing — a baseball game — but at 5 p.m. it held about 50% battery. As its own self-contained system, Wristcam pairs to Apple Watch via Bluetooth Low Energy to sustain “all day” battery, and I found that spec holds up, although I didn’t use it for the majority of my workday. It seems the battery drains much faster when the cameras are on.

As I got ready to leave for Yankee Stadium, I snapped a few selfies to send to friends. Maybe I just have short arms, but it requires real wrist mobility to get the right angle. And even then, I don’t think I could fit another person in frame. I suppose I could take Wristcam off and hold it further from my face in a pinch, but that kind of defeats the purpose.

At the ballgame, I took a few photos over the heads of the folks sitting in front of me. But the stadium lights and massive scoreboard caused some blur. If I wanted a close up of the players, crispy details of my chicken tenders or a good shot of me next to the field, I would’ve used my iPhone.

Would I wear Wristcam regularly?

Upon arriving home from the game, I finally took Wristcam off for my Apple Watch to charge before bed, since I usually wear it overnight for sleep tracking. For the same reason, it was time to swap out my camera-laden strap for my slim and reliable ‘ole Solo Loop.

So would I swap it out for Wristcam again in the morning? I can think of several specific instances when having Wristcam would let me capture moments that I’d otherwise miss while reaching for my iPhone. I loved it for walking my dog, for example.

But as much fun as I had showing it off to fellow fans in line for the Yankees game, I didn’t leave with quality photos. My iPhone’s camera is superior, so Wristcam isn’t an everyday accessory, at least not for me. Until Apple adds a native camera to Apple Watch, though, Wristcam provides an impressive solution for snapping photos quickly and sans-smartphone.