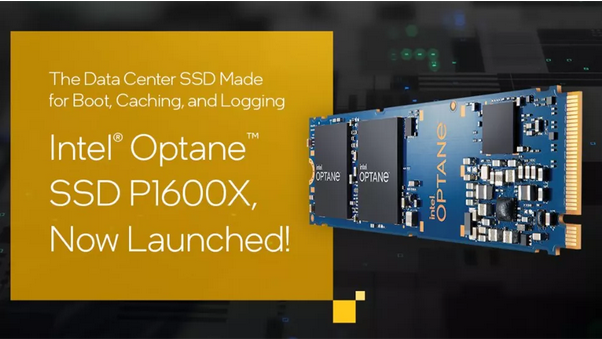 Intel’s Optane SSD P1600X family includes drives featuring 58GB and 118GB capacities, enough for an operating system and things like caching, but not meant to store huge amounts of data. These drives are supposed to sit in front of higher-capacity SSDs or HDDs, boot an OS and then cache frequently used data to either improve user experience or meet QoS requirements of a server/datacenter. The drives come in an M.2-2280 form-factor and use a PCIe 3.0 x4 interface to maintain compatibility both with ‘legacy’ machines (how Intel puts it) as well as the latest servers supporting PCIe Gen 4.

Not anywhere close to the performance of the best SSDs, the Optane SSD P1600X SSDs are rated for an up to 1870 MB/s sequential read speed, an up to 1050 MB/s sequential write speed as well as up to 426K/243K random read/write speeds. By today’s standards, these drives are not really fast, unless multiple of such drives are used in RAID 0 mode for maximum performance.

But this is where unique advantages of 3D XPoint memory come into play. The drives can endure up to six drive writes per day (6 DWPD) over five years (something you cannot expect from 3D NAND-based SSDs featuring similar capacities) and offer up to 2 million hours mean time between failures. Also, Intel says that the drives feature rather low 7μs average read latency and a 10μs average write latency, which is important for caching drives.

It is noteworthy that Intel’s Optane SSD P1600X are not the first boot/caching drives in the company’s lineup. The manufacturer already released its Optane SSD 800p-series 58GB and 118GB drives aimed at exactly the same market segment back in 2018. Those SSDs, however, featured a PCIe 3.0 x2 interface and were noticeably slower both in terms of sequential and random read/write speeds. They also provided a considerably higher write latency.

The surprising part about the announcement is, of course, that Intel decided to introduce a successor for its rather niche family of products amid uncertainties with 3D XPoint memory supply now that Texas Instruments acquired the fab which produced this memory from Micron. Intel has wanted to make 3D XPoint memory at its 3D NAND fab in China (which is about to be transferred to SK Hynix, but which will be operated by Intel and SK Hynix together for some time), so Intel may have enough memory for all of its product lineups. As for the Optane SSD P1600X product series launch, perhaps, Intel needs to serve very particular customers with its caching drives, which is why it had to introduce this new lineup.

Qualcomm says that Huawei is as powerful as Apple