The Windows 11 leak this past week was good timing for me, as I was able to take it with me on my trip to Mexico City and see what it’s like in the real world. 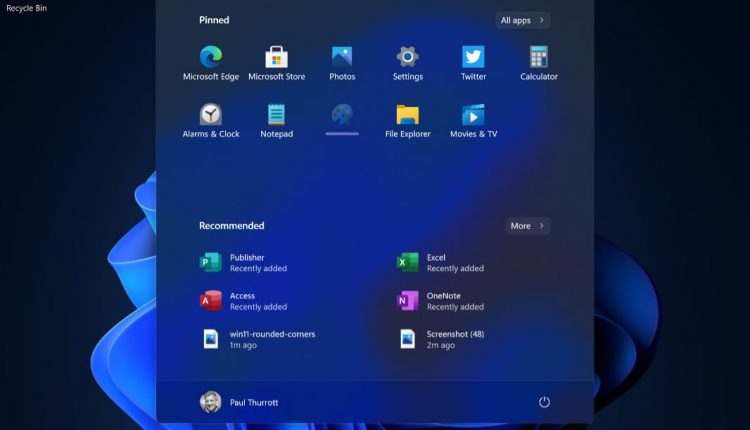 And I’m happy to report that it’s mostly good news. I’ve only encountered two big bugs that I will chalk up to this being pre-release—and unauthorized—software.

So let’s start there.

The first issue concerns drag and drop. One of my common workflows is to save one or more images to my desktop and then drag them into Affinity Photo so that I can crop and otherwise edit them and then save them in JPEG format so that they can be used on the website. I normally do this by selecting the image(s) on the desktop and dragging them to the Affinity Photo icon that’s pinned to my taskbar; if the application is running, it will come to the forefront so that I can drop the file(s) into the application and edit them.

In Windows 11, this doesn’t work. When I drag the image files to the Affinity Photo taskbar icon, nothing happens. It’s like the application isn’t even running. To be clear, this isn’t an Affinity Photo issue, it happens anytime you try to drag files to a pinned taskbar app.

Fortunately, there’s a workaround. In Windows 11, I can select the image file(s) I want to use in Affinity Photo and begin the drag process with the mouse/touchpad. But then I have to use Alt + Tab to bring Affinity Photo to the forefront. When I do so, I can drop them into the app normally and everything works as before. (If the application is visible onscreen already, this isn’t necessary, as I can just drag directly into the app.)

The second issue is Microsoft Paint. This didn’t occur on my desktop PC, but on the HP Spectre x360 I’m using during my trip, Paint stopped working. There are three problems. First, I usually pin Paint to the taskbar, but it keeps disappearing no matter how many times I re-pin it. Second, there’s no Open option when you right-click an image file; in Windows 10, this would open the image file in Paint. And third, and most problematic, Paint won’t even run anymore, though it did when I first installed Windows 11. It’s in the Start menu, and it’s being updated by the Store. But it will not run.

To workaround my Paint issues, I’ve been using Paint 3D. This lets me paste Print Screen-based screen captures into a new document, crop them, and save them as JPEGs. And while it’s not my favorite app, it does work. I suppose I could install Paint.NET or some other app instead.

Beyond that, Windows 11 is working exactly like Windows 10 does. I very much prefer its centered taskbar icons. But I can see the case for moving at least the Start button to the far left, and I’d like to see some tray area consolidation because all those icons and UI elements take up a lot of space and ruin the centered look of the taskbar.

As I noted earlier, there are many little Windows 10 UIs that are missing in Windows 11 (at least for now), and the more I use Windows 11, the more I miss them. One obvious example: I guess I right-clicked the taskbar to run Task Manager more than I realized, since I keep doing that, and the option is gone. (So is virtually every other option that used to be there.) So I have to run it from Start.

Speaking of Start, the simplified new Start menu would probably be problematic for me if I actually used it a lot. I didn’t try to configure Start on my desktop PC, but I’ve been playing around with it on this laptop, and it’s not very refined. It has space for 18 pinned apps, and there are more than 18 pinned by default, so you can swipe over to access the overflow. I started removing the pins I will never use, and now I only have 11 pins, and rather than reflowing and maybe giving more room to the Recommend section—which should be called Recents and only feature recent documents—it just leaves the space empty. That’s dumb.

Hey, it’s early, I know. And it’s highly likely that we’ll learn about more features next week and that further refinements and fixes are on the way. It’s all good. But that’s what I’ve noticed so far.

Getting To Know the Upcoming WordPress 5.8 Template Editor