Datacenter on the Moon 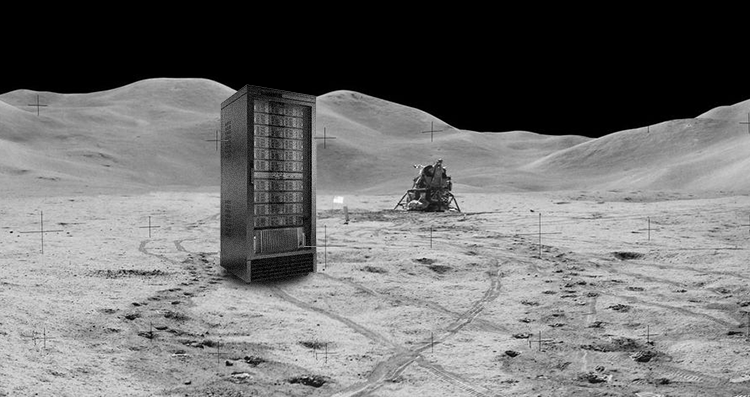 A data center could be built on the Moon before the end of the decade as part of an international effort to develop a permanent base on our nearest neighbor.

As part of the wider NASA Artemis Moon program, Italian space agency ASI turned to Thales Alenia Space to study 16 design concepts to support a human presence on the Moon, including a data center.

We caught up with Eleonora Zeminiani, the head of the aerospace company’s Human Exploration New Initiatives division, to learn how a data center will be key to living on the Moon.

By 2024, NASA hopes to put the first woman and person of color on the Moon as part of the first phase of Artemis.

Then comes Phase 2, ‘sustainability,’ which is all about developing a long-term base. “This means that it is an element needed after 2025 and towards the end of the decade, because that is the timeframe in which consistent lunar infrastructure is currently planned for deployment and the Lunar Data Center will need to be there to serve it,” Zeminiani said.

The TAS project will investigate 16 key high-level architectural elements for future sustainable lunar exploration, Zeminiani explained. “For example, rovers, orbital platforms, surface habitats… Among these, one is the Lunar Data Center. In other words, we devoted one of the 16 study streams entirely to the Lunar Data Center.

“This is because we believe the LDC would be a major building block, able to serve most – if not all – of the other elements, and a game-changer in how we design and operate the other systems.”

The study will aim to investigate the architecture and design of the data center, with TAS and its partners proposing a few initial solutions, each “extremely different one from another.”

With the process still in its early days, TAS is first trying to determine what the LDC will need to be used for. “Then, based on those requirements we will be able to assess the different configurations to find the most promising one,” Zeminiani said.

Currently, lunar rovers and proposed systems use a mixture of on-board Edge compute and direct line of sight communication to Earth compute resources.

“However, our goal here is to look beyond that, to truly explore the case for an LDC,” Zeminiani explained.

“For many needs, relying on Earth-based computational resources is simply not acceptable, because communications with Earth are subject to a [noticeable] latency, one order of magnitude bigger than what we consider acceptable for today’s VoIP standards and two orders of magnitude bigger than the desired standard for low latency applications such as virtual machines and network storage.”

While it is closer than the Earth, the proposed Lunar Gateway is also not suitable for a data center, the company said. The space station expects to serve as a solar-powered communication hub, science laboratory, short-term habitation module, and holding area for robots.

“But it is not designed to sustain heavy computational demand from external clients,” Zeminiani said, who did not rule out putting the LDC in an orbital location of its own.

The study is set to be completed before the end of the year, with the company still to determine how much of the results will be made public.

If and when the facility is live on the Moon, it will connect to Nokia’s Moon-based cellular network. Both will form part of LunaNet, which we profiled in detail earlier this year.

“My goal with LunaNet is that it’ll be just as enabling as the Internet was to the Earth,” NASA project head David Israel explained to DCD. “Once this whole network-based mindset gets into the user side, the people planning the missions, then there’ll be all sorts of new types of missions and applications that just grow out of it.”