For a second week, the crypto market is being ruled by tweets from billionaire Elon Musk. 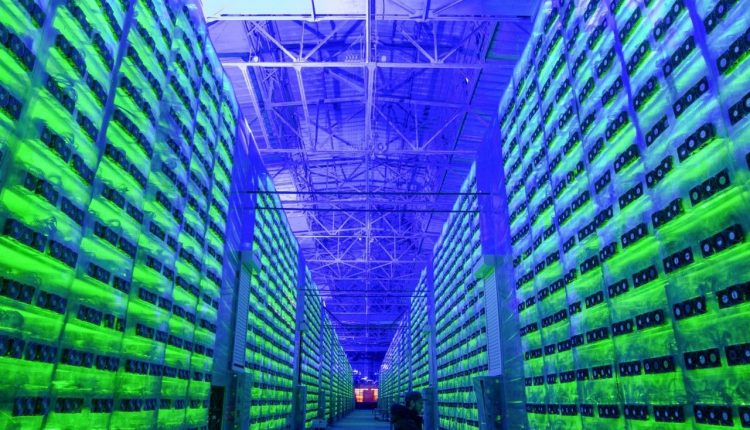 For a second week, the crypto market is being ruled by tweets from billionaire Elon Musk.

The Tesla chief sent Bitcoin rallying back above $45 000 on Monday after clarifying that the company hasn’t sold any holdings of the digital token. It’s the latest post to whipsaw prices across the industry and fuel speculation over just why the electric-car pioneer is issuing crypto missives on a daily basis on Twitter.

“He has to wake up to the reality that with his following, even single-worded tweets can move markets,” said Antoni Trenchev, managing partner and co-founder of Nexo in London, a crypto lender.

The drama started on Sunday after Musk sent a tweet that raised questions about whether Tesla might have already sold its stake. A user by the name of @CryptoWhale had speculated that Tesla had already sold its holdings, saying “With the amount of hate @elonmusk is getting, I wouldn’t blame him.” Musk responded to that tweet with a one-word post saying “Indeed.”

It was enough to shake the conviction of traders and Bitcoin sank 10% the weekend, hitting a fresh three-month low. Prices steadied on Monday, trading up 3% at $45 436 as of 11:12 a.m. in London. 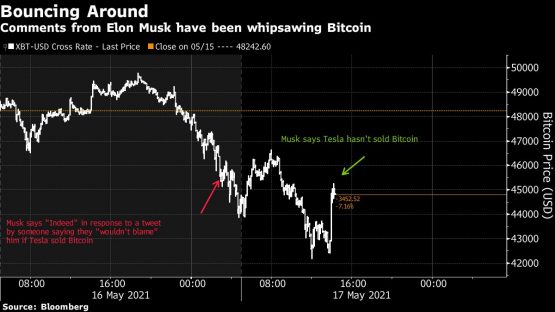 Musk’s involvement in crypto has been a major driver of the bull market this year, and the Tesla’s disclosure of a $1.5 billion stake brought legitimacy to virtual currencies. In April, Tesla’s earnings report showed the company had sold 10% of its Bitcoin holdings. Musk said on Twitter that Tesla was trying “to prove liquidity of Bitcoin as an alternative to holding cash on balance sheet.”

Traders and Tesla analysts have wondered aloud whether there’s anything serious behind Musk’s online musings. In the past two days, Musk has tweeted no fewer than eight times about crypto, often with emojis in response to jokes from his followers in between other posts about SpaceX and China’s mission to Mars. In response to another thread criticising his Bitcoin stance, Musk said: “Obnoxious threads like this make me want to go all in on Doge.”

Musk appears to have been “taking on all comers on Twitter over the weekend and caused some chunky gyrations across the coins,” Chris Weston, head of research at Pepperstone Group Ltd., wrote in a note.

“The actions of Elon Musk have certainly discredited him to a certain extent with both some traditional and digital asset investors,” said Vladimir Vishnevskiy, co-founder of St. Gotthard Fund Management, which invests in crypto as well as conventional assets. “He once again proved his erratic nature.”