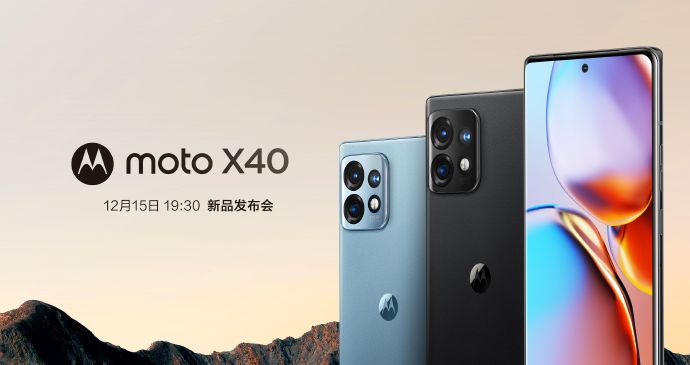 Motorola will be launching the Moto X40 smartphone later today. The device has already appeared in multiple leaks as well as on certification websites, revealing its specs and design. Now, Motorola has officially unveiled the design of the Moto X40 via a teaser. Let’s have a look.

The company shared the image via a Weibo post. It reveals that the early renders of the device were spot on, as the smartphone gas a triple camera unit along with a circular flash module housed inside a rectangular camera island. The edges of the smartphone are curved, and the same goes for the display as well. The teaser reveals two colors which we can expect at the launch event later today – Blue and Black.

A separate Weibo post by the brand also confirmed a bunch of speculated features regarding the Moto X40. According to the post, the Moto X40 will feature a 165Hz refresh rate display, IP68 waterproofing, MYUI 5.0 based on Android 13, and Pantone-approved back panel colors. The launch event starts at 7:30 China Standard Time. You can find out how to watch the event by following this link. Keep reading to find out all about the upcoming Moto X40.

The Snapdragon 8 Gen 2 CPU is housed inside, along with LPDDR5X RAM and UFS 4.0 storage. The device will run on Android 13 with the MyUI 5.0 custom skin. NFC, dual-band 5G, Bluetooth 5.3, USB Type C, twin speakers, Bluetooth 5.3, and an IP68 grade for water and dust protection are additional features. The smartphone had a 4,600mAh and a 5,000mAh battery pack when it was originally discovered on 3C and TENAA certification sites. These alternatives offer quick charging at 125W and 68W, respectively.

A 50-megapixel primary sensor, a 50-megapixel ultra-wide lens, and a 12-megapixel telephoto lens with 2x optical zoom are rumored to be included in the smartphone’s optics.

Imec to cooperate with Japan’s Rapidus on 2nm technology