A video released today shows the initial prototype of the TF-X next-generation fighter — which is being built by Turkish Aerospace Industries, or TUSAS — starting to take shape. The size of the jet makes an immediate impression, but the program will almost certainly face some significant hurdles, especially if Ankara wants to keep its target of service entry in the 2030s.

The first prototype of the TF-X — the program is known as Milli Muharip Ucak (MMU, or National Combat Aircraft) in Turkey — is now on the assembly line in Ankara, with the bulk of the fuselage and wings having been brought together. The twin engines are clearly still missing, as are the outward-canted tail fins and the horizontal stabilizers. While the cockpit canopy is seen installed, the cockpit itself is yet to receive its avionics and ejection seat. A placard attached to the spine of the jet reveals that the video was shot on November 21, during an official visit to the assembly line by members of the Turkish defense ministry, defense-industrial agency, and the Turkish Air Force. 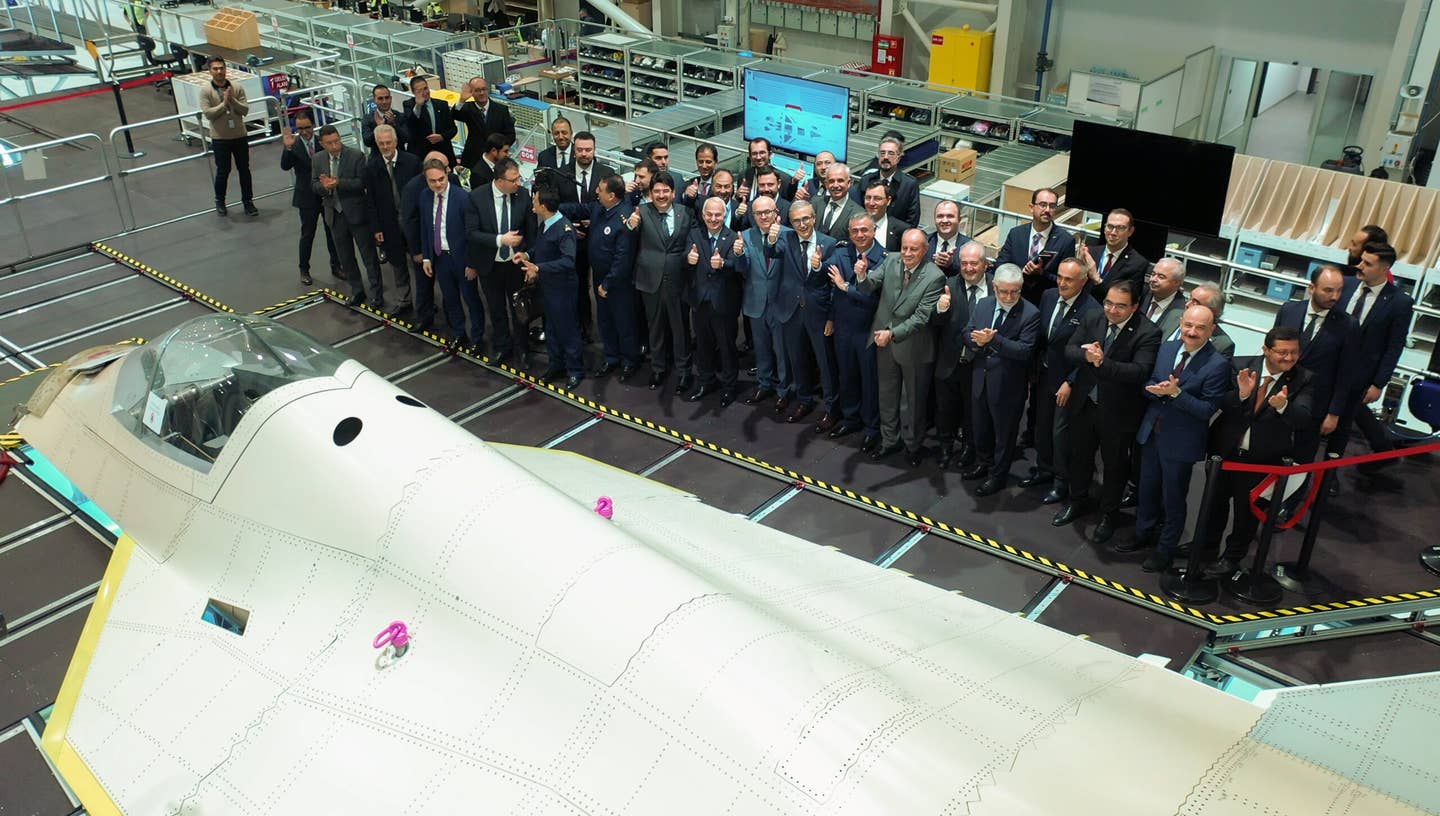 While slightly smaller than the U.S. Air Force’s F-22 Raptor, the TF-X is somewhat larger than the F-35 Joint Strike Fighter, with an overall length of 60 feet and a wingspan of 39 feet.

Overall, the timeline for the TF-X has slipped somewhat. When a full-size mock-up of the fighter was unveiled at the Paris Air Show in 2019, TUSAS President and CEO Temel Kotil said that the goal was to achieve a first flight with the prototype in 2025. At the same time, it was hoped that the first production examples would enter service as early as 2028.

Now, the maiden flight is reportedly scheduled to take place in 2025 or 2026 and the first production machines should start to be delivered to the Turkish Air Force in the early 2030s.

The TF-X program was originally launched in December 2010, with the aim of developing a homegrown fifth-generation combat aircraft. From the outset, it was to include a degree of stealth characteristics, advanced avionics, and a high level of performance.

In terms of stealth, it’s thought that the TF-X will not be in the same league as the F-22 or F-35, for example.

Conceptual design work on the new aircraft was undertaken between 2011 and 2013, leading to the full-scale development phase that began in 2016.

When the TF-X started life, however, the Turkish Air Force’s demand for a fifth-generation fighter was less urgent.

As a Level 3 partner in the Joint Strike Fighter program, Turkey was planning to acquire 100 F-35As, with more of the short takeoff and vertical landing (STOVL) F-35B variant likely headed to the Turkish Navy.

However, Turkey was kicked out of the Joint Strike Fighter program in 2019, after it refused to abandon plans to purchase Russian S-400 (SA-21 Growler) air defense systems, which the United States judged posed a significant security risk. The country was also heavily involved in the production of F-35 components, a process that has gradually been phased out.

The loss of its planned F-35s makes the TF-X program even more important, but it also brings other, related challenges. Turkey selected the General Electric F110 family of afterburning turbofans — specifically the F110-GE-129 or F110-GE-132 — to power the fighter, but the breakdown in U.S.-Turkish relations in general for a while made that seem a more remote prospect. More recently, the relationship has shown signs of improvement, including talk of a potential F-16 sale.

In its favor, the F110 has already been assembled under license in Turkey and its -100 and -129 variants power Turkish F-16C/Ds. While maintenance and logistics demands would be simplified, there remains no guarantee that the United States will support the supply of this powerplant for the TF-X.

Other engine options, should it come to pass, could include Rolls-Royce, which was originally turned down in favor of General Electric as the TF-X powerplant supplier. However, there have also been tensions between Turkey and the United Kingdom over the transfer of sensitive technology and intellectual property rights.

Obtaining a Russian engine has been suggested in the past, but the current war in Ukraine, related sanctions, and Moscow’s ostracization by the international community mean that’s now a very dim prospect. In the meantime, Turkey has also become established as a leading supplier of arms to Ukraine.

Finally, there is the hope of a domestically produced engine, which has previously been proposed for the TF-X, although the time that would be needed to have such a powerplant ready means it would unlikely be available before 2038.

This new reality has led to a rethinking of how the Turkish Air Force will be roughly 240 F-16C/D Fighting Falcons that make up the bulk of the combat fleet. At one time, it was planned that the F-35A would replace the aging F-4E-2020 Terminator jets first, before populating newly established fighter squadrons. This would have left the F-16s to be replaced by the new TF-X.

More F-16s would provide a stopgap until the TF-X can be fielded in numbers, the strained relationship between Ankara and Washington means that it’s by no means certain that such a deal will go ahead. Once again, it looks like the future of the Turkish Air Force is very much dependent on the TF-X becoming a success.

As well as the engine question, there is the issue of just how affordable the TF-X program will be. Developing a new fighter, stealthy or otherwise, is a major undertaking, and a very costly one — especially when a country decides to go it alone. It may well be that Turkey requires an injection of funds from foreign sales in order to keep the TF-X program on schedule, although there are there competitors out there, not least the F-35, but other options, including from China and South Korea.

As it stands, Turkey’s need for new fighter jets is only going to grow. It remains to be seen whether the TF-X program is able to meet that requirement — especially on the still-ambitious timeline that has been set out.
24
Share