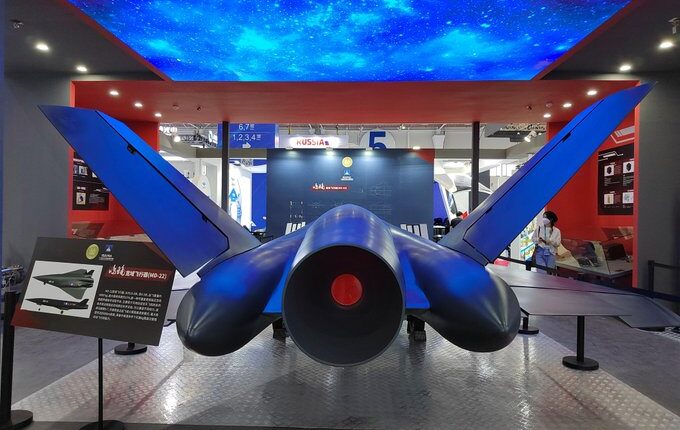 China will unveil an unmanned aircraft designed to test hypersonic technology this week. The new Chinese drone is called MD-22. Most of the technical features are not specified. Not only that, it is not the fact that the parameters of the drone will be disclosed at the presentation, which will take place within the framework of the air show in Zhuhai.

A mockup of the drone will be demonstrated at the air show. The dimensions of the final version will be 10.8 x 4.5 x 1.6 meters. However, it is possible that the drone will not look the same as shown in the pictures.

According to the information accessed from the banner placed near the aircraft, the UAV would mainly be used for a series of technical verification and in-situ scientific practice of proximity space shuttle aircraft.

It can be compatible with different thrusts, suitable for speeds between 0 to 7 Mach. The UAV could take off autonomously or by a rocket launch. In addition, it has 6G stable disk overload under medium and high-speed conditions.

No other information has been provided regarding the drone’s intended usage or whether it will also have a striker role.

The exhibition’s design is subject to change as the system is reportedly developing. It has been claimed that the MD-22 can be used to produce 6th-generation aircraft. However, these claims could not be independently corroborated by EurAsian Times.

Due to the scarcity of details about the platform, it would be premature to predict the duties delineated by this UAV. However, it indicates the pace at which China is developing its hypersonic technology ahead of its American and Russian counterparts.

On its part, the US has a similar initiative, the Stratolaunch Talon-A, which is primarily meant to support research and development, test, and evaluation activities linked to other hypersonic systems, including aircraft and missiles.

It is also converting its Block 20 and 30 RQ-4B Global Hawk aircraft into RangeHawks for its Skyrange initiative aimed at hypersonic testing in the United States.

China’s annual Zhuhai Air Show is an occasion for teasing and unveiling new technologies. The ongoing edition has seen some stunning visuals of China’s J-20 fighter jets flying in formation, their first-ever static ground exhibition, the Z-20 helicopters firing military flares, and a sneak peek into the sixth-generation concept.

In days leading up to the air show, Chinese state media reported that the country was readying to showcase an array of drones at the much-awaited event.

According to a Global Times report, China has decided to exhibit an extensive collection of drones, including the Wing Loong series armed drones, the CH-7 high-altitude long-endurance drone, and the WZ-8 high-altitude high-speed reconnaissance drone, among others. The air show also saw the debut of the Wing Loong-10 in an electronic warfare variant.

Not just that, China also debuted its FH-97A loyal wingman, a type of unmanned aerial vehicle (UAV) that can accompany manned aircraft and provide it with intelligence, information, and firepower assistance. Named FH-97A, the loyal wingman drone was exhibited to the general public for the first time.

Another UAV made an appearance at the air show, named the CS-5OOO. The aircraft had a flying wing design and was compared to the B-2 Bomber of the US Air Force on social media.

That said, even in a sea of drones showcased by China, the hypersonic testbed MD-22 stands out as a unique concept that would potentially aid China’s hypersonic capabilities against its rivals.