The vehicle could travel at 49 mph. 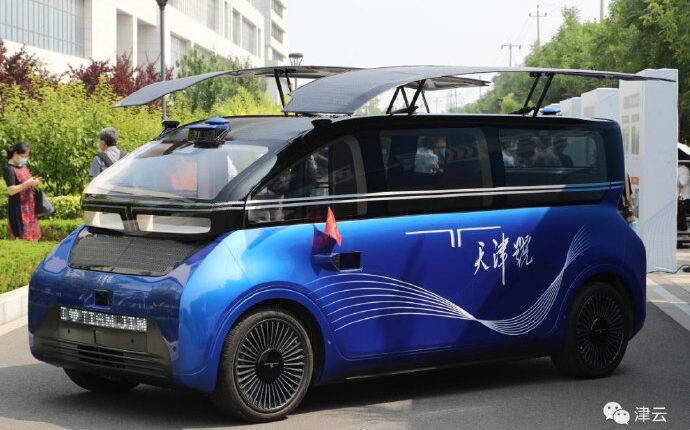 A multi-organizational collaborative effort in China has led to the development of the country’s first fully solar electric vehicle (SEV), Electrek reported. The vehicle was recently showcased at the World Intelligence Conference and is currently on tour in mainland China.

In the early 2000s, solar-powered cars were projects for university students to demonstrate their engineering skills. Any four-wheeler moving even an inch using solar energy alone would qualify for a successful project.

With the advent of battery-powered electric cars, building solar-powered cars have become more challenging. They have moved to a startup level, where engineers have begun to build improved and more real-life-looking prototypes of solar cars. Companies like Light Year have plans to roll out limited-edition vehicles powered only by the Sun.

However, the vehicle showcased in China makes these prototypes look like college projects once again.

Upfront is the driver’s area which is reduced to nothing more than a large touchscreen display and three buttons below it. Conspicuously missing in action is a steering wheel since the car is reportedly equipped with Level 4 autonomous driving, which we also see in the short clip.

How well does the system actually work is difficult to gauge in this clip, when the vehicle is driven on empty roads. Level 4 automation is rather difficult to achieve and the likes of Tesla and Waymo have been testing them for years.

The maximum speed that the vehicle is capable of is reportedly 49 mph (79.2 kph), which would be decent for a car that will likely end up being used in urban environments. Current regulations for automated driving require that vehicles only be operated in limited areas (geo-fencing) and are primarily aimed at ride-sharing, which probably explains why the navigator’s seat is absent.

Driven by the Sun

The solar module on the car occupies an area of 87 square feet (8.1 sq.m), far more than we have seen in any other solar vehicle. On sunny days, this can deliver a maximum energy output of 7.6kWh. Additionally, the vehicle is also equipped with a battery with an energy storage density of 330 Wh/kg.

According to the report, the car was assembled in five months by a collaboration of 42 companies and three universities. While the specifications aren’t something you would be excited about, the car packs 47 advanced technologies, some of which are available in top-tier automotive today.

Apart from the Level 4 autonomous driving and missing wheel, there isn’t much that seems top tier here. We would be interested in seeing what more the collaboration has in mind and how it plans to execute it at scale. For now, we can take these claims with a grain of salt.

With the solar-powered car currently on tour in China, we hope we will hear more about it soon.