In collaboration with Kajima Construction, researchers at Kyoto University, Japan have announced building an artificial space habitat and inter-planetary trains connecting the Earth, Moon, and Mars, as the world witnessed the dawn of a second Space Race.

In a press conference last week, the team announced its futuristic plans to develop the ‘Glass’ habitat living structure that replicates Earth’s gravity, terrain, and atmosphere to prevent the ‘weakening’ of the human musculoskeletal system in zero and low gravity environments. 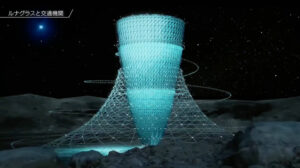 An illustration of ‘The Glass’ space habitat by Kyoto University

With the new space race becoming the defining moment of our times as the US revives its moon missions, China begins exploring Mars, Russia and China are planning a joint moon base, and humans starting to live outside Earth aren’t far off. However, living outside Earth’s gravity and the atmosphere inside our bodies and physical characteristics have evolved over millions of years brings risks.

Human bodies may get too used to the low gravity in outer space, with muscles, bones, and the overall exoskeletal structure not using their inherent ‘strength’ and ‘softening’ over time.

Raising children in outer space is even riskier, as its effects have not yet been studied, with the possibility that they may not be born successfully. Even if they do, they may not be able to stand on their own when they return to Earth. The team forecasts migration to the Moon and Mars by the latter half of the 21st century.

In a press conference last week, their illustrated presentation featured a large rotating cylindrical upright structure showing rivers, water, and park-like facilities for humans to live in when they are not outside the planet’s terrain.

It is essentially an inverted cone that rotates to create a centrifugal pull mimicking the effect of Earth’s actual gravity. At roughly 1,300 feet tall and with a radius of 328 feet, researchers are hoping to build a simplified prototype version by 2050. According to The Asahi Shimbun, a final version will take around a century to be built and operational.

The one on the moon will be called the ‘Lunaglass’ while the habitat on Mars will be called the ‘Marsglass.’ Elements from the Earth’s terrain and ecosystem will be “extracted” to be fed into the “core biome complex,” which indicates a multi-disciplinary field of geology, biology, botany, various physics, engineering, and climatology.

Diminishing bone density, muscle loss, and reduced eyesight have been some of the effects of spaceflight and prolonged life outside Earth on astronauts returning from the International Space Station (ISS). It explains astronauts’ rigorous exercise and strength training routines often seen in videos.

The biochemical and neurological effects also involve body fluids accumulating in the upper part of the body, often negatively impacting eyesight. Outer space medicine, therefore, branched out as a whole other niche medical specialization over the last five decades.

The group’s plans are the stuff of science fiction. They also envision an interplanetary transportation system, called the ‘Hexatrack,’ that maintains a gravity of 1G even during long-distance travel to mitigate the effects of prolonged exposure to low gravity.

Hexacapsules are capsules with a hexagonal shape, and a moving device is prepared for the central part.

The large capsule has a structure in which the outer frame ‘floats,’ possibly using electromagnetic technology, seen on Maglev trains in Germany and China.

The movement of people from each vehicle uses the radial central axis. The movement between Moon and Mars maintains 1G (radius of 30 meters, 5.5 rounds/minute).

The track’s station on the Earth is dubbed the Terra Station, while a train moving on a standard gauge track with six coaches will be called the Space Express.

The leading and the trailing cars will have rocket boosters strapped to them to accelerate and decelerate in space while also serving to escape the gravitational pull of each planet and remain outside the atmosphere. While traveling on planets with an atmosphere, its wings unfold. It will operate on the moon and Mars as a high-speed railway on gauge, connecting the base cities.

Yosuke Yamashiki, the Director of SIC Manned Cosmology Research Center and Graduate School of Advanced Integrated Studies at Kyoto University, says that while the United States and the United Arab Emirates are actively pushing for the migration to Mars, he wanted Japan to table a completely different, “original idea independently.”

“Through discussions over the past few years, these three pillars that we propose this time are core technologies that are not in the development plans of other countries and are indispensable for ensuring the realization of human space colonization in the future,” he added.

There is another phone with the new giant 1-inch Sony camera sensor, and it’s not Chinese