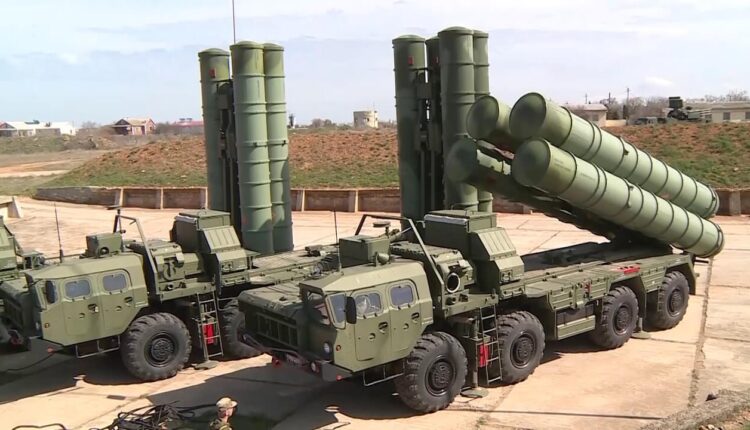 Ukraine has claimed that Russia is now using its S-300 long-range surface-to-air missiles to attack land targets in Ukraine. The assertion, from the governor of the Mykolaiv Oblast, in southern Ukraine, suggests that Russia’s shortage of standoff weapons to attack land targets may well be worse than thought. The S-300 apparently does possess a little-known surface-to-surface capability.

Using the Telegram instant messaging service, Vitaly Kim, the governor of Mykolaiv Oblast, introduced the claim about the S-300, without specifying which versions are being used. Russia operates both the S-300P series on 8×8 wheeled chassis and the S-300V that uses a tracked chassis, and which offers an improved anti-ballistic missile capability. Both S-300P and S-300V series have been used by Russia (and also by Ukraine) in the Ukrainian war. These systems can fire ar variety of missiles.

Kim says that 12 missiles were fired by S-300s in a land attack role, targeting Mykolaiv Oblast, but he also notes that, despite the missiles being retrofitted with GPS guidance, they remain inaccurate.

The ability of the S-300 to engage targets on the ground has barely been reported in Western sources although an article that was published by the Belarusian Naviny news website in 2011 provides details.

According to this account, the Belarusian military tested its S-300 air defense systems against “important ground targets on the territory of a potential enemy” during an exercise in the same year. Belarusian officials claimed this was the first time that the country had experimented with this capability, which allows an “adapted … S-300 to destroy ground targets tens of kilometers from firing positions.”

However, as the article points out, “The possibility of hitting stationary ground targets was originally incorporated by the developers into the design of the S-300 air defense system adopted for service in 1979, as well as all its subsequent modifications.”

At the time, Belarus was known to use the S-300PS (NATO codename SA-10 Grumble) version of the system, introduced in the mid-1980s and which includes 5V55R missiles which a maximum engagement range of up to 56 miles against aerial targets. The Naviny article states that the maximum range of the (Belarusian) S-300 against ground targets is 75 miles, being limited by the guidance system, rather than the propulsion.

The missiles used in the S-300P series have inertial guidance systems with updates provided by radio link and, for the terminal phase, semi-active radar homing. It’s highly unlikely that, under most circumstances, it would be possible to illuminate a ground or surface target for the missile to home in on, but the inertial guidance and radio updates presumably provide enough accuracy to hit larger, area targets. This is not unheard of. The giant Talos naval surface-to-air missile also had a secondary land and surface attack capability for area targets, but it used a nuclear warhead for that application.

Furthermore, the missile would also be hard to defend against, with its high-speed and probable quasi-ballistic missile mode of attack.

Interestingly, the Naviny article states that, in the past, including in Soviet times, the cost of each S-300 missile round made it prohibitively expensive to practice using them against ground targets. At the same time, there were many more tactical surface-to-surface missiles available. Now, however, with the S-300PS being replaced in Russian service, including by the more advanced S-400, it’s become possible to test them for land attack role — a mission in which they are reportedly now also being used in combat.

Earlier in 2011, regiments from the Russian Air Force and Air Defense Forces from Eastern Military District reportedly undertook maneuvers during which five S-300 missiles were fired at a simulated “unknown armed formation,” which was completely destroyed.

As to why Russia is apparently using S-300 to attack ground targets in Ukraine now, that is somewhat unclear. On the one hand, it would seem to point to a lack of more suitable weaponry, including precision-guided standoff missiles. Indeed, part of the reason for the Russian military practicing using the S-300 for land attack in recent years is the relative scarcity of tactical surface-to-surface missiles, at least compared with Cold War levels.

From early on in the war in Ukraine, meanwhile, there have been reports, including from the Pentagon, that Russia may well be running low on its stocks of standoff missiles, in particular the more modern land attack cruise missiles launched from bombers as well as from surface warships, submarines, and ground launchers.

into action against land targets at least partially on practical grounds. If a target presents itself that is out of the range of standard artillery and an S-300 air defense battery is within range, it could well make sense to engage it by these means, rather than calling in a more expensive cruise missile strike. Not only would the land-attack cruise missile have to travel further to hit the target, but it would also do so by flying more slowly, and would take much longer to bring into action in the first place.

Russia’s Iskander-M short-range ballistic missiles are also weapons that are likely in dwindling supply and are of high importance, with maintaining a minimum stockpile being a strategic issue. Most importantly, the S-300 has also been around for so long that there is likely a surplus of aging rounds that would be better used on static ground targets than in high-risk air defense situations.

If Russia has indeed modified these weapons with GPS guidance, it would point to an even more elaborate, long-term initiative to use them as quasi-ballistic missiles. Doing so would likely improve accuracy by a significant margin, but still may not be anywhere as reliably accurate as a purpose-built system. Their blast-fragmentation warheads are also optimized to take down aircraft, not strike land targets.

At this stage, we can’t say for sure that Russia is employing S-300s in a land attack capacity as alleged, but it certainly appears possible and would make sense bearing in mind the depleted stocks of other more appropriate weapons. We will continue to watch this story and bring you any developments as they emerge.