Where will NASA set up its moon base? 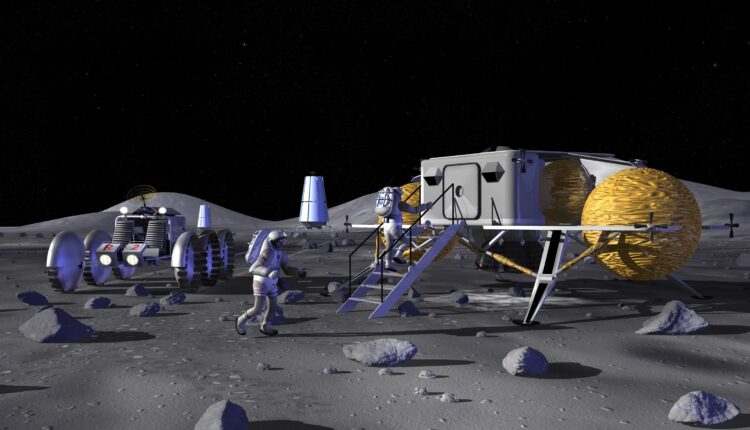 NASA aims to set up a crewed outpost near the moon is south pole, calling it “our first foothold on the lunar frontier.”

The ingredients for that encampment, known as Artemis Base Camp, are an unpressurized rover to transport suited astronauts around the site; a pressurized rover to enable long-duration treks away from the outpost; and the surface habitat itself, which will be capable of housing four humans at a time.

This home-away-from-home demands a lot of infrastructure such as communications, power, radiation shielding, waste disposal and storage space, too. All of these domicile niceties, NASA planners say, are requirements for a sustained human presence on the moon that can be revisited and built upon over the coming decades.

Mission planners are looking for spots that feature easy access to solar energy, good communication linkage with Earth and modest slopes that allow access to nearby permanently shadowed regions, or PSRs in space speak. Researchers believe that PSRs likely contain water ice deposits. That resource could be extracted and processed into usable items, such as oxygen, water and rocket propellant.

However, what is the distribution and abundance of water ice within those spots? Is there enough of it, and is it accessible enough, for PSRs to be usable “watering holes?” Those are questions that researchers still need to answer.

There has been stimulating work done recently on finding an address for Artemis Base Camp, but researchers are trying to home in on sites that offer the best combination of attributes.

Brown and colleagues recently pointed out the resource potential of lunar PSRs, publishing their findings in a May issue of the journal Icarus.

They compiled observations indicating the presence of water and other “volatile” molecules from 10 remotely sensed datasets in 65 PSRs to estimate the locations and mass of water ice deposits. Their assessment provides a PSR volatile ranking, grade and tonnage estimate that makes it possible to prioritize areas in which to potentially mine water ice.

“Our work provides a relative valuation of resources at PSRs and is intended as a tool to guide future missions, particularly orbital ones,” Brown told Space.com. “We highlighted PSRs that are likely the most resource-rich; however, they are not easily accessible.”

There’s increasing need to collect more orbital data about the form and structure of PSRs, the horizontal and vertical distribution of volatiles and how accessible these resources are. It’s also important to advance and develop technology that can withstand the harsh environments of PSRs. Such information is required before landed missions go to these hard-to-get-to locations, Brown said.

She and her team identified eight PSRs with the highest resource potential. They determined that Faustini Crater, an impact feature that lies near the south pole of the moon, shows the strongest indication of water ice based on the research team’s criteria.

“While we identified PSRs in our paper that have suitable exploration conditions for in-situ measurements of volatiles, more orbital data, and robotic and human experience on the lunar surface, is needed before a landed mission can be confidently carried out in these harsh environments,” Brown said.

Ideal exploration conditions for sustained surface activities involve relatively flat surfaces, sunlight for power and line-of-sight communication with Earth — and all of these criteria need to be met within a practical distance of water ice deposits.

NASA and associated commercial groups have plans to send robotic landers to the south pole that will likely set down at the most inviting of spots: areas that are illuminated for most of the lunar year, Brown said.

“The Shackleton-de Gerlache Ridge area is a prime target,” Brown advised. This ridge between Shackleton and de-Gerlache craters is a highly illuminated region that has been identified as a potential landing area for future crewed and robotic landings by NASA, such as Artemis 3, the first crewed moon landing mission of the agency’s Artemis program. This touchdown, targeted for 2025 or 2026, will be the first crewed lunar landing since Apollo 17 in 1972.

The Shackleton-de Gerlache Ridge is ideal for future surface missions to the lunar poles, Brown said, “because of easy access to solar energy and Earth communications and close proximity to PSRs that can be explored for the presence of volatiles.”

The de Gerlache Crater rim is the most promising area when considering a landing site. This site has access to two PSRs with high potential grades, has adequate access to communication and nearby solar resources, and modest slopes traversing from illuminated terrain to presumed water ice deposits.

If all goes to plan, scientists will have lots of data about where to set up lunar research outposts, including a sprawling facility that China aims to develop with Russian help. China has a series of moon missions on the books in the coming years, leading up to building an International Lunar Research Station (ILRS) at the south pole of the moon in the 2030s. China and Russia have been blueprinting details of an ILRS since last year.

A number of NASA spacecraft missions are anticipated to add some essential details to the current understanding of the distribution of polar lunar volatiles. Missions to be flown soon include Luna-H Map, Lunar Flashlight, Lunar Ice Cube, the Volatiles Investigating Polar Exploration Rover, or VIPER, the Polar Resources Ice Mining Experiment 1, and Lunar Trailblazer.

Toss in for good measure the projected launch later this year of Russia’s Luna 25 mission, a robotic probe for research in the moon’s south polar region. Luna 25 will kick-start a series of new Luna missions in the not-too-distant future, if all goes according to plan.

Another upcoming tool is ShadowCam, a NASA instrument developed by ASU that will fly onboard the Korea Pathfinder Lunar Orbiter, which was recently named Danuri. Danuri is the first lunar mission of the Korean Aerospace Research Institute and is slated for an early August launch atop a SpaceX Falcon 9 rocket.

ShadowCam will gauge details within PSRs. It was designed to be over 200 times more sensitive than previous imagers, like the Narrow Angle Camera toted by LRO.

Mark Robinson from ASU is the principal investigator for both LROC and ShadowCam. The latter instrument is designed to characterize the distribution and abundance of water ice at the lunar poles.

One of the science objectives of the mission is to provide detailed hazard and trafficability information within PSRs to help facilitate future landed polar exploration. “The ShadowCam dataset, along with other future orbital datasets, will be invaluable in identifying future landed missions and human return to the moon,” ASU’s Brown said. Those datasets will be needed to guide the decision on where to set up lunar resource outposts, she added.

“There are so many planned orbital and landed missions to the south pole that I am finding it hard to keep up!” Brown said. “But yes, we will be getting an extraordinary amount of data about the lunar poles and PSRs in the coming decade, and I am very excited about that.”

“There is a broad consensus that a south polar locality in near-permanent sunlight close to PSRs will be the preferred locality,” Ian Crawford, a professor of planetary science and astrobiology at Birkbeck College in London, told Space.com.

There are multiple scientific reasons for wishing to resume the robotic and human exploration of the moon, ranging from lunar geology to astrobiology, Crawford said. “Ideally, this will include the eventual establishment of Antarctic-style research stations to support large-scale exploration activities,” he said.

Crawford said he hopes that competition for limited resources at the moon’s south pole between the U.S. and its Artemis partners and the Chinese-Russian ILRS effort can be dodged. “I think a new space race should be avoided if possible, although the prospects for cooperation among major spacefaring nations isn’t looking very promising at present.”

Opportunities for cooperation, never strong, have clearly been greatly set back recently, Crawford said. “Despite present difficulties, I still think that what we really should aspire to is a fully international moon base. My view on this hasn’t really changed in 20 years.”

Leonard David is author of the book “Moon Rush: The New Space Race,” published by National Geographic in May 2019.