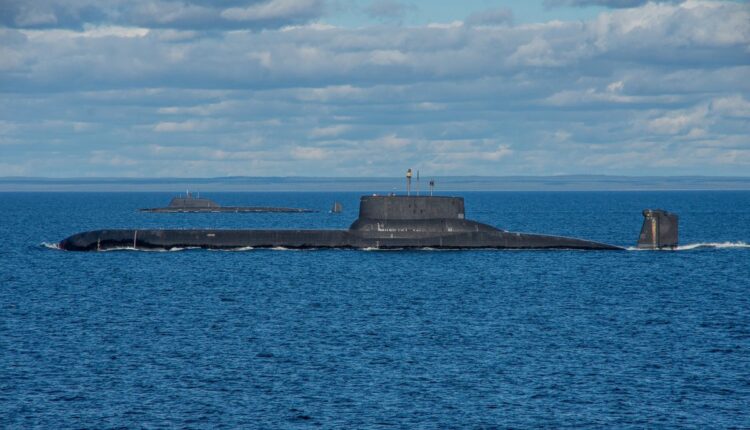 Since the onset of Russian military operations against Ukraine, the Black Sea has played host to several attacks on targets deep inside the territory of Ukraine. Russia has launched many strikes using its Kalibr missiles from its submarines in the Black Sea.

Ukraine, too, recently launched missile strikes against three Russian gas rigs in the Black Sea, causing a massive blow to the invading Navy. According to the Ukrainian sources, the gas rigs were Russian military garrisons and stored equipment used for attacking their beleaguered country.

Meanwhile, a significant development concerning Russia’s largest submarines has been observed in the White Sea — several miles away from the theatre of war and close to Russia’s northwestern coast.

On June 26, Naval Analyst HI Sutton citing Open Source Intelligence revealed that the two largest submarines in the world- the Belgorod (K-239) and the Dmitriy Donskoi (TK-208) of the Typhoon Class were caught on the surface of the White Sea.

He further claimed that these subs are ginormous, much bigger than anything in the West, even the US Navy’s Ohio Class which is US Navy’s prized possession and a nuclear-powered submarine in the American fleet. However, it was not immediately clear why the two submarines appeared suddenly in the White Sea.

The White Sea is a southern inlet of the Barents Sea on Russia’s northwest coast. It is pertinent to note that the White Sea serves as a vital conduit between Russia’s Far Eastern ports and the economically vibrant regions of northwest Russia and other nations.

The White Sea-Baltic Canal, which flows into Lake Onega, connects it to the waterway network of European Russia.

Although the exact purpose of the two submarines floating in the White Sea is unknown, there are speculations that the Dmitry Donskoi was assisting the sea trials of a submarine — potentially the Belgorod. EurAsian Times could not independently verify this information.

“White Sea is Russia’s backyard, close to Finland and Sweden. It is possible that the two submarines were headed to the Barents Sea via the White Sea-Baltic Canal for some routine operation. Since the canal is not too deep, the submarines might have had to surface and transit”, according to military analyst Joseph P Chacko.

When asked whether the submarines had anything to do with soon-to-be NATO members Finland and Sweden, Chacko said, “These are strategic submarines that only use long-range ballistic missiles. To guard against the Nordics, the Iskander missile would suffice. So, I think it was just Russia guarding its perimeter against the US or undertaking a routine exercise.”

The Dmitry Donskoi was reportedly first sighted in the White Sea last week, on June 17 or 18. However, the appearance of the Belgorod-class evokes interest as the mammoth submarine is still on trial, according to Sutton.

The submarine, which is 175 meters long — nearly 600 feet — has been operational since 1980 and has undergone substantial upgrades throughout its existence. The ship has a crew of about 160 people and has a displacement of 48,000 tons.

The submarine can unleash a wave of missiles at targeted ships and cause significant damage when unchallenged, thanks to its powerful missile artillery. These submarines can also relatively covertly launch massive ballistic missiles from anywhere in the world.

Even though it is the last serving submarine of its class, with all other sister ships decommissioned over the years, Russian state news agency TASS reported that the Dmitry Donskoi would remain in service for the next five years at least. It was the biggest submarine in the world until the Belgorod, also sighted in the White Sea.

The Belgorod is a sizable, stealthy, specially designed nuclear vessel that was constructed from the unfinished hull of an Oscar-II cruise missile submarine. Everything from underwater drones like the Klavesin-2R to Losharik miniature submarines is believed to be compatible.

The ship’s hull was extended to a length of around 184 meters (604 feet), and its displacement was increased to 30,000 tons (when submerged), which was less than half that of the Ohio-class ballistic missile submarines used by the US Navy.

According to an article by HI Sutton, Belgorod will be manned by Russian sailors but run by the covert Main Directorate Deep-Sea Research company GUGI.

He also stated that although the submarine has undergone considerable renovations and may even have some of the newest technology, she is still an earlier generation of the submarine and is probably less stealthy than the most recent generations of submarines.

It was earlier revealed that the artificial intelligence-guided nuclear-tipped Poseidon torpedoes will be integrated into the 14,700-ton submarine.

EurAsian Times had earlier reported that it would most likely be used in the Pacific fleet, which might endanger US naval bases on the West Coast and significant cities like Los Angeles. Additionally, its underground construction and inexhaustible nuclear power could move undetected to any region.

The Belgorod submarine was first put to sea trials in June of last year, and while some reports have indicated that the tests were to end soon, the naval analyst says they are continuing for now.