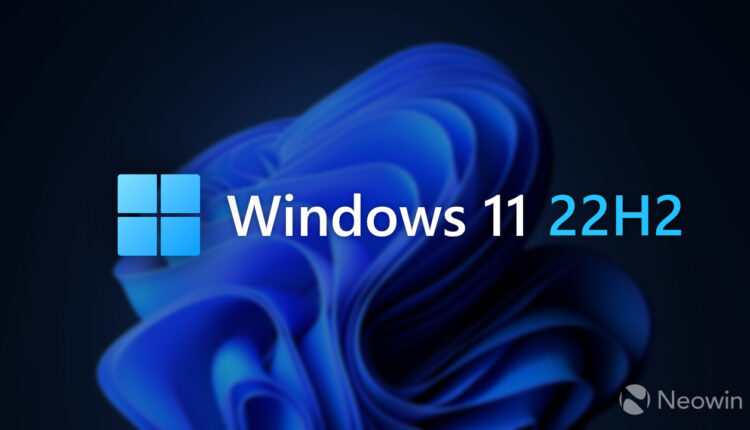 Although we are months away from the release date, Microsoft is done adding the new features and changes for Windows 11 22H2, and the intended final version of the update is already available in the Release Preview Channel of the Windows Insider Program.

In this release, you can expect new features like Live Captions and Voice Access. It will also introduce an updated version of File Explorer that brings support for tabs and a redesigned navigation pane, a new way to span applications on the screen with drag and drop Snap layouts flyout, and redesigned version of Task Manager. Furthermore, you will find many visual updates for legacy elements and more.

The final version of Windows 11 22H2 has been available since June 7, 2022, but only as a preview in the Release Preview Channel. The feature update is still expected to launch in October 2022, but there’s not an official release date yet. The update will be offered as a free upgrade for computers already running the original version.

Since this is a new version of Windows, it’ll require complete reinstallation, whether you use Windows Update or Installation Assistant. However, files, settings, and apps will be kept during the upgrade process.

As usual, Microsoft will use a gradual and controlled rollout, meaning that it will take time for compatible devices to receive the update, and only those computers known to have a good upgrade experience will receive version 22H2 immediately. Also, the company will continue to place temporary blocks on tablets, laptops, and desktops that may have compatibility issues.

The feature update will focus primarily on updating the user interface to make it more consistent with the new design language. For example, Windows 11 22H2 now has an updated flyout design for the system hardware indicators, including volume, brightness, camera, and airplane mode.

Also, title bars for legacy components like the “Run” dialog now use the Mica transparent material to add some consistency between the modern and legacy elements.

Furthermore, you will find a new Print Queue app and Print dialog that align with the new design language.

Some of the previously removed features are coming back. An example of this is the ability to drag and drop files to the Taskbar to open the file with the running application. You can also pin apps from the Start menu to the Taskbar.

The Start menu gets folders to better organize apps in the “Pinned” area, and you can now change the layouts of the “Recommended” section to show more pins or suggestions.

As part of the Snap assist experience, you can now drag a window to the top of the screen to bring up the new Snap layouts drop-down menu to create a new layout.

File Explorer is getting some major improvements, including support for tabs and redesigned navigation pane, previews for folders, and faster access to the legacy context menu with the “Shift + right-click” action. Also, you find a new OneDrive integration that gives you a little more control of the storage usage, and you can now quickly confirm that syncing is working.

The Settings app is also getting a bunch of updates. Microsoft is updating several areas of the app to align with the design language. You will find these changes on the “Storage spaces” settings, “Time & language” section, “Focus” page, and in the “Windows Update” section, you will now find a new page to uninstall updates.

In a continued effort to keep modernizing the built-in apps and tools, version 22H2 also comes with a redesigned Task Manager that matches the design style available on Windows 11 with rounded corners, and mica material that shines the desktop background through the app’s frame, and new iconography. However, the app retains the familiar experience as the legacy version but with modern improvements.

Microsoft is also updating the “Focus” feature and introducing a new “Do not disturb” feature to silence notification banners. You will also find new gestures for touch-enabled devices and more features and improvements.