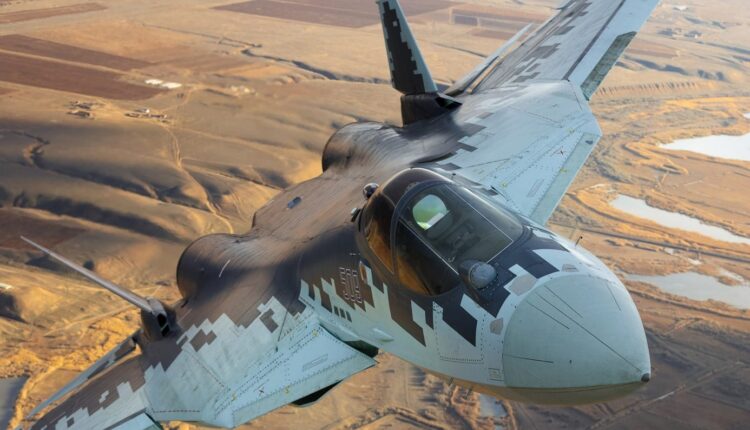 Why won’t Russia send its one and only stealth fighter, the Su-57 Felon, into the skies of Ukraine to fight? One simple reason is that Moscow has so few of them and might not be able to make many more due to many different factors: Moscow has long touted the capabilities of its Sukhoi Su-57 (NATO reporting name “Felon“) in recent years, while some Russian aviation experts have suggested its capabilities exceed those of even the United State Air Force’s F-22 Raptor and F-35 Lightning II.

“The Su-57 outshines them by now in terms of the amount and diversity of armament. On top of that, the latest solutions, such as the second pilot as a system that facilitates aircraft control and combat operations, a spherical all-around radar that ‘sees’ everything and cutting-edge electronic warfare systems aboard the Su-57 leave the U.S. rival far behind,” military expert Alexei Leonkov told TASS last November.

“For a long time, it had been believed that only F-22 and F-35 planes can be referred to as fifth-generation but these aircraft lack low radar signature and therefore can be shot down,” Leonkov continued. “The West would like to see us lag behind, but this is not the case. Clear progress can be seen in Russia with regard to both twin-and single-engine aircraft.”

If the Russian fifth-generation multirole aircraft was so capable, then why hasn’t it been employed in Ukraine?

One factor has likely been that Russia doesn’t have that many Su-57s in its arsenal. Though it was announced that the Russian Aerospace Forces would receive 22 Su-57 fighters by late 2024, it is believed that there still are fewer than 20 in service – and likely as few as a dozen that are operational. Due to its high costs, serial production has barely begun on the aircraft.

The single-seat, twin-engine multirole Su-57 combines the functions of an attack plane and a fighter jet while the use of composite materials and innovative technologies, along with the fighter’s aerodynamic configuration, was meant to ensure that it has a low level of radar and infrared signature. The use of composite materials has reduced the number of parts, but also the overall weight of the aircraft, according to Kremlin claims.

The Su-57 was developed by the Sukhoi Design Bureau and the Russian Aircraft Corporation as part of the Russian Air Force’s PAK FA fifth-generation fighter jet program, and it has become the first Russian aircraft to utilize stealth technology, while it was further designed to have supercruise, supermaneuverability, and advanced avionics to overcome attacks from the prior generation fighter aircraft, as well as ground and naval defenses. Development of the advanced Su-57 began in 2002, but the aircraft only took its first flight on January 29, 2010.

According to another report from the state news agency, at least one Sukhoi Su-57 Felon has been used to attack targets in Ukraine last month.

“The use of the Su-57 aircraft in Ukraine started two-three weeks after the start of the Special Operation. The aircraft are working outside of the zone of activity of enemy’s air defenses. They [the aircraft] are using missiles,” a source in the Russian military reportedly told TASS.

However, there has been no confirmation that the Felon has been deployed to Ukraine, but there have been numerous reports of sightings as well as unverified footage of the aircraft. It is also telling that the source said the aircraft was only operating outside of Ukraine’s air defenses, suggesting that perhaps there isn’t all that much confidence in its capabilities.

Now a Senior Editor for 1945, Peter Suciu is a Michigan-based writer who has contributed to more than four dozen magazines, newspapers and websites. He regularly writes about military hardware, and is the author of several books on military headgear including A Gallery of Military Headdress, which is available on Amazon.com. Peter is also a Contributing Writer for Forbes.