Visualizing the World’s Most Popular Religions 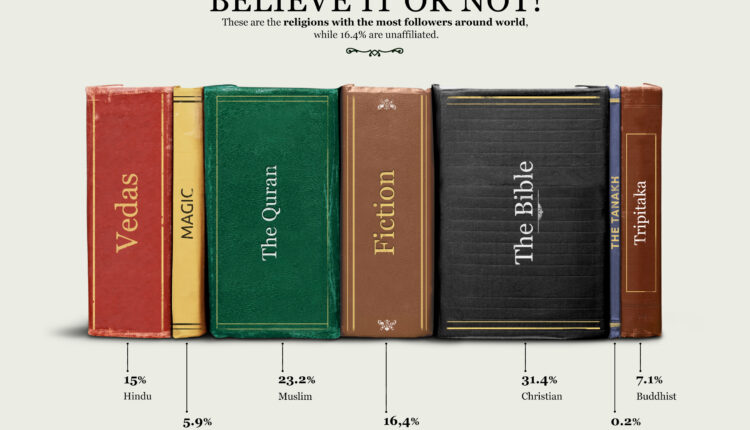 According to some estimates, there are over 4,000 religions, faiths groups, and denominations that exist around the world today. Researchers and academics generally categorize the world’s religions into five major groups: Christianity, Islam, Buddhism, Hinduism, and Judaism.

This graphic by Chit Chart visualizes the most popular religion  around the world, using the latest available data from Index Mundi’s world demographics.

In addition to the five major religious groups, the graphic includes two more categories: one for a collective of Folk religions and another for people who are unaffiliated with a religion.

The Religions with the Most Followers

Although the number of people who follow a religion has decreased in recent decades, 82.8% of the global population still identifies with one of the world’s major religion.

Here’s a breakdown of the most popular religions, ranked by their following as a percentage of the world’s population:

Christianity has the largest following with approximately 31% of the global population. Muslims make up the second-largest religious group, accounting for 23.2% of the world’s population.

The World’s Religions from Oldest to Newest

Hinduism is considered the oldest religion in the world, originating in the Indus River Valley (modern-day Pakistan) circa 7000 BCE.

While Judaism came after Hinduism, it is thought to be the oldest of the three monotheistic Abrahamic faiths, making it older than Christianity and Islam.

It began circa 2000 BCE in the Southern Levant (modern-day Israel, Palestine, and Jordan). By contrast, Christianity was founded in the 1st century and began as a movement within Judaism.

Scholars typically date the creation of Islam to the 7th century, making it the youngest of the world’s major religions on this list. Islam was established in Mecca (modern-day Saudi-Arabia).

One religion that’s not included on this list is Sikhism. Founded in the late 15th century, it’s relatively new, especially compared to other religions like Hinduism or Judaism. Yet, despite being new, Sikhism has a large following—according to some estimates, there are over 25 million Sikhs worldwide.

What are Folk Religions?

A folk religion is defined as an ethnic or cultural practice that exists outside the theological doctrine of organized religions.

Since Folk religion are less institutionalized, they are especially challenging to measure and often excluded from surveys. With that said, an estimated 5.9% of the global population (approximately 430 million people) practice a Folk religion.

While Islam is the newest of the big five religions, it’s currently the world’s fastest-growing one too. For context, here’s the estimated percent change among the seven religion categories, between 2015 and 2060:

Islam’s rapid growth means it may surpass Christianity as the world’s largest religion within the next half-century. What’s causing this growth?

According to Pew Research Center, the main reason is simply demographics—on average, Muslim women have 2.9 children, which the average of all non-Muslims is 2.2.

Muslims are also concentrated in Africa and the Middle East, the two region predicted to have the highest population increases in the next few decades.

China prepares to unveil the H-20 nuclear bomber, which will compete with the…