In a rare feat, Space Exploration Technologies Corporation (SpaceX) was able to capture live video of the first stage of its Falcon 9 rocket landing on a drone ship off of the Florida coast. SpaceX’s latest mission saw the company launch a satellite for communications services provider Globalstar from Florida, and as is always the case, the launch was followed by the iconic Falcon 9 returning to Earth and successfully landing on its ‘feet’.

However, before the Globalstar mission, SpaceX was able to capture high resolution footage of the Falcon 9’s landing for a Starlink launch. Starlink is SpaceX’s low Earth orbit satellite internet service, and usually, the company’s cameras placed on its ship generally cut off just as the rocket lands, but for the Starlink mission, the live feed and a clip shared by SpaceX, later on, showed the rocket landing in all its glory.

Ever since it opened Starlink for public use in 2020, SpaceX has consistently expanded the service’s scope. Since then, the company has launched more than two thousand satellites into orbit, including those with laser connectivity, introduced new user terminals and expanded coverage to airplanes and recreational vehicles.

As part of Starlink’s ability to be used by mobile vehicles, SpaceX also uses the service on its drone ships for Falcon 9 landings. It uses Starlink to broadcast live footage, which is then streamed to viewers on YouTube.

The Starlink launch took place last week and it saw the Falcon 9 take off from the National Aeronautics and Space Administration’s (NASA) Kennedy Space Center in Florida. Since the mission took place in the afternoon, the drone ship was also well lit by the Sun, which then enabled the cameras to capture a crystal clear view of the 187 feet tall rocket landing. 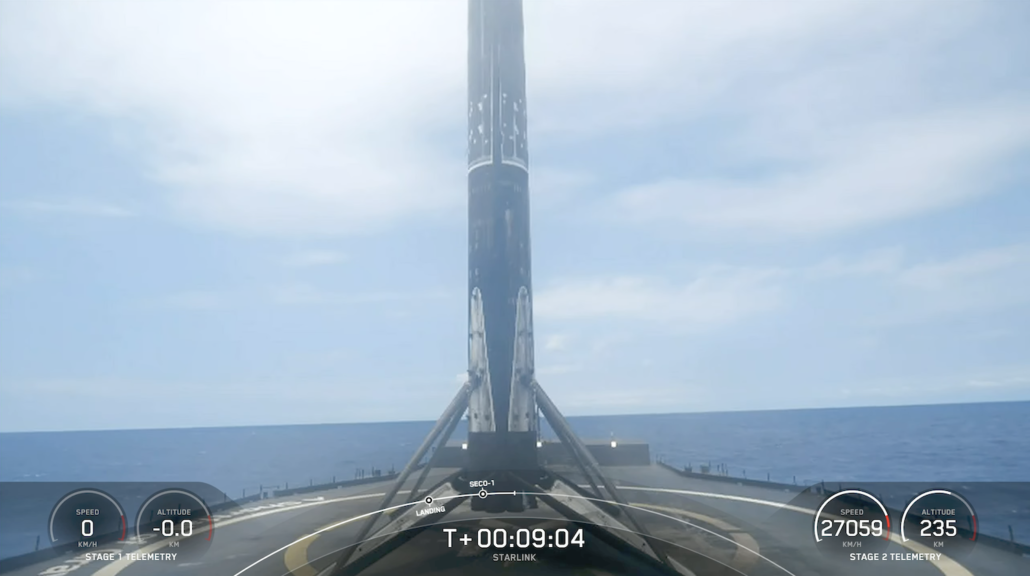 The landing marked another key milestone for SpaceX, which has disrupted the aerospace industry by landing its first stage rocket boosters. It was marked the first century of a reused rocket landing for the company since it was founded by Musk in 2002.

Musk also confirmed that the video footage was the best that his company had captured to date, and credited Starlink for the high quality result.

Through Starlink, Musk’s company aims to not only provide low cost internet to consumers, but will also target several industries such as finance, aviation, and maritime shipping. All three have their unique environments and needs, and Starlink has the capabilities to serve each of them.

Users in the finance industry require high speed internet coverage that lets them receive information in real time from markets all over the globe. With lower latency due to low Earth orbit satellites and faster data transmission in space, several quarters believe that Starlink might be suited to this industry’s needs.

On the other hand, commercial aviation requires coverage at high altitudes, and since the Starlink satellites orbit the Earth much lower than spacecraft belonging to other internet providers, the service’s speed is significantly better. Finally, maritime shipping companies often need Internet access in the ocean, and with satellites, their needs are addressed as well.

SpaceX also plans to drastically increase the number of spacecraft that it puts into orbit with each launch through its Starship next generation launch vehicle platform. Starship is significantly larger than the Falcon 9 and it will let SpaceX launch hundreds of satellites in one go – at a time when the LEO satellite space is heating up with more companies entering the fray.