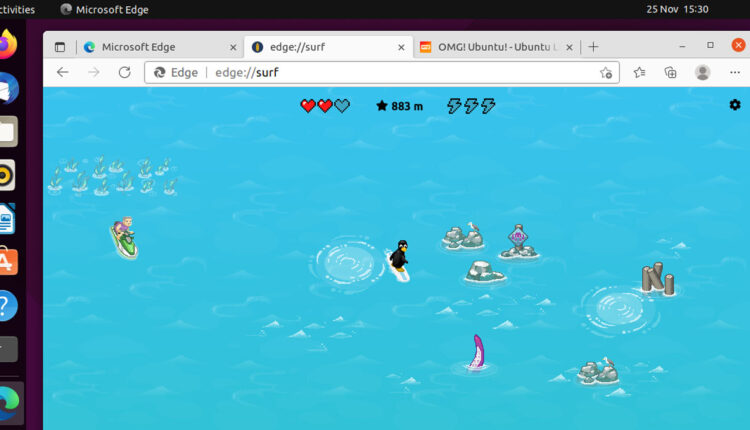 Did you know that Microsoft Edge for Linux has a hidden easter egg featuring Tux, the Linux mascot?

I certainly until didn’t until today — but it does!

You probably know about Google Chrome’s dino runner game. The game appears when is the browser detects no viable internet connection (though the game can be played at any time by going to chrome://dino in a new tab).

Well, Microsoft has its own boredom-buster built into its Edge browser. It comes the shape of an endless surf game inspired by the (classic) Windows game SkiFree. You can play the Edge surf game in stable (and beta and dev) builds of the browser on Windows, macOS, and Linux.

But there’s an exclusive playable character only available to Linux users: Tux!

Microsoft says the game “…challenges players to ride through the water while avoiding islands, fellow surfers, and other obstacles”. Use your keyboard arrow keys (or mouse) to swish left and right and avoid obstacles and sea monsters. Try to collect hearts and speed boosts, and navigate through gates to earn extra points.

Finally, if you find the game a tad tricky you can enable High visibility mode (to make hit boxes around objects easier to see) and/or Reduced speed mode (to slow down the speed of the game).

While the Edge surf game is unlikely to bag the browser any new fans, it’s a pretty cute addition for its fans, huh?

I just hope you’re better at it then I am!