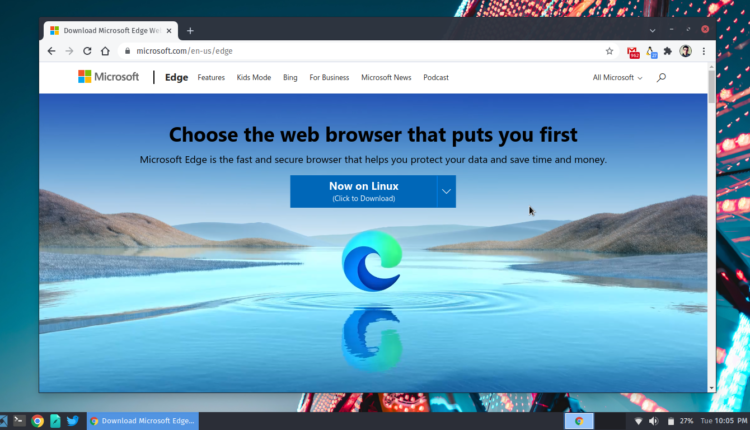 Microsoft Edge for Linux has reached stable status after spending more than a year in development.

The Chromium-based web browser made its Linux debut last October before hitting beta back in May. An official stable release was pegged for an indeterminate date in the future.

Now that date has arrived!

As first reported by Sophos, a stable version of Microsoft Edge for Linux is now available in the official Microsoft Edge Linux repos. It’s version 95, just like the latest stable release for Windows.

Microsoft has since made an official announcement of the arrival on the Edge blog, noting that “this milestone officially rounds out the full complement of major platforms served by Microsoft Edge through stable channel: Windows, Mac, iOS, Android, and now Linux.”.

Want to install it?

If already use Microsoft Edge dev or beta builds you can install the stable version from the repo you already have configured. Just open a new terminal and run the following command:

If you want a beta or dev build you can head over to the Microsoft Edge Insiders website to download a copy instead.

We’ve updated our guide on how to install Microsoft Edge on Ubuntu, Linux Mint, and other Ubuntu-based distros to walk through all the (very simple) steps needed.

Mozilla Firefox is arguably the most popular web browser with Linux fans, with Google Chrome or vanilla Chromium second place. So why use Edge?

Well, those who advocate for it say it’s fast, compatible, supports Chrome extensions, and has solid privacy settings (though some of those are enabled by default so be sure to configure things to your tastes if trying it out).

Honestly, nothing Microsoft can do will ever be universally loved by Linux users. But I think having the choice to not use their browser is better than having no choice to use it at all.

If you’re a fan of Edge so let me and other readers know what you like about it down in the comments!