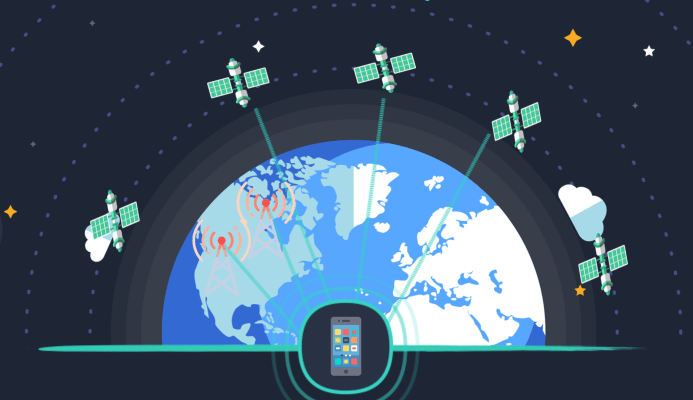 Not all who wander are lost – but sometimes their cell phone reception is.  That might change soon if a plan to project basic cell phone coverage to all parts of the globe comes to fruition.  Lynk has already proven it can use a typical smartphone to bound a standard SMS text message off a low-earth-orbiting satellite, and they don’t plan to stop there.

Formerly known as Ubiquitilink, Lynk was founded a few years ago by Nanoracks founder Charles Miller and his partners but came out of “stealth mode” as a start-up in 2019.  In 2020 they then used a satellite to send an SMS message from a typical smartphone, without requiring the fancy GPS locators and antennas needed by other, specially made satellite phones.

The company continued its success recently by demonstrating a “two-way” link this week using a newly launched satellite, its fifth, called “Shannon.” They’ve also proved it over multiple phones in numerous areas, including the UK, America, and the Bahamas.

Eventually, two-way communication means that the signal could eventually be used for voice calls rather than just sending messages in emergencies.  But for now, it will only take the form of text or meta-data rather than phone calls.  In the future, the company hopes to flesh out its constellation of satellites to allow faster data rates eventually.  As anyone who has lost reception can attest to, having any service at all is preferable to having none.

That is especially the case in remote, far-flung places like the Central African Republic and the Bahamas, both of which have phone carriers partnered with Lynk to help cover their vast, sparsely populated areas.  The company’s business model allows carriers to charge whatever they want for the service, and then Lynk itself will take a cut of that revenue.  Service will work similarly to existing cell phone networks, with messages being sent right away if there is a satellite overhead or waiting in an “Outbox” until there is one.

Unlike other cell phone network providers, Lynk stresses that the end-user is not their product; they are the company’s customers.  There are no plans to collect data on anyone using the service other than information needed for emergency communication, such as 911 messages.

The company had to overcome numerous technical hurdles, including atmospheric Doppler shifts and noise that made other experts believe the whole system was impossible to get to this point.  Having worked through those kinks and proven the technology, Lynk is now well placed to become the first option people in remote areas with regular cell phones have for connecting to the rest of the world.  It hopes to do so over the next few years.