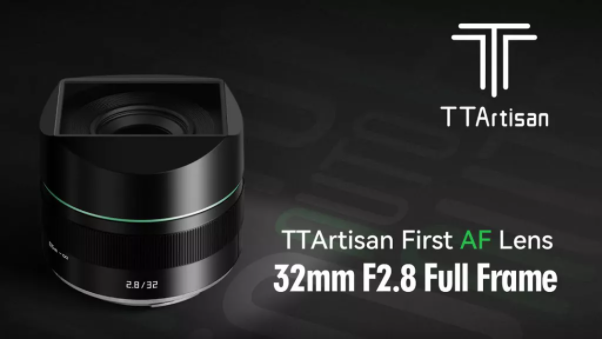 TTArtisan has made quite a name for itself as a company that sells good quality budget lenses, and recently announced a super affordable macro lens for Fujifilm X, Sony E and Micro Four Thirds. And now its new 32mm f/2.8 will be its first autofocus lens for full-frame users – great news for Canon EOS R6 or Nikon Z7 II users who are looking for more affordable lens options.

Based in Shenzhen, the global center of technology, it’s no wonder this Chinese lens manufacturer seems to be constantly releasing new products. Not only does TTArtisan make photography more affordable, it often releases lenses slightly different from what’s already available – such as the 32mm f/2.8 AF.

Although no specs have been released, the manufacturer has uploaded a product video onto its YouTube channel (embedded above). It’s not the most informative of watches but it gives you some idea of what the lens might look like on a camera and how fast the autofocus is.

Like the Fujifilm 35mm f/1.4, the TTArtisan 32mm f/2.8 comes with a square lens hood rather than the standard round one. From pictures posted on Sony Alpha Rumors, the lens looks small and sleek with a green metal band towards the front and a ridged focus ring.

There has been a recent rise in the number of lens manufacturers releasing budget lenses. Alongside TTArtisan there are brands such as Viltrox, Laowa and Samyang who often launch lenses that are a fraction of the cost of own-brand Canon/Nikon/Fujifilm lenses. Not only does this make photography more accessible which we think is great – it gives photographers the opportunity to try new styles of photography without spending too much.

The lens will be available to buy directly from the TTArtisan website or from its Amazon US store, but no details about price have been made available. However, with some of the best 35mm lenses already widely available, TTArtisan may find that pricing is where it will be most competitive.