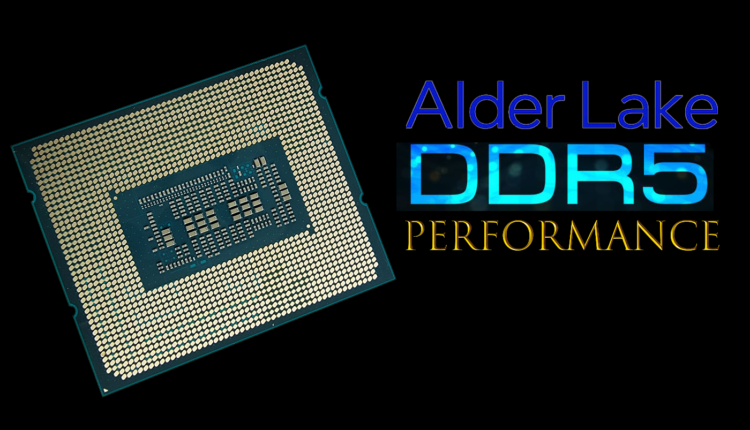 Share
Intel’s DDR5 implementation could be one of those cases where first to market does not necessarily translate to a huge advantage. The upcoming Alder Lake platform supports DDR5-4800 RAM natively, but everything beyond those specs seem to prove detrimental for gamers. A leaked test for the Alder Lake i5-12600K coupled with DDR5-6400 RAM shows how the new Gear 4 memory mode almost doubles the latency compared to that of a DDR4-2933 kit.
Alder Lake Desktop Gaming Laptop

Alder Lake will be Intel’s first platform to support DDR5 memory, giving it the edge over AMD, which is expected to add DDR5 support some time in 2022. Even though this should be a win for Intel, some new leaked DDR5 benchmarks conducted on the Alder Lake platform show that Intel’s solution may be suffering from “early adopter” problems and AMD not rushing to add DDR5 support could mean that Team Red is taking its time to fix said problems. The leaked DDR5 tests were posted along a RAM sale listing on a Chinese forum spotted by Twitter user nas32967961.

The exact name of the Alder Lake CPU used for the benchmark is not revealed but we can see that CPU-Z identifies 10 cores, so we are assuming this is the i5-12600K with 6 big cores and 4 little cores. As for the RAM kit, AIDA64 identifies it as a dual channel DDR5-6400 one with 40-40-85 CR2 timings. Apparently, the new Alder Lake platform introduces a Gear 4 memory mode in addition to the Gear 1 and Gear 2 modes that were added with the Rocket Lake platform launched earlier this year. Gear 1 offers a 1:1 ratio between the memory controller and the RAM frequencies, while Gear 2 reduces the memory controller speed by half in order to allow the RAM to reach higher frequencies, which, unfortunately, leads to increased latency.

According to Tom’s Hardware, upping the frequency from DDR4-2933 to DDR4-3200 adds around 7 ns of latency and this is detrimental to most games where the lower-clocked DDR4 still helps push 5% more fps. The upcoming Gear 4 mode is taking this latency difference to another level, as it further reduces the memory controller speed to ¼ of the RAM speed. It does allow the DDR5 memory to run at its rated speeds and offer impressive bandwidth figures (90 GB/s for DDR5-6400), but it also significantly ups the latency (92.5 ns), making it useless for gaming.

Since Alder Lake only supports DDR5-4800 natively, it is best to stick with these ratings for gaming and use faster ratings for applications that really benefit from the additional bandwidth. We knew DDR5 kits would come with higher latencies, yet Intel’s first implementation appears to amplify this problem and thus will most likely not be too appealing for gamers. It will be interesting to see if AMD’s first implementation could tackle this issue, seeing that the Zen 1 solutions introduced in 2017 had problems with high memory latencies.