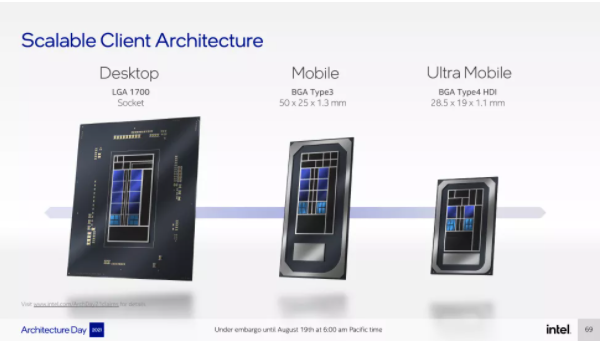 Intel’s Alder Lake chips are expected to arrive later this year, bringing performance boosts to the next generation of laptops and desktops. The chipmaker hasn’t been shy about the upcoming CPUs, and used its Architecture Day event to give us a taste of what to expect.

The headline feature is Alder Lake’s hybrid architecture, which will combine performance x86 cores with efficiency cores to deliver fast speeds and long endurance to the next fleet of laptops. If that sounds familiar, it’s because Apple uses a similar setup with the M1 processors in its MacBook Air and MacBook Pro.

What configurations we’ll see from Alder Lake remains a mystery, although Intel promised a full family of chips from 9W to 125W TDPs. In less jargony terms, these chips will arrive on the thinnest of ultra-portable notebooks up to the chunkiest gaming laptops and desktops.

If you’re in the market for a PC then you should know about Alder Lake to see if it’s worth waiting for Intel’s next chip or if you should just choose one of the best laptops on the market today. With that in mind, here is what we know about Intel’s 12th Gen processors.

We don’t have a firm release date for when the first batch of chips will drop but we’re expecting early Q4. Some rumors believe the chips will launch during Intel’s InnovatiON event in October. However, according to WCCFTech, Intel told partners that it’s planning to launch Alder Lake S in November.

Intel’s official word is the second half of this year so it has until the end of December to its hits mark, although beating the holiday rush might make financial sense.

The main feature of Alder Lake is its hybrid composition made up of up to 16 cores and 24 threads. What makes this 12 Gen chipset unique is that these cores will be split into two groups: Golden Cove high-performance cores and Gracemont power-efficient cores.

We haven’t seen performance benchmarks (see below for some hints), but Intel promises the ‘big’ x86 performance cores, named Golden Cove, are the most powerful CPU cores it has ever built. As for ‘small’ Gracemont cores, these are “the world’s most efficient x86 CPU core,” Intel claims. The company says in single-threaded tasks, a Gracemont core achieves 40% better performance at the same power as a Skylake core.

This isn’t the first time we’ve seen Intel use this hybrid technique. Lenovo’s ThinkPad X1 Fold is powered by a hybrid chip although that uses an underpowered Lakefield chip with a unique “Foveros 3D stacking” technique comprised of a single 10nm performance core and four efficiency cores.

Alder Lake chips will be built on Intel’s 7 process formerly known as its 10nm Enhanced SuperFin so don’t let the name get your hopes up; Alder Lake has the same node size as Tiger Lake before it. We don’t have specific chip names yet but Intel teased a desktop SoC with eight performance cores and eight efficiency cores (and a total of 24 threads) as well as a laptop chip with six performance cores and eight efficiency cores. The chips will also top out with up to 30MB of L3 cache.

As for features, these include support for PCIe 5.0 with 64 GB/s of throughput and DDR5 memory, doubling the theoretical data rates over the current generation. One advantage these chips gain over AMD rivals is support for Thunderbolt 4, the current fastest USB-C standard for transferring data and connecting to peripherals and monitors. They will also support the latest Wi-Fi 6e standard.

Several benchmarks have leaked, giving us our first glimpses at the performance of Intel’s 12th Gen Alder Lake chips. The most recent, found in the Geekbench 5 database, shows a Core i7-12700 desktop processor scoring 1595 in the single-core and 10170 in the multi-core tests.

If accurate, these would put the new Intel chip at 3% faster than the AMD Ryzen 7 5800X and 13% faster than the Core i7-11700K. Keep in mind that this listing has not been verified and the specs do not match what is expected. The Core i7-12700 should have 6 P-Cores and 8 E-Cores for 14 cores and 20 threads. This listing shows four Gracemont cores as a single one.

It’s worth noting that only Windows 11 PCs will get the best performance and battery life out of Intel’s upcoming Alder Lake chips. As mentioned, the successor to Tiger Lake comes with both performance and efficiency cores, and Windows 11 was built to take advantage of that setup. More specifically, Windows 11 can use Intel’s Thread Director hardware, which determines which core should run which task.

“The Windows 11 thread scheduler is much smarter about dynamically picking the most appropriate core,” said Mehmet Iyigun, Microsoft’s manager for partner development, in August.

As for graphics, Alder Lake will use upgraded Iris Xe graphics though what performance gains it will bring has not yet been revealed.

Which laptops will run on Alder Lake?

As mentioned, Alder Lake will scale from 9W to 125W, meaning it will be found in the slimmest of laptops to the most powerful gaming machines.

Vendors haven’t confirmed any Alder Lake-powered models to us, and they won’t until Intel officially debuts the new processors. However, our sister site, Tom’s Hardware, reported a benchmark leak that suggests Asus is whipping up a VivoBook with Alder Lake-P chips.

This is one potential laptop of what is sure to be dozens, if not hundreds of models running on Intel’s upcoming chipset. Laptop makers typically announce a flurry of new products on the same day Intel makes its official processor announcement. So if you can, it may pay off to wait a few months before buying your next laptop.